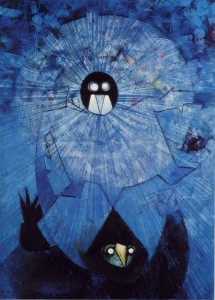 For several years now, the website I read more than any other has been Chateau Heartiste [4], formerly known as Chateau Roissy. I also read Roosh V. [5] from time to time. Both men are highly intelligent, and Heartiste is also a brilliant stylist, with a wicked sense of humor.

But, for all the pleasure and knowledge I have derived from these and other manosphere writers, I am increasingly drawn to the view that the net result of the manosphere is to morally corrupt men.

Paradoxical though it may seem, I also think the manosphere is actually a mechanism by which women morally corrupt men. The manosphere is touted as a way for men to emancipate themselves from the tyranny of feminism, but in reality it functions as a subtle instrument of female domination.

No normal, healthy man would want his daughter or sister to be emotionally manipulated and sexually exploited by a man who is narcissistic, sociopathic, and Machiavellian — or just a garden variety jerk.

However, the manosphere informs us that science, history, and copious anecdotal testimony show that when women are allowed complete choice in the sexual realm — particularly if they can have sex without the threat of pregnancy — they do not simply gravitate toward biologically and mentally healthy men with “Alpha” traits but also to a whole range of “false positives,” ranging from emotionally aloof and unavailable men to jerks and cads to men with severe “dark triad” personality disorders: narcissism, sociopathy, and Machiavellianism.

To correct these problems, we need to roll back sexual liberation by reestablishing social shaming for female promiscuity and, most importantly, involving the family — particularly fathers and brothers — in the process by which women choose suitors and husbands. Involving the family in her deliberations can expand a woman’s awareness and sharpen her judgments by bringing other perspectives into play. Men, furthermore, are better than women at discerning good men from evil ones, and, as I said above, no decent man wants his sister or daughter to be exploited and victimized by bad men. (For all the same reasons, mothers and sisters should involve themselves in the process of selecting suitors and mates for the young men in their families.)

Now, I suspect that manosphere gurus like Heartiste and Roosh are actually with me so far, even agreeing basically with my conservative political agenda.

So why do I think that the manosphere works as a tool by which feral feminine desire corrupts men? Because the manosphere simply takes emancipated female sexuality as a given. Then it teaches young men to adopt the behaviors and mimic the traits that appeal to such women. Young men not only learn about healthy masculine traits but also admiringly analyze “jerkboy” game and “dark triad” cads.

For me, the alarm bell sounded when two young Heartiste readers whom I respect and admire independently offered the same argument: to wit, that I was wrong about a third individual, because he is not Machiavellian, just narcissistic and lacking in empathy. This analysis, mind you, was offered as a defense rather than as an indictment of an infamy to be crushed.

In sum, my concern is that the manosphere teaches young men to emulate anti-social and pathological traits. Women then reinforce these traits with one of the most powerful inducements of all: sex. And, over time, otherwise good men become the kind of men they would never allow around their own sisters and daughters. This is moral corruption. Namely, moral corruption by teaching men to conform to emancipated female desire rather than to correct it.

The manosphere provides the New Right with all the theoretical premises necessary for a patriarchal sexual counter-revolution that reinstitutes traditional and — it turns out — biologically sound norms and institutions to govern sexuality, thereby promoting the individual happiness of men and women and the common good of society and the race in general.

But in practical terms, the manosphere does not promote such a restoration, but instead urges an ethic of “riding the tiger” (or perhaps the cougar), i.e., to personally wallow in — and thus to amplify and advance — the decadence that we are supposed to combat.