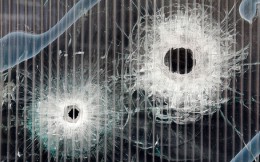 One of the advantages of being a White nationalist is that the world becomes fairly easy to understand. Facts are your friends if you don’t have to ignore or contort them, and daily news is often a script illustrating your political beliefs.

I have no difficulty, for example, understanding why both Detroit and Haiti are bankrupt and violent, whereas for a non-racialist this fact presents a perplexing mystery requiring refined explications of structural inequities and subterranean “legacies of racism.”

White nationalists also have no difficulty understanding Muslim violence in Europe and elsewhere in the West. If a Western nation imports from the Third World an alien population with a religious tradition of hostility to non-Muslims, it can expect violence. Some us may be surprised at the scale and success of Muslim terror in Europe, but the violence itself is hardly mysterious. It has been regularly documented and its increase regularly predicted by Far Right politicians and writers. Some of them have found themselves in court for the crime of stating their evidence and announcing their predictions.

It is a venerable tradition of anti-racist jurisprudence that facts and evidence are immaterial and even criminal if they are arrayed against the program of non-White immigration, which is regarded by its advocates as a moral imperative, not as a policy that a democratic electorate is free to reject if, upon deliberation, it considers the policy inadvisable. A decade ago a political party in Belgium was forced out of existence for the crime of opposing non-European immigration and reporting Muslim crime statistics. Facts were Vlaams Blok’s friends, because Vlaams Blok opposed Muslim immigration, but facts were the Belgian government’s enemies, and since the government could not wish the facts out of existence, it decided, with the assistance of an anti-racist organization, to eliminate the political party that insisted on publicizing them.

At least half of the rapes in Denmark are perpetrated by Muslim men. The percentage may be higher. The preferred targets of Muslim rapists in Denmark are Danish women. Across Scandinavia the figures are even worse. Sweden now rivals South Africa in its rape statistics. It has achieved that distinction through immigration. “This is a story,” Bruce Bawer concludes, “about failed immigration policies and about Islam, which teaches contempt for infidels — especially unveiled women. As Scandinavia’s Muslim population has risen, so have the rape statistics.” Feminists argue that rape is not about sex, but about power. It would be hard to deny their thesis in this case. Muslim rapists are telling Scandinavians what they think of them.

The recent terror attack in Copenhagen is not a strange aberration, but part of an existing pattern. A hostile group has been imported into Denmark, and it has already expressed its hostility through run-of-the-mill crime. A member of this hostile group decided, after a career in ordinary crime, to express his hostility more memorably. But even though Muslim violence and terror should not be a mystery, they are apparently mysterious to the prime minister of Denmark: “We don’t know the motive for the attacks but we know that there are forces that want to harm Denmark, that want to crush our freedom of expression, our belief in liberty.”

Before we mock Helle Thorning-Schmidt, and before we accuse her of plagiarizing the Collected Works of George Bush, we should note the formal and informal constraints that effectively prohibit any sensible statement from her.

We now live, throughout the West, in a cultural and political environment governed by the improbable doctrines of anti-racism. Under a regime of anti-racism stating the obvious is impermissible and sometimes criminal if the obvious undermines the anti-racist consensus on race and nationality. Even if in secret Helle recognizes the obvious explanation of the recent terror attack on her country, she could not state the truth without instantly transforming herself, as though by magic, from a mainstream social-democrat into a Far Right extremist — that is, a Dane endowed with basic common sense and willing to apply his or her basic common sense to matters of political significance, even if those matters involve race and culture. Thorning-Schmidt would also be tacitly acknowledging that a substantial portion of Denmark’s population really shouldn’t be there and that Denmark would be a better place if they had never arrived. Facts, in her world, are dangerous enemies, so she resorts to ascribing a Muslim terror attack to amorphous “forces” opposed to Danish liberty and mysteriously hostile to Jews.

Islam’s hostility to Jews is especially troubling for the political mainstream. Anti-racism privileges minorities. It knows what side to attack and what side to defend in a conflict between White and non-White. Muslim rapes of non-Muslim women may be an embarrassment, owing to our traditional opinions about rape, but they present no serious difficulty for a convinced anti-racist, who knows that the cultural and racial diversity Muslims bring is well worth any suffering individual Muslims may cause. A member of a racial minority is a valuable part of the post-national state simply by virtue of his presence. His difference itself is his principal value, regardless of either his accomplishments or his crimes. The real enemy of anti-racism is not the alien criminal plying his trade and committing his preferred offenses, but anyone who would unethically, with racial malice aforethought, exploit the fact of his crimes for the purpose of defending historic nations and discrediting the globalist plan to end them.

But when the Muslim minority attacks the Jewish minority, the system faces a crisis. The inflexible rule that the minority should be privileged makes it difficult to respond, since there are now two minorities in conflict, one visibly brown and the other visibly white. Hence again the advantage, from the perspective of practical politics, of Thorning-Schmidt’s hastily concocted and implausible account of amorphous forces, inspired by no discernible motives other than a dislike of liberty, mysteriously descending on Copenhagen.

For Jews and their admirers the default narrative’s intentional imprecision is disturbing. Jews and Jewish organizations are overrepresented among the forces working to criminalize peaceful opposition to the Muslim invasion of Europe. Brigitte Bardot, for example, faced Jewish anti-racist organizations in court when, in 2008, she spoke out about Islam; it was the fifth time she had faced legal punishment for “inciting racial hatred” by expressing her opposition to Muslim immigration and her disapproval of Islam, which she believes is destroying France and “[trying] to impose its own laws on us.” That is the normal pattern. A European publicly speaks critically of Islam, committing the thought-crime of “racism,” and anti-racist organizations, many of them financed or staffed by Jews, descend upon him. A hate-speech conviction often follows, as it did in Bardot’s case. But now Jews find themselves in a Europe where the anti-racist rule of willed or coerced silence about Islam inhibits the open expression of a truth they want to have publicized. Muslims really don’t like them. Some Muslims want to kill them. They also want to kill Europeans, but if a jihadist has a choice between killing a Jew and killing a European, he would prefer to kill a Jew.

Jews in Europe face an unpleasant dilemma. Right-wing Europeans, not even a thought-criminal like Brigitte Bardot, do not shoot up their synagogues and kosher markets, but members of a group they have often defended, as part of their ambition to turn European nation-states into collections of squabbling minorities with no cohesive race-cultural character, do shoot Jews and will likely kill more in the future. Yet the system Jews have done so much to create is reflexively reluctant, for reasons both of anti-racist principle and political expedience, to name their enemies and describe their motives.