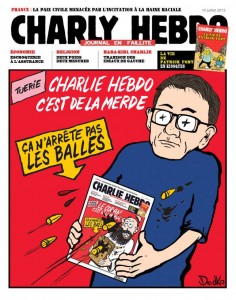 In the wake of the Charlie Hebdo tragedy, more than ever politicians, media and elites reiterate that only a small (indeed, tiny) minority of Muslims commit acts like the recent Paris attacks.

First of all, we must observe that this is not a statement of fact, but rather an expression of hope.

For we don’t know the number or percentage of would-be terrorists that the Muslim population in each Western country harbors.

Because to know how many they are would also mean knowing who they are — all of them — in which case we would have solved the terrorist problem with closer surveillance or, much better, expulsion.

So, almost by definition, we haven’t got the faintest idea of their number.

We can’t even rely on the figure of aggressions actually carried out as a good indicator, because this is only a fraction of the total of terror attacks planned, most of which have been foiled by police and secret services: many of these we haven’t even heard about. And the total number of planned offensives, prevented or executed, doesn’t offer predictions about future ones in such uncertain circumstances.

What we do know is that in several [2] countries [3] Muslim immigrant populations tend to get more radicalized [4] with each successive generation [5], so the threat is going to increase. This can explain the by-now thousands [6] of jihadists travelling from Europe to fight in Syria and Iraq and often returning to Europe with terrorist training and intentions.

If what happens in the rest of the world, where Islamism and its violence are on the rise [7], is an indication for the West, the prospects are not happy.

But, even if the number of terrorists were indeed a tiny minority of the West’s Muslims, this wouldn’t alter the fact that there is a question to be answered: why? Why take the risk? Why deliberately expose innocent Westerners to the threat of being massacred?

We know — nobody disputes it — that Muslims periodically take up guns, explosives, airplanes, or what have you to terrorize and slaughter people in buildings, cafes, trains, buses, and stores in various Western countries.

We also know that no other group approaches the same level of public, direct physical menace.

We can’t even say that Muslims belong in Europe, that they have a traditional or cultural foothold on European soil. In fact, they have been our enemy throughout their history. Even Spain and Sicily were invaded and conquered by Muslims, but didn’t welcome them.

I know I’m stating the obvious here, but, from the way the talking heads and pundits speak and write, it appears that it needs to be stated.

Something else that public figures are pleased to repeat is that most Muslims condemn this act. In reality, there is no evidence for that either. I haven’t heard of any Muslim demonstration against it. 82% of French people think that Muslims are showing no condemnation [8] of terrorism in France.

One fact of life we’ve learned by induction is that shouting “Allahu Akbar” is a sure sign that every deed accompanying or following this utterance is of non-Islamic nature, as every time this sequence occurs we are guaranteed that the action is not just non-Islamic but — more strongly — un-Islamic. Such an episode occurred [9] just before Christmas, also in France, when a man plowed his white van into a Christmas market crowd in Nantes screaming “Allahu Akbar,” injuring dozens of people — the third incident of its kind in the country in a few days. The man was correctly not described in the newspaper report as Muslim. He might have been anything.

So, is there a benefit — it must be very, very secret as nobody has ever heard of it — that Muslims bring to our lands that compensates for and outweighs the recurring nightmares that they produce and could be even more tragic and numerous if it were not for the enormous expenditure on police [10] and intelligence resources deployed to keep their threat at bay, public-purse money that our over-indebted countries cannot afford?

Not only there is no such benefit. There are indeed additional burdens. Mostly these are not typical of Muslims only, but of general Third-World and mass immigrants. Indeed the problem of the former and the latter are related and difficult to separate. But, since Muslims represent a more specific threat to life and limb than other immigrant groups and there is widespread acceptance of Islam specifically as a negative presence in Europe, this could be a good starting point to tackle the seemingly-intractable immigration question.

A UK 2012 poll found that Britons are far more strongly opposed to immigration, particularly from Muslim countries [11], than they have been at any time in recent memory. An October 2014 survey showed that three out of four Londoners (74%) think that Britons who have traveled to Syria or Iraq to fight with extremist groups should be banned from returning to the UK [12].
Here are some issues:

Yet for our leaders and commentators the possibility of a Muslim-free Europe is not even a remotely conceivable possibility. Listening to them is a surreal experience: they talk as if Muslim presence in our countries were an ineluctable fact of life, like death and taxes, and not a deliberate choice of corrupt politicians and self-serving elites.

They make you feel as if Muslims had profound roots on our soil and were part and parcel of Western civilization, both of which are as far from the truth as they can be.

Maintaining the Islamic presence here is for them the Kantian categorical imperative, nay it’s more than that: it’s a religious commandment. “Thou shalt welcome, feed, house and accept to be killed by Muslims, and never reject or deport them en masse.”

Whereas the sensible solution would be to stop Muslims from taking up residence here and expel those who have already done so.

In fact, credit should be given to ‘Amru Adib [24], a very popular Egyptian TV show host, for this remark he made after the Charlie Hebdo attack:

He asked pious Muslims who cannot tolerate a word against Islam, “So why are you, of your own free will, moving to these godless nations[the West] in the first place.”
During the same show he pointed out that, to many Muslims, the fact that the Egyptian president Sisi entered a Christian church on the eve of January 7, the Coptic Christmas, demonstrates that he must be an infidel. The Salafi party immediately said: “We will never congratulate the Christians on their festivals. What’re you crazy?!” Adib answered these many Muslims by saying:
Okay, I get it, you hate Christians. But can you please be consistent? Why do you cooperate with them in other regards? Why do you go to their nations [reference to the West]? Why do you go to their doctors? Please, let your hate be consistent.”

In short, our situation is not very far from collective madness, although I can spot a few signs that greater numbers of people, at every new atrocity, find it increasingly difficult to believe in the TV and newspapers interpretations more than in what their own eyes and ears tell them.
Source: http://enzaferreri.blogspot.com/2015/01/what-more-reason-do-we-need-to-stop.html#axzz3Opw5SiC3 [25]