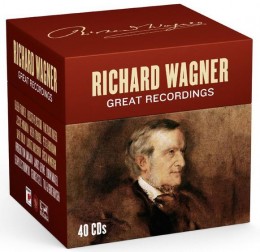 Frankly, it strikes me as bizarre that Tristan and Tannhäuser were excluded, since they would have taken only 6 or 7 more discs.

Furthermore, the performances of the operas they did include are always serviceable, but only Marek Jankowski’s 14-CD Dresden Ring Cycle is really top-drawer: beautifully recorded, conducted, and sung. But where else can you get an excellent Ring Cycle for under $16? Even if you never listened to the other 26 discs, it is still an amazing bargain.

I already had the Jankowski Ring, which I will now pass along as a gift. But I did not have any of the other opera recordings. The Flying Dutchman features James Morris, Deborah Voight, and Ben Heppner and is conducted by James Levine. Lohengrin, recorded in 1965, features Sándor Kónya and is conducted by Erich Leinsdorf. Die Meistersinger was recorded in 1963 and conducted by the great Joseph Keilberth. The Parsifal is a historic recording from 1961 conducted by Herbert von Karajan and featuring Christa Ludwig, Walter Berry, Hans Hotter, and Eberhard Waechter. At the very least, all of these recordings are interesting, and I have many hours of pleasure ahead of me.

Again, if you have ever considered buying just one of these discs at full price, you can consider the other 39 discs as a bonus.

This collection comes in a sturdy cardboard cube. The discs are housed in thin cardboard sleeves which reproduce the original record albums. The only place Sony scrimped is by not including libretti, but these are just a Google search away.

This is one of the great bargains in the history of classical music. Originally priced much higher when it appeared last year for the Wagner bicentennial, the drastically cut price indicates that this collection will not be around much longer.