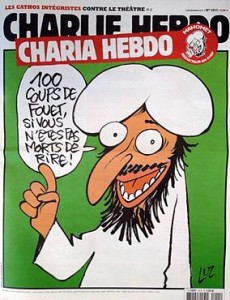 Sharia Hebdo: One hundred lashes if you don’t die of laughter.

If this isn’t war, it sure does look like one, as we have said for some time now.

Charlie Hebdo has payed the price for liberty of expression. We don’t think much of the Left-wing media (or the Right-wing media), and the same goes for this journal of caricaturists and satirists who make their living wallowing in filth. The journalists at this rag don’t like us, and the feeling is mutual.

But we must recognize that these guys have balls, unlike most of their fellow bien-pensants. They are practically the only ones to denounce Islamism, which has declared a war unto death against us. They have now paid for it with their lives. And so today we say “RESPECT” as the “youth” of the ghetto would say.

It is ironic. The PC police have been attacking Eric Zemmour for weeks now because of his book Le Suicide français, and more recently, against Michel Houellebecq for his novel Soumission. Hate against “the other,” Islamophobia, Pétainism, nauseating views, redneck attitudes, paranoid delusion, etc. What about the attack on the police commisariat of Joué-lès-Tours, and the cars murderously driven into the Christmas markets (how symbolic) in Dijon and Nantes? The work of “Unstable People” who should be pitied rather than condemned, certainly.

No one can repeat this foolishness with the Charlie Hebdo attackers: they are pros! We are only beginning to pay the price for this nonsensical policy that brought dozens of millions of North African immigrants (among others) and which has prepared the terrain for Islam. The responsibility of Western elites is enormous: this can only end in a ethnic-religious war. We have denounced this for decades.

Day after day, more and more, the news reveals how right we have been about this.

For now, we have entered the time of compassion. This will be coming from the President of the Council of French Muslims, Dalil Boubakeur, from the President of the CRIF [the French ADL], Roger Cukierman, who will be followed by all the acolytes of the multi-cult. The strains of the waltz of the hypocrites and incompetents can be heard again. Soon we will see “candle light vigils” in each town of France, uniting the Right and the Left, the Jews and the masons, the Cathos and the atheitards. The Muslims, however, we will count on both hands. And they will march arm in arm to defend the “Values of the Republic” and “Democracy.”

Once the tears have dried, we can count on our directors of conscience to assure us they will work to “bring us together” (“society is to blame”), and that these attacks have nothing to do with the Islam of France which is totally tolerant, that we shouldn’t stigmatize a whole section of the population, and that immigration has nothing to do with this. There we have it!

And dear mother Merkel will once again denounce the PEGIDA movement and call for more immigration to repopulate Germany.

Pope Francis will continue to teach Europe a lesson, because of their “egotistical” refusal to welcome millions of immigrants of all colors.

Damn it! When will they understand that we are already in war that they still don’t see?

Pierre Vial (b. 1942) is the leader of Terre et Peuple http://www.terreetpeuple.com/ [5] and one of the most important thinkers of the identitarian movement. He is considered the principal representative of the “neo-pagan” tendency of the identitarian movement, with his association Terre et Peuple which he founded in 1995 and has presided over ever since.