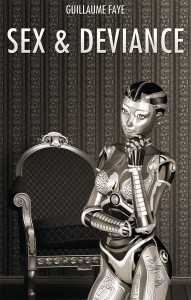 Recent events have underlined once again that Islam is dangerously incompatible with what many refer to as Western values. The murder of several employees of the French magazine Charlie Hebdo is a violent reminder of this fact.

But it is interesting that some commentators (myself included [3]) are starting to notice that the “Western values” represented by the likes of Charlie Hebdo are actually completely at odds with anything that could be considered authentically European. Arktos Media’s new translation of Guillaume Faye’s Sex and Deviance is a welcome and timely contribution to this ongoing discussion. Faye is clear that Islam’s anachronistic attitudes towards sex and sexuality are explosively at odds with Western sexual mores, and furthermore that the West’s current sexual mores are themselves a deviation from traditional Western values. His insistence that the individualism of Christianity is at the root of the West’s present sexual ennui is likely to make this book as controversial with social conservatives as it will be with the Islamophiliac left.

Faye’s central concern is the decline of the family and the consequent reduction in the European birth rate. This is the touchstone to which all of his judgments return. If something is judged to be harmful to the birth rate then it is harmful per se. But this focus leads to some surprising conclusions, particularly his relaxed attitude to homosexuality, a subject of some division on the outer reaches of the right. Faye says that his judgement is guided by the Aristotelian mean and this allows him to seek a balanced and healthy path between, on the one hand sexual moralism, and on the other sexual incontinence.

Faye places the family at the center of his discussion because it is the necessary and best developed means of continuing the lineage. The irresistible trend of recent decades has been to undermine the stability of the family in favor of individualistic pleasure seeking. This has resulted in fewer marriages and fewer births as individuals rotate amongst a series of sterile sexual relationships. The properly conjugal element in sexual relationships has largely disappeared and this is something that fatally disrupts the social primacy that should be accorded to reproduction. For Faye, “The couple is not an isolated romantic duo but the central pillar in the architectural structure of a family” (26).

But in order to strengthen this structure he does not advocate a return to conservative family values as such. Or rather, he does and he doesn’t. What he wants is a candid recognition that there are several different types of love (sexual, familial, romantic, etc.) and that they have become confused and conflated in detrimental ways. He regards the bourgeois family as the model of a balanced and secure framework within which to rear children. But crucially, he is alive to the necessary hypocrisies that exist within that model and that allow it to function. In this sense, he argues for a distinction between conjugal love and sexual love, the latter (in the form of adultery or prostitution) being necessary for the former to function well. Not surprisingly, he thinks that such an outlet for sex outside of marriage is more necessary to men than women, although he allows for the latter case.

To some this will smack of a deft form of doublethink, allowing for conjugal fidelity to be maintained by excluding sexual infidelity from the reckoning. A smart excuse for priapic intellectuals. But it must be admitted that there is a strong element of pragmatic sexual Realpolitik to it. What made it possible in centuries past was the strong taboo against discussing sexual matters openly. This is why (as Faye correctly notes) divorce was always much more scandalous than adultery; it was socially unacceptable, whereas infidelity remained outside the purview of society. In the present context where no one can ever shut up about their own sexual concerns for more than five minutes at a stretch, it is difficult to see how such a form of necessary hypocrisy could endure. What is essential for its operation is a certain discretion concerning sexual matters, so that they do not emerge into explicit discourse. And this is surely why so many taboos are enforced so strictly. Once an explicit argument is made for such a system then its hidden aspects are brought to the fore, destroying the division between private and public. None of which means that adultery is any less prevalent now, simply that its effects are experienced as devastating rather than being kept out of mind.

In his discussion of homosexuality Faye carefully distinguishes between the practice itself and the promotion of homosexuality as an ideological norm that is being used to undermine the family. Although he sees male (though interestingly, not female) homosexuality as a pathology, it is not in itself a particularly harmful one. By contrast, the ideological exploitation of homosexuality, and issues such as gay marriage, are pernicious dogmas that actively undermine and devalue the importance of the family: “Homosexual unions will always remain a marginal phenomenon with few demographic effects, practically none of which will have any influence on the biological composition of Europeans. Moreover, as is the case with everything that is against nature, the homosexual couple does not last. Gay marriage only poses a problem because it is part of an ideological (not biological) dissolution of the natural order” (60).

As evidence for the pathological nature of homosexuality, Faye notes the narcissism of the various “pride” marches held around the world: “Why be ‘proud’ of being homosexual or bisexual?” he asks, noting that such displays betray a “deep infantilism. One can be proud of what one has become, of what one does, of one’s capacities, but to declare oneself proud of one’s sexual orientation is to set the bar for pride pretty low” (51). Despite this, Faye is entirely tolerant of any sort of homosexual or bisexual practice carried out in private. His concern is only with the ideological use to which such tendencies are being put. Regardless of whatever views one might have on the subject, Faye’s arguments are consistent, honest and balanced. It is telling, and very depressing, that his discussion of homosexuality is prefaced with the following remark: “In saying these things, of course, I am conscious of contravening the laws which limit freedom of expression in France” (46).

When Faye describes homosexuality as “against nature” he does so from a biological, rather than a moral perspective. But Christianity is quite different. It sees homosexuality as morally wrong because the individual is deviating from nature. And here Faye identifies the fundamental problem with Christianity, and the root cause of our present sexual confusion. Faye points out that Christianity condemns individual lapses such as homosexuality but is perfectly content with collective lapses such as racial blending. In fact, Christianity has nothing to say about the racial mixing of different peoples and Faye contrasts this with his own preferred Aristotelian view which tolerates individual predilections such as homosexuality, but forbids collective aberrations such as relations between distinct peoples. The problem with the Christian viewpoint is that it sees man as superior and distinct from the rest of nature. Faye terms this “anthropological irrealism” (263). Rather than existing within a wider contextualizing spectrum of natural evolution, man is seen as a special case. It is an error that, in its secular form, has led to the present obsession with equality. All people are sacred and therefore all people are equal. In that case, then, communal concerns become irrelevant when considering who to marry; instead, one should just follow one’s heart and marry whomever one becomes infatuated with, regardless of any wider considerations.

The other religion that Faye pays close attention to is Islam. For the purpose of his discussion, the important distinction between the two is that Christianity is an insidious corrosive that rots from within, whereas Islam is a wholly alien faith that can only cause explosive conflict. Faye is clear that the reason for Islam’s radically alien character is racial rather than spiritual. Religion emerges from a particular people and embodies their existing characteristics. What shouldn’t be surprising is that the importation of large numbers of Muslims who have very, very different notions of gender relations into post-feminist, sexually-liberationist European countries will be a disaster. That political leaders of all stripes are unable (or unwilling) to see this is to their eternal shame.

No doubt, if Faye had written his book a couple of years later he would have made some reference to the Rotherham scandal. Over a period of 16 years at least 1400 (a conservative estimate) white girls were sexually abused (including being drugged and raped, and trafficked) by Pakistani men whilst the authorities did their best to cover up the crimes. The reason for the cover up essentially boils down to a fear of being called racist. Some social workers insisted that the rapists were actually the girls’ boyfriends (despite the fact that the girls were children and the men were clearly several years older), whilst a Home Office researcher who did make reference to the rapists’ ethnicity was warned never to do so again and was sent on a diversity course as penance. The whole sordid affair illustrates Faye’s assertion that, “the media only emphasize ‘sex monsters’ of Gallic origin. The goal is to provide aid and comfort to the propaganda which says that sex crimes (and other crimes) ‘come from all milieus’” (206). Post-Rotherham we can confidently add that politicians and police will actively assist the media in covering up such crimes. The attested reality of Rotherham suggests that Faye is not overestimating the scale of the problem.

Despite some of Faye’s controversial views it is obvious that his concern is largely for protecting such victims from unnecessary predation. He writes, “we should consider the daily unhappiness of these young girls and adolescent boys . . . who get up every morning to go to school and who have to confront the barbarians, sensing that they are not protected by the authorities of their own country (marshmallows who have abdicated all responsibility) and without the young men of their own nation – unmanly, fearful, unworthy of their ancestors – daring to defend them” (164). He also makes the valuable observation that, “the life of a woman, especially a young woman, counts for more than that of a man . . . simply because she is a mother, in charge of reproduction and the upbringing of offspring” (119).

Such observations reveal Faye to be in total opposition to the prevailing orthodoxy, an orthodoxy that will do nothing to protect our women and children, and that will, in an outrageous inversion, identify you as a hateful extremist if you speak in favor of such protection.

This is a radical book in many respects. Even its insistence on a division between private and public is radically at odds with a social norm that has outsourced domestic life to various media, social networks and other technologies. Above all, Faye has written a book that seeks to redress the imbalance of modern sexual mores and to install the family once more at the heart of such considerations. It also seeks to reinstate the virtue of communal considerations above purely individual ones. These aspirations transcend any ideology, whether of the left or the right, because they are attuned with biology and nature. Such wisdom is surprisingly hard to come by nowadays; Sex and Deviance should be read by anyone who seeks it.