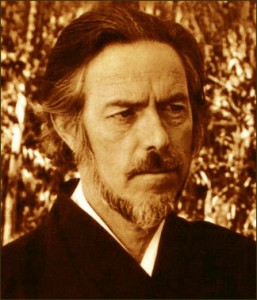 Alan Watts is one of my favorite writers. Today is his 100th birthday.

Born in Chislehurst, Kent, England, Watts was raised an Anglican, but became a Buddhist at age 15. In 1941, while Watts was living in New York City, his first wife Eleanor had a mystical vision of Jesus. This led him to return to Anglicanism.

Watts’ writings fall into four periods. First are his early Buddhist works: The Spirit of Zen [3]

(1937); and The Meaning of Happiness: The Quest for Freedom of the Spirit in Modern Psychology and the Wisdom of the East [5]

Then there are his Anglican works, where he tries to synthesize Christianity and Eastern thought. The high points are Behold the Spirit: A Study in the Necessity of Mystical Religion [6]

(1948) and The Supreme Identity: An Essay on Oriental Metaphysic and the Christian Religion [7]

Watts’ third period commences with The Wisdom of Insecurity [8]

(1951). He abandoned Christianity as a framework and focused on Buddhism, Vedanta, and Taoism. Works from this period include The Way of Zen [9]

, (1961) The Joyous Cosmology: Adventures in the Chemistry of Consciousness [14]

(1963), culminating in his most brilliant works, Beyond Theology: The Art of Godmanship [16]

(1964), in which Christianity is situated within the Vedantic context as a mode of maya, and The Book: On the Taboo Against Knowing Who You Are [17]

Finally, I discern a fourth period in Watts’ writings, in which systematic thought is replaced by essayistic and poetic play. This period commences with Nonsense [18]

(1967) a book of whimsical doggerel, and it includes Does It Matter?: Essays on Man’s Relation to Materiality [19]

The best sources of information on Watts’ life are his autobiography, In My Own Way and Monica Furlong’s biography Zen Effects: The Life of Alan Watts [24]

(also published under the title A Genuine Fake [25]

Watts was the primary interpreter of Asian philosophy to the beatniks of the 1950s and the hippies of the 1960s. His interpretation of Asian thought was uniquely suited to a self-indulgent and hedonistic age, but this is no reason to dismiss it, for it is actually consistent with both Eastern and Western orthodoxy and individually verifiable spiritual experience, not to mention the fact that we actually do live in the Kali Yuga, the age of chaos and disintegration in which dark forces must be harnessed for spiritual attainment (the so-called Left-Hand Path).

But there was a dark side to his sensualism: a dimension of compulsion and addiction. Watts married three times, divorced twice, and fathered seven children. But as a family man, he was a success only in the most minimal Darwinian sense. He was a compulsive womanizer and a neglectful father, which caused his wives and children much pain. Like many products of the British Public School system, with its repulsive traditions of beatings and bullying, Watts had a streak of sexual masochism. He began smoking as a child and never stopped. He was also a serious alcoholic. Watts’ father lived into his 90s, thus it was a very real possibility that Alan Watts could have celebrated his 100th birthday with us today, with 50 more books to his name, had he been just a bit of an ascetic, had he controlled his sensualism rather than letting it control him.

Politically, Watts was a man of the right. In his youth, he was a follower of the mysterious Serbian guru and operator Dimitrije Mitrinovic, an advocate of such quasi-fascistic ideas as Guild Socialism, Social Credit, and European Unity (as long as it was not Hitler who was doing the unifying). Watts also claimed that he returned to Anglicanism largely out of conservative motives, searching for tradition and security in a world in disarray. In The Supreme Identity, he offers an absolutely withering Traditionalist critique of the basic premises of liberalism.

Watts’ main problem with Christianity is that it chafed against his emerging sexual libertinism. But there were intellectual reasons as well. In the late 1940s, he began reading the Traditionalist writings of René Guénon and Ananda Coomaraswamy, who assimilated Christianity — along with Taoism, Buddhism, and Vedanta — to the universal Tradition, undermining the Church’s claim to exclusive truth. (There is, by the way, no evidence that Watts ever read Julius Evola.)

Finally, the Traditionalists convinced Watts that we are living in the Kali Yuga, and he explicitly claimed that he left the church to find a spiritual life more in keeping with the age.

Watts’ most Traditionalist book is The Supreme Identity [7] (1950), a beautifully written but very dense and rigorously argued synthesis of Traditionalism, with a special reference to Christian theology, which is logical given his background and audience. Watts’ next book, The Wisdom of Insecurity [8] (1951), is a much more “popular” work, but it still uses the Traditionalist language of “realizing” (as opposed to knowing) the ultimate identity of self, world soul, and being.

Although Watts found Traditionalism useful in liberating his mind from Christianity, he ultimately rejected it. In the Preface to Beyond Theology [16], he explains his reason. Traditionalists claim that Christianity is just an exoteric expression of the one primordial tradition which is the inner truth of all religions. But Watts points out that there is no evidence that the founders of Christianity thought that way. Instead, Christianity has always insisted on what Jan Assmann calls the “Mosaic distinction” between true and false religions. Christianity is the one true religion, and all others are simply false. Thus in The Supreme Identity, Watts treats Christianity as an expression of primordial truth, but in Beyond Theology, he treats it as a mode of illusion.

Why remember Alan Watts’ centennial on a New Right/Traditionalist website? A more telling question is why Watts’ centennial seems to have been forgotten virtually everywhere else [26]. Perhaps because he died before he found his true audience.