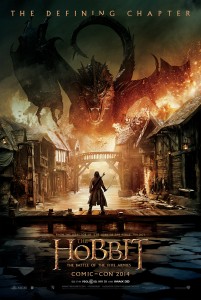 In his remake of King Kong, Peter Jackson dragged out the big ape’s death so long it felt like a lifetime. At the time, it merely seemed like a lapse of taste. In hindsight, it seems like the beginning of a whole new career characterized by megalomania, greed, one-upmanship, self-indulgence, and bad taste. It was just the first symptom of the dragon sickness that has now consumed him.

The Battle of Five Armies begins with Smaug giving Laketown the Dresden treatment, then moves on to a grand battle between elves, orcs, dwarves, and men, with some birds and bears and bats and wizards thrown in. There is also a battle of Sauron and the nine spectral Nazgûl against Saruman, Galadriel, and Elrond. In short, the movie is mostly fights and special effects: beautifully made, occasionally memorable, but empty overall.

As I noted in my reviews of the first two movies, The Hobbit is a children’s novel that is shorter than any of the three volumes of The Lord of the Rings. It could be told as a single two hour movie. But why settle for just one billion-dollar movie, when you can mutilate the book, turn it into three two-and-a-half hour movies, and rake in three times the gold? Jackson merely had to pad out the story with new characters, new scenes, and new subplots, all of them paper-thin, manipulative, and melodramatic. He also added new battles, new chases, and new narrow escapes, all of which are spectacular to watch but about as realistic as Road Runner cartoons. The net effect is uninvolving.

To make matters worse, much of the new material is derivative of The Lord of the Rings. Either our filmmaker lacked inspiration, or it was simply an occasion for Jackson to one-up himself. You thought the crumbling Bridge of Khazad-dûm was cool in The Fellowship of the Ring? Well, wait until you see the falling tower in The Battle of Five Armies. Did you like the orc Aufmarsch from Minas Morgul in The Return of the King? Well, something all too similar (but less spectacular) awaits you here. Like the sandworms of Arrakis? Wait till you see the wereworms of Middle Earth. Did you like Galadriel’s dark queen tantrum in Fellowship? Well, she tops that here too. Etc., etc. Unfortunately, when you combine derivativeness and one-upmanship, the result is parody.

Finally, as Kevin MacDonald pointed out in a review [2] of The Hobbit’s first installment, Peter Jackson has caved in to political correctness. In The Lord of the Rings, he was faithful to Tolkien’s vision, portraying the peoples of Middle Earth as white and the human and non-human hosts of Sauron as non-white. In the first Hobbit movie, however, Jackson introduces white-skinned (and even blue-eyed) orcs and goblins. In the second film he includes non-whites—Asians and blacks or Papuans—among the citizens of Laketown.

In the new film, the women and children of Laketown—like those of Rohan in The Two Towers—are barricaded in a hall while their men fight. This, of course, makes sense, because biologically speaking, men are more expendable than women in a fight for survival. In the new film, however, a mannish suffragette rallies the women to go off and die with the men. At least the connection between feminism and racial suicide is relatively clear here. (And before you remind me of how Eowyn disguised herself as a man and went into battle in The Return of the King, let me remind you that Athena, Joan of Arc, and Eowyn are exceptions, not rules, and exceptions should never become the rule.)

When the characters are not scurrying around fighting one another, The Battle of Five Armies dwells at length—but without depth or a hint of self-knowledge—on how greed corrupts integrity. The whole wretched trilogy is ample proof of that.