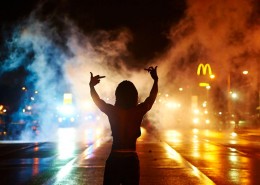 Journalists are also responsible for hunting down dissenters from the Narrative and trying to destroy them. They are the System’s foot soldiers. They are a control mechanism. And they know exactly what they are doing.

Though it is for some reason seen as more appropriate to kill a soldier than a journalist in war, this reflects a mistaken view of moral responsibility. A soldier obeys the orders of his government and lives by a certain code. Even enemy soldiers can recognize the honor of the profession of arms and grant each other certain rights once they are captured or disarmed. Leaving aside senior officers, soldiers don’t bear moral responsibility for the decisions of their governments.

As Abraham Lincoln put it, “Must I shoot a simple-minded soldier boy who deserts, and not touch a hair of the wily agitator who induces him to desert? I think that in such a case, to silence the agitator and save the boy, is not only constitutional, but withal a great mercy.”

Count this Traditionalist with the Great Emancipator in this case.

A politician is responsible for certain policies, but even the President of the United States is relatively powerless when it comes to determining the overall state of the culture. And a politician is limited in his freedom of action by that culture.

Be it under our collapsing system of multicultural tyranny, the “night watchman” state of libertarian imagination, or under a racialist system of nationalist dictatorship, a technocrat like Mitt Romney would largely serve the same function. If you changed nothing else, replacing all of Congress would simply yield a new crop of disposable politicians that would impose the same policies.

Every citizen bears some minimum amount of responsibility for the society in which he lives and the privileges he enjoys thereby, unless he is actively rebelling against it. Soldiers and government employees bear a greater share of responsibility, but even they don’t actually determine the course of the state. Ultimately, those who shape the circumstances that constrain politicians are those who bear ultimate responsibility.

Unfortunately for us, determining just who “holds the strings” is difficult in a modern democracy – and, as Chuck Klosterman has noted, it makes “revolution” in the traditional sense all but impossible [2]. Many Identitarians or Traditionalists would point at financiers and others who control the flow of money to political actors as those who hold the ultimate responsibility. And even mainstream political activists understand that donors and financiers are more important than almost any one politician, with the Koch brothers a target of the American Left and George Soros a hate figure for the American Right.

Yet this is also unsatisfactory. While there is much we do not see and we can all think of exceptions, it seems likely that your average Wall Street millionaire is more concerned with protecting his own financial interests than executing some grand agenda. Unless we are willing to accept the charge of Ward Churchill that those who work in high finance are “little Eichmanns” by virtue of their very industry, it seems premature to hold each one of them personally responsible for what we don’t like about the world. (I note in passing that I use Churchill’s metaphor here without endorsing the insult to Adolf Eichmann.) While it seems clear that international finance as a system is responsible, it’s a bit more difficult to track down which individuals bear culpability.

This isn’t the case with journalists – they sign their work. A journalist actively seeks to shape policy. They lie, conceal information, and try to destroy the lives of individuals who obstruct their ideology. They cause incalculable human suffering. They coordinate with their fellows to perpetuate the anti-white Narrative. They demand exemption from violent reprisal even while benefiting from the use of violence by others. It is far less dishonorable to execute an enemy journalist than an enemy soldier, or even an enemy spy.

In the one-sided race war [3], journalists have blood on their hands.

As of this writing, Ferguson, Missouri is already in a state of emergency because of the upcoming grand jury decision on the fate of Officer Darren Wilson. At this point, the media’s Narrative about an innocent “Gentle Giant” ruthlessly executed by a violent, racist cop has been utterly discredited by the facts. Indeed, the main reason why people are expecting rioting is because it seems likely that Officer Wilson will not be indicted.

Yet the media is still sticking to its overall frame that there has been a Great Injustice in Ferguson and whatever violence and destruction results is somehow justified. However, in its essence, this is nothing but a call for lynch mob violence. And unlike many lynch mobs of the past, this is a call for violence against a man whom most objective observers now concede is not just innocent, but acted bravely. Furthermore, these actions are coming from a community that almost defines itself by its willingness to use violence against each other and everyone [4] else [4].

Who is responsible? Barack Obama, who has evidently been meeting with the riot organizers [5], has some responsibility, as does Eric Holder. Community activists themselves bear much of the blame, as do the rioters. However, I largely consider these looters agency-free – it is in the nature of lower-class blacks to riot, loot, and destroy, and given license for whatever reason, that is what they do.

The reason we are even discussing this is because of journalists. The media is not a check on the power of the System, but one of its pillars. Reporters know full well that the path to success isn’t serving as a check on the state, but hunting down and shaming the state’s enemies and dissidents from multiculturalism. Insofar as we can blame anyone for what is about to happen, we should blame then. And if the time comes where we can enforce real change, we should remember who made it necessary.