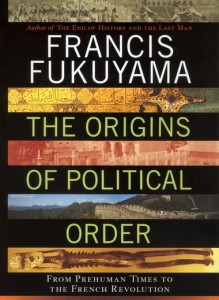 [1]Francis Fukuyama
The Origins of Political Order: From Prehuman Times to the French Revolution [2]

There’s so much meat in Francis Fukuyama’s The Origins of Political Order that someone could teach a college class on it, and someone should. It’s an expansive study of different political systems that attempts to develop a general theory of political development, and explain why different societies have formed different kinds of states — or none at all. The author also offers some explanations for why state-building efforts in the developing world have produced mixed results.

Fukuyama intended The Origins of Political Order to build on his mentor Samuel Huntington’s Political Order in Changing Societies, but it would be just as comfortable on a shelf beside Spengler’s Decline of the West or something like Toynbee’s A Study of History. It’s engagingly written and lacks the kind of obsessive moralizing or contemporary political obsessions that would make it tedious. Fukuyama does have the academic’s habit of giving us more than we need — probably to ward off academic critics. The Origins of Political Order has also been recently followed by second volume, Political Order and Political Decay: From the Industrial Revolution to the Globalization of Democracy [3]

While clearly an advocate of modern liberal democracies — or what people call modern liberal democracies — Fukuyama is no chauvinist in this regard and does not present political development as a linear, inevitable path to the revelation of modern, liberal democracy. Rather, he sees modern political systems as having three main features — state formation, rule of law, and accountability — that may or may not be present in many reasonably successful political orders. He argues repeatedly that while China formed the first true state, the Chinese have never had true rule of law or downward accountability.

Fukuyama begins by looking at pre-state societies and addressing what he calls the “Hobbesian fallacy” — something I also touched on in The Way of Men. Humans have always lived in groups. We were not “primordially individualistic” creatures who evolved alone in a brutish world and then entered into society as the result of rational calculation at some later date — trading freedom for safety. We’ve always been social animals, and our pre-human ancestors were, too. Yet this idea of primordial individualism “underpins the understanding of rights contained in the American Declaration of Independence and thus of the democratic political community that springs from it.” To truly understand human political behavior, it’s important to correct mistaken notions about human nature and how the most basic political orders form.

The most basic human society, according to Fukuyama, is the “band.” A band society is a small collection of nuclear families, typically exogamous and patrilocal, meaning that, as with chimpanzees, females tend to marry outside the band and males tend to remain with their fathers, brothers, and cousins. This band — or perhaps, “gang” — is the default social order for humans, and the exogamous arrangement with women increases genetic diversity, encourages intergroup contact and trade, and even allows groups of men to resolve intergroup conflicts by simply trading women.

Band-level societies are also fairly egalitarian, and do a lot of sharing. Fukuyama adds that, “many of the moral rules in this type of society are not directed at individuals who steal each other’s property but rather against those who refuse to share food or other necessities.”

Leadership in this kind of society is not inherited — it is earned both through a combination of demonstrating strength, earning trust, and building a coalition of supporters. You can strong-arm a small group for a while, but sooner or later, someone’s gonna cut you down. A betrayal of trust or a stronger contender can elevate a new “alpha,” or “big man,” so decision-making in a band-level society tends to be consensus-based.

The natural tendency to return to band-level thinking is the basis for the phenomenon Fukuyama calls “patrimonialism,” defined as the preference for one’s kin or “friends.” The human tendency toward patrimonialism is fundamental to Fukuyama’s theory of political order, because he pits it against the kinds of systems that are purely meritocratic or impersonal, as modern states say they attempt to be. In a patrimonial society, “we” are more equal than “them,” and this results in the accumulation of wealth and power into fewer hands, as well as all sorts of favoritism and unearned privileges. In a modern state that is functioning more or less as it’s supposed to, everyone has to play by the same rules.

The majority of The Origins of Political Order is devoted to exploring the complicated ways in which elements of modern states developed to check patrimonialism, and how those checks can decay as circumstances change. As I mentioned, he covers a lot of ground — too much to cover here — so I’ll simply recommend the book and focus on a relevant point.

Fukuyama doesn’t say it in so many words, but modern, socially constructed identity groups seem able to replace kin-based groups in terms of inspiring this kind of favoritism. A member of the “party” or “union” or “community” is preferred over a pure outsider. Ideology has many features of religion, and religion is one of the factors that Fukuyama believes separates the tribal society from the band-level society. Religion and ideology create a broader understanding of family — of who is “us” and who is “them.”

In the final pages of The Origins of Political Order, Fukuyama concludes that the doctrine of universal recognition makes liberal democracies attractive because it is a throwback to the shared participation and shared decision-making common to early tribal and band-level societies. “Once the principle of equal respect or dignity is articulated,” he writes, “it is hard to prevent human beings from demanding it for themselves.”

However, he follows this evident truth by stating that, “successful liberal democracy requires both a state that is strong, unified, and able to enforce laws on its own territory, and a society that is strong and cohesive and able to impose accountability on the state.” This also seems reasonably true, but the idea of a “cohesive” society conflicts with the “diversity is strength” mantras of First World governments, global corporations, and globalist organizations like the United Nations. The cohesive societies with shared backgrounds, religious beliefs, and values that created liberal democracies have in recent history been consistently undermined by attempts by elites to import and integrate foreign groups and ideologies into their states — Muslims in Europe being a particularly corrosive example.

The promise of “intratribal” egalitarianism to everyone everywhere, and anyone anywhere, has in practice created opportunities for the development of what Fukuyama would have to characterize as the kinds of interest groups that engage in zero-sum rent-seeking.

In America, the triumph of this doctrine of absolute inclusiveness has created a social environment in which identity groups actually end up vilifying any kind of overall cohesiveness, homogeneity or social order. Instead of promoting a cohesive society that mobilizes to check the power of the state, Americans have broken themselves out into racial and sexual identity groups — including the 51% minority group known as “women” — that are increasingly focused on using power to secure rents, privileges, “affirmative actions,” hard quotas, soft quotas, special protections, and impunities from both the state and private businesses. And while — unlike [4] in Europe [5] — freedoms of speech and press remain more or less intact in the US, these racial and sexual identity groups are successfully using social media, traditional media, predatory legal challenges, and economic leverage (by harassing companies who hire even the most benign, milquetoast dissenters and questioners) to silence any discussion or criticism of their ideas or collective behaviors.

These social actors, along with the trade unions, business groups, student organizations, nongovernmental organizations and religious organizations that Fukuyama identifies, have created an increasingly stagnant, inflexible system that is failing to respond efficiently or effectively to new challenges. While he sees much to like about liberal democracy, he admits that, “If the institution fails to adapt, the society will face crisis or collapse, and may be forced to adopt another one. This is no less true of a liberal democracy than of a nondemocratic political system.”

Fukuyama doesn’t directly address the problem of social fragmentation in his conclusion to The Origins of Political Order, but it if a cohesive, mobilized society is required to impose accountability on the state, then it seems to follow that a fragmented society of rent and privilege-seeking special interest groups will be unable to impose that accountability effectively — and Americans will be left with a powerful, authoritarian bureaucracy accountable only to interest groups and the wealthy stakeholders who fund them.

Every so often I see this smug little infographic [6] about the superiority of public education in Nordic countries, and the failings of the American system. In the early chapters of The Origins of Political Order, Fukuyama calls the problem of modern state-building “getting to Denmark,” because, “for people in developed countries, ‘Denmark’ is a mythical place that is known to have good political and economic institutions: it is stable, democratic, peaceful, prosperous, inclusive, and has extremely low levels of political corruption.”

In addition to the unique factors Fukuyama identifies that made the development of European states possible, it also seems likely that the relative size and homogenous composition of these nations contributed to their mythical perfection. Denmark is less than one quarter of the size of the state of Oregon where I live, and Fukuyama points out early in the book that even the American Founding Fathers were aware that classical republicanism “did not scale well.” The democratic ideals of early Greece and Rome were developed by homogenous societies. In the case of Rome, expansion and growth eventually gave way to Caesarism, and the Greek city-states were eventually conquered by monarchies.

Part of the magic of Denmark is that it is small, and it was created by the Danes, for the Danes. Danish magic may only last as long as those things remain true, and there is clearly trouble in Denmark. Over half of the convicted rapists in Denmark are immigrants from Iran, Iraq, Turkey, or Somalia [7]. Many Danes are concerned [8] that their culture is being subverted by Muslim influence. Danish birth rates are so low (1.7) that the government recently sponsored a “Do it for Denmark [9]” ad campaign. Denmark without Danish culture and the Danish people will not be the Denmark that everyone else in the West is “trying to get to,” and it seems likely that their political order will decay.