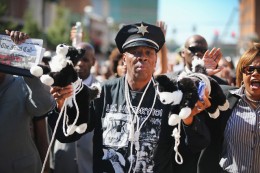 I’m not the biggest fan of the whole “dark enlightenment” “game” crowd, but I admit they are correct when it comes to sexual dynamics, female behavior, etc. (my basic problem with them is one of prescription, not description). Some useful analogies can extend to the race situation.

According to the gamesters, women love alpha males and absolutely despise beta males, for whom they have contempt and who they mercilessly exploit (when they’re not ignoring them). Alpha males are cocky and confident, know what they want and take it, don’t care what others think of them, and have borderline sociopathic traits. Beta males are “try-hard” nice guys, comfortable providers, the doormats of society.

It is clear that the once-alpha White race is now hardcore beta: weak, wishy-washy, starry-eyed nice guys, doormat supplicants, a subaltern race, groveling toward aggressive coloreds (and the sexual consequences [2] of this are not hard to discern). Whites are held in contempt by coloreds, who exploit the pitifully beta White race. Another “game” concept is the “shit test” — obnoxious female behavior aimed at evaluating and probing the relative alpha-beta characteristics of the targeted male. Woe betide the beta male who fails the test! Isn’t much world-wide colored behavior a series of massive “shit tests” towards Whites? Illegal immigration? Race-targeted crime? Racial preferences? Double standards? Accusations of “White Privilege” while it is clearly the coloreds who are privileged? What is the upcoming executive amnesty but a large, in-your-face “shit test” aimed at White America, White voters, and the “old White men” of the GOP? And, truth be told, Whites fail these “shit tests” each and every time. Racial bullying during the 2011 race riots in England

Another analogy is that of schoolyard bullying — where the low character bully targets a victim based on the knowledge that the victim won’t fight back. The victim runs away (White flight), appeases the billy, allows himself to be beaten and humiliated, etc. This would end only when the victim stands up to the bully, when the victim defends himself.

The racial analogy is apparent. Whites worldwide have been bullied for decades, Whites absolutely refuse to stand up for themselves, refuse to fight back, and so invite more bullying.

Indeed, the proper image of the White race is that of a cowering beta male, shit-tested and exploited by brassy sluts, and bullied by dull-witted lumbering oafs.

What advice would you give such a man?

That advice is what the White race as a whole needs to do.