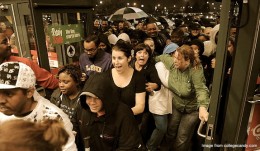 [1]Everybody knows the old joke:

Man: Would you consider sleeping with me for a million dollars?
Woman: Well . . . I guess so.
Man: How about ten dollars?
Woman [angrily]: Do you think I’m a whore?
Man: Yes, we’re just haggling over the price.

This came to my mind when I saw coverage and comment on the usual Black Friday frenzy, which has now spread to the UK [2] and other outposts of the Western Liberal Empire, with the usual unsightly mob scenes and equally unsightly sneering and social signalling by those who are ostentatiously NOT involved in the rugby scrum bargain hunting – although I wonder how many of the disdainers are secretly playing both sides of the field by slipping in somewhere to buy something cheap. (Or shopping the online sales in another browser tab.)

But unless you are living in a barrel like the philosopher Diogenes or perched on a pillar like St. Simeon Stylites, criticizing events like Black Friday will always have a touch of “just haggling over the price” of one’s whoredom. People like stuff, I like stuff and you like stuff, and that is not going to go away, and if it’s cheaper all the better, and unscrupulous merchants can use these basic drives to create occasional consumerist surges that will, given the ugly diversity of our societies, descend into animalistic melees from time to time – but then surely that is the whole point.

This is yet another one of those videos, like “10 Hours of Walking in NYC as a Woman,” that is designed to shine a light on the bestiality of men, while providing people on social  media with an opportunity to shoot off various signals about (a) how wonderfully moralistic they are, (b) how wonderfully amoralistic they are, (c) how married they are, (d) how picky they are – “She’s not good-looking” or (e) how smart they are – “She must be a feminist with AIDS” or “It’s obviously a set up” (although this latter example has the slight negative of implying random women are not strongly attracted to one).

So what is actually going on here with events like Black Friday and these increasingly prominent viral vids?

There seem to be a couple of things. First there is an increase in narcissism and navel gazing, a focus on the obvious, and an obsession with the banal. Partly this is the result of technology, which allows us to document and comment on everything around us without much moral oversight. Never in human history has mankind been so technically enabled to stick its head so far up its own arse. But it is not just technology. There is also the deep, spiritual vacuum that Western man has fallen into, the result of modernity and existing for a thousand years on an ill-fitting moral system imported from the Middle East.

Previous generations were just as well aware of the more brutish aspects of human nature – see Juvenal, Plutarch, Marcus Aurelius’s Meditations, or even Christian concepts like the Seven Deadly Sins. In the past there was always plenty of censoriousness, but the signalling was much more muted than it is now and something that was itself regarded as a sin – at least until the turbo-charged sanctimony of the Puritans came along.

Also, much greater emphasis was placed on simply transcending our brute natures through stoicism and heroism, something that the modern age is incapable of, especially since a symbiotic relationship has now developed between these brutish and censorious aspects of our humanity. Our brute nature needs to be constantly in the foreground so that we can publicly flog it and use it to create a panoply of attractive social signals for our coteries, both online and off.

Look at those consumerist morons, stampeding each other for a few bucks off a stereo. Yes, but what about the equally disgusting – and financially less beneficial – stampedes for social validation and a few Facebook thumbs?