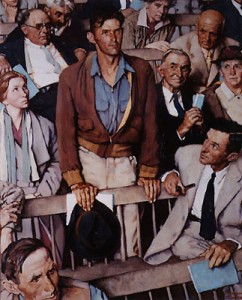 A Time to Complain

There are two basic things we need to do: we need to build a new society based upon a new movement (the theme of my Western Destiny [2] blog), while, at the same time, undermining the System, which includes undermining the “movement” — which is actually part of that System (an inept bogeyman, playing a role similar to that of Emmanuel Goldstein in Nineteen Eighty-Four). Today, I have a few words about undermining the System as a whole, built as it is on the ideology of multiculturalism. I would like to talk about “democratic multiculturalism,” a concept endorsed by Frank Salter and Ricardo Duchesne, and one that I have previously discussed here [3]. Why do people who believe that “the only thing worse for the majority than a multiculturalism that does not work is a multiculturalism that does work” want to promote so-called “democratic multiculturalism?” This paradox should become clear with some further explanation.

Whites need to demand a seat at the multicultural table, represented by real advocates of White interests, not groveling patsies. Given that “Western” multiculturalism is defined by majority passivity and atomization contrasted to collectivist minority mobilization, a more collectivist and mobilized majority will go a long way to undermining the foundations of the System.

How to best begin this process on the group level is something that needs to be determined. We will need Rightist elites to stand up and follow the lead of Salter and Duchesne. They need not be hypocritical or even deceptive about this, but essentially state: “It is well known that I do not approve of multiculturalism, a destructive ideology bad for my people, my culture, my nation. However, that is the dominant system we currently have and my people and my culture need to be represented within it.”

Most readers here are not, and never will be, part of that elite, but something that can be done at the individual level is to engage in some sociopolitical ju-jitsu against multiculturalism yourself. Think of this as the “bottom-up” component of the strategy, in contrast to the “top-down” approach described above. When the opportunity arises, one can assert that Whites need to be included and given a legitimate seat at the multicultural table. However, one must present the proper ticket of admission: victimization. Complain about discrimination whenever you have a legitimate case (in today’s society, you should have no shortage of opportunities). The complaints should be couched in the language of multiculturalism, but explicitly aimed at targeting discrimination on a racial (anti-White), ethnic (anti-[fill in name of White ethnic group]), gender (anti-male), sexual orientation (anti-heterosexual), religious (anti-Christian, if you are a believer or even if you are not), etc. basis – with those guilty of discriminating being “others” (e.g., coloreds, liberals, feminists, Jews, Muslims, “gay” activists, System apparatchiks, etc.).

We need to get over the idea that such complaining is “weak, beta, non-White, feminine” blah blah blah. Not only is this complaining being done for a specific political purpose, but note that in a multicultural milieu, power is in part derived from the role of “victim.” Yes, it is a “Last Man” attitude, but it is a means to an end, it is the case of Higher Men being able to stomach their sense of disgust (self-mastery, no?) to use the ressentiment of the Last Men against them.

Remember, this is a means to an end, not an end to itself. It is not mainstreaming, it is not compromise, it is not incremental progress, and it is not reforming the System. It is instead using the contradictions and weaknesses of the System against itself; it is an approach which forces the System to take its own ideology at face value, or be forced to declare its illegitimacy to the majority of the population.

Certainly, at least in the beginning, these complaints of anti-White, anti-male, anti-heterosexual discrimination will be met with derision, disbelief, snarky ridicule, sarcasm, hysterical responses, heavy breathing about “White Privilege,” and, perhaps, the claim that majority assertions of discrimination are themselves signs that the complainers are the bigots. This is where the men are separated from the boys, so to speak, where self-mastery comes in: you must ignore these responses, persevere, and push through the barrier.

If the System is going to ignore or ridicule your legitimate complaints, you need to push them into a corner in which they have to openly admit that discrimination against straight White men (Sailer’s “war against Whites”) is acceptable to them; they must be forced to admit that, to them, Whites have no rights; they must be forced to admit that “inclusion” excludes Whites; they need to admit that multiculturalism is for non-Whites only. The System depends on all of this being implicitly understood by Whites without it ever getting to the level of being explicit (although some former government officials have openly stated that “civil rights laws do not apply to [male] Whites”).

The System loves the status quo; they want multiculturalism do work smoothly. They want the low-caste subaltern Whites to quietly accept their lowly status without complaint, without forcing the System to crudely reveal its agenda. Don’t let them off easy. If they want to exclude Whites, then the exclusion needs to be open and overt, as a slap in the face to the complacent White masses. Therefore, if you have a legitimate complaint, go for it.

After all – and this is crucially important – our complaints of discrimination, as opposed to those of the Others, have the added power of actually being true (note my caveat above: make sure your complaints are based on some sort of legitimate issue). This is an “the emperor has no clothes” situation – some Whites do know what the score is, but each alone is afraid of saying anything. In a multicultural regime, complaining about discrimination is a socially acceptable means of protest. In theory, socially acceptable for everyone; in practice, not acceptable for White men.

But, following the implicit/explicit argument I made above — it is “not acceptable” only in an implicit sense. Implicit attitudes are the downfall of a White race unable to articulate or defend its racial interests. Implicit Whiteness. The acceptance of an implicit lower-caste status for Whites. An implicit understanding that White men are “not allowed” to complain about race/sex/ethnic animus directed toward them. This implicit bluff needs to be called.

If multiculturalism makes whining victimology socially acceptable, then the real victims of multiculturalism have to force the issue. If a few Whites so complain, that might embolden others to follow suit. With sufficient White complaints, that seat on the multicultural table just might open up, as the System strives to placate Whites by assimilating them into multiculturalism. At first, they may try and get System agents to pose as White representatives, to defuse the pressure: this must be opposed and such individuals replaced by real advocates.

First steps first. Discriminated against? Complain. Persevere. Use the multiculturalists’ own language of “inclusion” and “fairness” against them. If “White Privilege” comes up, make arguments against it – one can find plenty online. One can slip in subtle “movement” memes at this point; the idea that a people being demographically displaced as a result of official policy are “privileged” is ludicrous, as one example. Keep on pushing, but within the System framework. Use common sense; become familiar with the vernacular of victimology. Play the game well. The System is based upon a house of cards and they know it. You should know it too.

Success here is predicated on the assumption that “breaking the ice” will embolden other Whites to speak up as well. Of course, this assumption may be wrong, given the pitiful passivity of the subaltern White race. But one never knows, one must try. If you wait for the “beer and football crowd” to be the first ones to voice their simmering complaints and resentment you will be waiting forever.

One concern at this point would be that this essay, along with the statements of Salter and Duchesne, will lead the Others to conclude that the demand for a seat at the multicultural table is for the purpose of undermining their multicultural project, leading to a refusal of that demand. After all, you can argue that these folks can simply point to essays such as this one that openly state what the strategy is. That is true. But it is irrelevant. One should not deny the obvious. One can say:

It’s true. I don’t like multiculturalism. I want to see it end. I have an overt pro-White agenda. Others who are demanding a “seat at the table” share these views. But that is not relevant. The multicultural system exists, it is YOUR system, and any system that disenfranchises that majority of the population will be viewed as illegitimate by that majority. This being YOUR system, it is up to YOU to find a way to include Whites and LEGITIMATE White interests (defined by us, not by you) in multiculturalism. If you believe multiculturalism can work, it is up to YOU to show it can work for everyone. Inclusion cannot be exclusive, as much as you would like it to be, as much as you have practiced it as such for decades. Whites are no longer going to be passive while others are mobilized.

This of course, once again, depends upon other Whites doing their part – Rightist elites applying pressure from above, and a fraction of the White masses applying pressure from below. Obviously, if they fail to do so, there will be no incentive to the System to compromise (note: they compromise, not us) in the manner described here. The “top” and “bottom” pressure must exist, it must be consistent, and it must weaken the legitimacy of the multiculturalist regime. The System may realize that including Whites in that regime may have the same long-term result that “glasnost” had for the USSR – but, like Gorbachev, they must feel like that have no choice but to take the chance on reform.

Another concern is that the System will attempt to co-opt White multiculturalist involvement by promoting compliant anti-White White traitors to positions of representing Whites. We must absolutely refuse to let the System dictate the terms of our own participation. Only those who represent the interests of Whites, defined by those Whites who have historically been defending and prompting White interests in an explicitly racial manner, will be acceptable. Puppets will be rejected.

This is a long, hard road, and there will be additional objections, problems, and criticisms, but here at least is a broad statement in favor of “democratic multiculturalism” and an outline of sorts of what should be done.

Start complaining! Do your best imitation of an aggrieved member of the Tribe, or some whining colored activist. It may be hard at first, and out of character, but remember, it’s for a good cause. Disruption, chaos, heightening the contradictions. Probe the System to expose the anti-White animus of multiculturalism. It’s win-win. If they refuse that seat at the table, use that refusal to expose the animus and the hypocrisy; if they allow the seat, then undermine the very essence of multiculturalism by forcing majority interests to be accepted as a legitimate topic of discussion and policy objective. Above all else, shake up the status quo. Chaos, chaos, and more chaos.