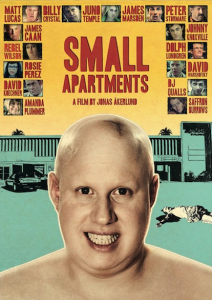 At first glance Small Apartments — the novel turned screenplay for the movie by the same name — is the usual pop culture fluff that generates only minor interest from the avid, serious reader. But a second look reveals much more.

Millis has produced a work that is genuinely entertaining and also quite telling in regard to today’s post-America America, with bizarre situations and characters perforating on the edges of unconventional adventure. It’s weird. It’s funny. And it goes in different directions complete with unpredictable outcomes. Some will see the story as it is–an unusual work for sheer pleasure. Others may have a different view, where we can accept its humor on the surface and then delve a little deeper for personal reflection.

The central figure is Franklin Franklin, a bumpkin who kills his landlord and suddenly finds himself in the precarious situation of having to dispose of the body. Franklin is a modern day recluse, living (sort of) in dumpy, motel-like apartment complex, with nearby tenants who generally despise him. He is a grown man who spends his day talking to a dog, saving fingernails, playing an obnoxious alpenhorn, taking fantasy-inspired bubble baths, collecting plastic soda pop bottles and leaving them strewn throughout his disgustingly untidy apartment, listening to motivational cassette tapes from his psychotic brother, leering at a mother-daughter exhibitionist team across a barren courtyard, and dreaming of a life with big-breasted blondes, green meadows, “majestic condors,” and folksy mimicry in some pristine, Swiss valley. A life that isn’t really a life at all. A life of man-boy dreams.

Franklin is a character intentionally lost in his own world, a weak person who has no idea how to attain what he wants. It’s something he knows but just can’t achieve. He can’t approach reality, so instead he chooses to withdraw into his apartment, shutting himself off as much as possible from those around him. His chosen form of entertainment is perpetual escapism, a safety zone that only he understands. He is almost afraid of everything and everyone around him, and has an incredibly difficult time even making small talk. This is actually what makes Franklin so real, despite his idiotic childishness. The author does a good job developing the protagonist, giving the reader pieces of a person that can only lead to an unhappy state, crashing towards maximum failure and a pointless life.

But, of course, it’s all for a laugh.

His brother Bernard is just the opposite. He doesn’t dream at all, and instead has the personality and motivation that Franklin desperately wants. Bernard emits strength, he knows how to relax, and more importantly, he gets the girls. Easily. He tries to motivate Franklin to change, to adapt to a new life of independence and manliness. To do something worthwhile. He even advises Franklin on the opposite sex and tries to show him the technique, using his own set of rules and protocol to lure in the bait:

Bernard brought home a parade of girlfriends. He would usually take them  bowling on a first date. Bernard carried a 160 average, but he would sandbag for the girls. Bernard did not put on airs. He did not care what impressed a woman. “Take them bowling,” Bernard would say. “That’s how you flush out the tight-asses. Uptight chicks refuse to bowl. And if they won’t bowl, they won’t roll. If you know what I mean.”

However, these are merely flashbacks from his past life, as Bernard is unavailable to render any real help because he is hospitalized in a mental institution throughout the story. Thus Franklin is left to his own strange devices in order to get things done — such as removing the dead body from his filthy kitchen with the most unusual means imaginable. This is the ultimate dilemma he faces and the essence of the novel’s plot, which takes place in the fundamentally transformed city of Buffalo, New York.

And like a lot of people living in Buffalo, he barely manages to eke out a living, existing in a tiny room with a cast of losers floating in and out of the story. They include a foul-mouthed retiree, a Christian mother (of course, as no other religion is to be made fun of) who is a recovering alcoholic with the vocabulary of someone from a 1930s Baptist revival, and her pothead son Tommy Balls. Tommy is usually wasted (naturally), a store clerk who “budgeted for two things in his life: rent and weed.”

Part of Franklin’s problem is his image and lack of, well, common knowledge of how anything works. He’s out of shape. He’s socially inept. He can’t fix anything. He can’t drive a manual five-speed. He doesn’t stick up for himself. He is easily pushed around. He cringes when spoken to. He daydreams. He has no real skills for a real job. He screeches like a small girl when something frightens him. He’s basically useless, taking up space and consuming junk food.

Remind you of anyone?

In many respects the main character represents the devolution of today’s white male. I’m sure there’s no hidden message from the author, or parallel premise that lies between the pages, but it’s obvious to those of us who view this kind of stuff in a different light. Franklin is a metaphor for who and what we have become. OK, I know. This is humor. On the surface that’s all it is, and maybe it’s a little over the top to make it into something else. We get it. We know. And sure, we can go back in the years and see similar comedy routines in Jerry Lewis or The Three Stooges. But they were laughed at because they weren’t real. They were entertainers who got yucks from a make-believe set because it was outrageous. Franklin Franklin is not an exception anymore. He’s the guy waddling down aisle three looking for the creamy marshmallow topping. Or the obese dude working his flabby triceps (why?) when he should be grinding it out on a treadmill in between salads and fruits.

I highly recommend Small Apartments. It’s definitely a worthwhile pick for a quick and off-the-wall read. Millis has a unique writing style that will make readers chuckle and hopefully think about where we are today as a people. The novel is brought to the screen by Jonas Åkerlund, and includes a lot of the hilarious spots from the story.

So check it out, and next time you go cruising down the street, take a look around. We are Franklin Franklin.