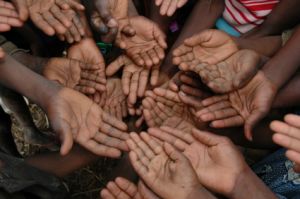 Can we stop pretending yet? Can we please just stop with this sick farce of Constitutions, and Dreams, and Exceptionalisms and all the rest of it?

At this point, what is the point of all this?

Barack Obama just abolished immigration law by granting amnesty to an estimated five million illegal immigrants. All of the children of these illegal immigrants will be citizens. He did this unilaterally and illegally. We know it was illegal because he told us so on multiple occasions over the last few years [2].

If the rule of law, the principle of sovereignty, and even the distinction between foreigner and citizen is to be abolished, why do we have this government to begin with? It seems incredible that this massive apparatus commanding vast intelligence agencies, terrifying military and paramilitary forces, and nightmarish weapons capable of destroying the world ten times over is simply giving up.

History tells us that revolutions occur when the ruling class loses faith in its right to lead. To the more conservative among us, it might seem like this is precisely what is happening. An exhausted white ruling class is simply giving in to demographic reality. As Bill O’Reilly noted after Barack Obama’s re-election, the “white establishment is now the minority [3].”

Yet there’s something deeper underneath all this. Contra the predictions of imminent collapse, the federal government is now reporting record tax revenues [4] and our expanding federal deficit means little as long as the dollar is secure as the world’s reserve currency [5]. Some believe that other powers are rising to counter American influence, particularly Russia. Yet the entire Russian stock market is worth less than Apple (as are Singapore and Italy [6]). And the United States has overtaken Saudi Arabia and is now the biggest oil producer in the world [7]. Put simply, the pax Americana continues and Bismarck is proven correct – “There is a special providence for drunkards, fools, and the United States of America.”

The terrible truth is that the decision to essentially hand over the country to a foreign population is being done from a position of strength. The ruling powers of the country have made the conscious decision that they can tighten their control by electing a new people. The new Third World “American” population will be willing to accept lower living standards and the transfer or resources from labor to capital. At the same time, the multicultural Left is far more concerned about attacking European-Americans [8] and transferring their wealth to nonwhites than seriously confronting structural inequality. Socialism has been replaced by racial socialism [9] and both “Right” and “Left” are aligned against the remnants of Middle America.

Dana Milbank (a man, evidently) in a column giggling about the “tired blood” of white Americans, wrote [10] that the United States is undergoing a “rapid decoupling of race and nationality.” Such racial mysticism is quite acceptable when it is used as a weapon against whites. But Milbank is slightly off — the United States is actually undergoing a rapid decoupling of nation and state.

As Carl Schmitt taught, the “friend-enemy” distinction is critical to understanding the structure of politics and the purpose of the state. After the age of nationalism, a state was held to be the political expression of a particular people, with citizens who belonged to both the state and the nation (the ethnic community) being the pillar of each state.

This is usually compromised, as there are usually many citizens of the state who aren’t members of the ethnic community. Nonetheless, each state has a “core” population that gives its character to the state. For the United States, it is the White Anglo-Saxon Protestant founding population that answered Samuel Huntington’s question, Who Are We?, with the larger European population assimilating into this basic type.

Obama’s amnesty represents something rarely seen – a formal acknowledgement that the “state” is turning against the “nation.” The core European-American population – what Peter Brimelow of VDARE calls the “historic American nation” – is disposable. Indeed, in the eyes of our rulers, both Republican and Democrat, it is a liability. And as Jack Donovan has said, it makes sense, from their perspective [11].

Therefore, any critique premised upon this being American leaders being “stupid” is misguided. Even the eventual loss of American territory – a real possibility [12] someday, if not anytime soon – doesn’t really represent a “loss” to our leaders. Indeed, it is actually a benefit, a development that paves away for the eventual European Union-style economic and political integration of the North American continent. As Sam Francis spent his career explaining, the current leadership of the United States has no real stake in the continued existence of the American national community.

So why bother waving a flag or being loyal to a “nation?” It seems self-evident that European-Americans should turn on those who have betrayed them, renounce the failed American experiment, and secure their own destroy by any means necessary – secession, rebellion, and the eventual goal of the White Republic. Unfortunately, it’s not that simple.

The very beneficiaries of the government’s largesse are those who are most eager to destroy the symbols of the state. We are in an ironic position where the government subsidizes and rewards those who burn its flag [13] and attack its law enforcement officers [14].

Meanwhile, European-Americans who are consistently betrayed and sabotaged by own government are still eager to leap to the defense of the symbols of the Old Republic and lay down their lives to fight her perceived enemies.

Nor is this simply European-Americans being foolish or stupid. One is reminded of Commander George Lincoln Rockwell [15], a man who openly paraded under the swastika of German National Socialism, saving an American flag from being destroyed at the hands of a Vietnam War protester. Even those who should know better (including me) find themselves moved by the symbols and songs of national institutions [16] that we know full well are being used against our people.

This takes the form of a curious doublethink. If a right-minded friend wears an upside-down American flag or even burns the federal banner, I’ll approve it as a form of outraged protest and response to betrayal. If I see pro-immigration protesters burning the flag and cursing out the United States, I’m probably getting in a fight and going to jail to try to save that bit of cloth. I fully recognize the absurdity of this. It changes nothing.

It’s all very well to write a critique snarking about some “Tea Party patriot” in Murietta, CA waving the flag of the United States Army to protest the decisions of the government those soldiers are defending. But even though it makes no logical sense, the actions of misguided paleo-Americans still somehow rings true.

The United States of America still belongs to European-Americans in some primal way that can never be transferred via a piece of paper. The flag is still ours in some way that can’t be touched by anyone else. And this remains true even though the rot was present at the beginning of the American experiment and it’s hard to see how America could have ended up any other way.

If European-Americans can’t break away from this totemic fixation on the United States, they will not long survive. White survival on this continent depends upon the historic American nation recognizing that it is a European population and but a branch of a greater Western family [17]. The pathetic fear of American conservatives that “we will end up like a European nation” [18] and must remain a New Jerusalem is what has led us to this point.

But this will be far easier said than done. The psychic hold of the American Dream on our people will not be easily sundered. What is required is an ingathering, a conscious attempt by activists and thinkers to form the core of a self-aware people. Political activity framed explicitly as in the interests of European-Americans will further this ingathering. We have to give our enemies what they want [19] and let their hatred and rage at our collective activity forge our people together in spite of ourselves.

Yet it’s equally true any mass movement of European-Americans will borrow heavily from the iconography and rhetoric of the very regime it is rebelling against. Even the Confederate States of America took as its seal the image of the Father of Our Country, George Washington, the federal government’s first President and an advocate of strong central authority.

Moreover, the breakdown of the United States, which is already unlikely in the short term, won’t necessarily lead to some glorious new dawn for European-American populations. After all, what “ethno-nationalism” could conceivably emerge ex nihilo out of the North American Empire? It seems far more likely that if the United States collapsed tomorrow with whites in their current deracinated state, we would simply end up with miniature versions of the same system that we have today. It might even be worse, as we could simply be citizens of “independent states” that function as colonies of international finance.

Regardless of what metapolitics or theoretical construct is created, European-Americans are now a common people with a common destiny on this continent by virtue of nothing else than that is how they are regarded by their enemies. These enemies now include the very people who govern “their” country. We are but one among the various stakeholders on this continent. We are divided amongst ourselves by region, religion [20], and political orientation, but such differences do not change our common fate.

No progress will be made unless European-Americans become conscious of themselves [21] as Europeans abroad, as a people in their own right, and as possessing a destiny separate from that of the larger Washington, D.C. regime. The actions of the Obama Administration and the accelerating hysteria of the media against European-Americans is actually simplifying our task. Now that it is clear that the Washington regime is willing to do without us, we must be willing to do without it, at least within our own minds.