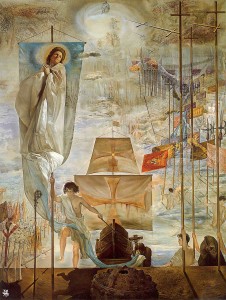 In Latin America, the voices that seek to give a poetic tinge to the past so as to legitimize their chosen future decided to name Columbus Day, October the 12th, Día de la Raza, the “Day of the Race.”

Expressions and meanings are not always univocal, and what in Iberia could be understood as the presence of the same race both on the peninsula and on the other side of the sea, in America came to carry a brand new meaning. Anything could result from the clash of one culture against many, as well as the interaction between two races, but never a race, although political correctness insists constantly on the origin of a new race born from the clash of civilizations. Either that, or a bloody and genocidal invasion.

Every good researcher (who is in league with hard truth and cruel objectivity) should accept history as it is, and try to avoid making retrospective judgments; they are useless and extremely biased.

I will analyze the image below. (Translation: “America was not discovered, it was invaded and looted. There were civilizations in America already!”)

Whether America was actually discovered or not, depends on the eye of the beholder. Probably, those already living in America discovered Europe when white sailors arrived on the shore; in the same way, America was discovered to the world, removing the veil of being beyond the horizon. From the darkness of ignorance, to the light of vision. Other European people visited America before, but none of them showed America to the rest of the world, so there was not a true discovery or a lifting of the veil. Yes, of course, in America there was knowledge, and culture, and all those things the Left always tells us about. But I’m not disputing that.

To call the colonization/settling process an “invasion” is also a matter of perspective. I myself use this expression when I am surrounded by black settlers. When I am the “native,” obviously I will give a negative connotation to the allochthonous.

Looting is typical of humans and, to be more exact, it’s a male thing. Looting and destruction, as symbols of triumph, are older than any weeping Leftist ideology that we could subscribe to at present. Can anyone imagine the disaster of Curalaba [3] without mapuches burning down everything to the ground and destroying every single building of the invader/settler in their path of blood and death? Can anyone imagine the Greeks conquering Troy, and then leaving the city not burning in flames?

Yes, many Conquistadores were hungry for gold, though at that time it was perfectly normal to be hungry for something. Gold, women, conquering, crushing. There (at that time) and here (in this place), where the Spanish Crown and the government did not rule in more than a nominal way, is where libertarianism was born, and the European was able to return to the essence of the forests, back to the days where the only human right was fighting for survival. A land inhabited, but strange, caused reactions that were defensive and often offensive. Outsiders coming in waves caused reactions that were defensive and often offensive. C’est qui a raison nature.

Yes, it is true: there were civilizations in America. There were huge empires, and complex social networks, legal systems, and technological advances. Probably, in America there was even more knowledge of astronomical subjects than in Europe. When the defenders of indigenous peoples, as well as the voices of the Left, claim that America was already civilized before Columbus, they are right. But there is something that should be noted in the pursuit of objectivity and the unadorned truth: civilizations existed in America, and therefore violence, abuse, oppression, slavery, genocide, imperialism, and so many other banes that the academy always tell us belong to the European heritage, never belong to indigenous peoples. America was not always a land of uncivilized savages, but often a land of civilized savages, not so different from Europe in an earlier evolutionary stage.

European actions, often destructive, bloody and cruel, are a reality, but who cares! The history is as it is, not as the Left wants the history to be. “Black Legend,” or “White Legend.” Being more accurate, the process of discovery/visibility, conquest/submission, and settlement/invasion (for everyone) of America resembles more a “Grey Legend,” as it is not the innocent story proclaimed by some, nor the bloody saga portrayed by others.

Ethnic and cultural diversity in America is a fact, and it’s useless to cry over spilt milk (or blood). We are here, we came to stay. We do not deny the past, and if our ancestors did not act very politely, we accept it. We are not so cynical as to vindicate the good without the bad; despite everything, we are heirs of the history as it was, not of things that are “nice” and “pretty.”

We are more aware of the importance of the survival of peoples, and therefore we rebel against the legends that speak of a dreadful past and also a paradisiacal one; but in addition, we rebel against the moral arbiters who have established another myth: that of a melting pot of identities, as if that could lead to the emergence of a new breed, a new race.

We are of European blood, born on American soil. Respect our existence, or expect our resistance.