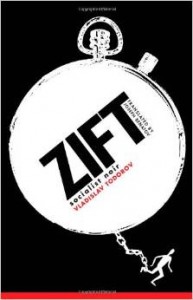 Imagine being shut off from your country and, after some time, cast back in, only to find it unrecognizable. It has become a huge gray void, another world where everything is turned upside down. A new state. A new government with enhanced power to squash individual resolve and reason. The irrational is rational. Purpose is collectively driven. There is no choice. It’s the Revolution. It is unquestioned, and it is not debated, because it has to be right. People and their interests are cheap; no one can rise above the dogma. It is the state, and not the person, that is sacred. And everyone, of course, understands this. Sound familiar?

So welcome to the new paradise, where the “end starts at the very beginning.”

Vladislav Todorov’s Zift is a multi-layered view of a Bulgarian society written as a bizarre, neo-noir novel. The story is extraordinarily surreal and twisted, taking place in Sofia from before the communist takeover in 1944 to the early 1960s. Todorov paints the capital city as a dark, foreboding place after the coup, with unusual characters dancing back and forth between the two different time periods. The backdrop of darkness within the novel works well as a kind of metaphor, satirizing the communist state as an out of control, clownish circus act. Nothing is illuminated. Unhappiness against happiness. Life against death. And man against himself. Dystopia has replaced a more lively, folksy Bulgaria from the past. As the plot moves around, the author skillfully blends the old, familiar ways of days gone by with light, while the new order is continuously shrouded in a murky blackness. On the surface everything may be in place for a reason, but underneath the writer displays a real parody of truth.

The central character is Moth, who is thrown into prison at a young age for a violent crime he did not commit. It is in prison that Moth gets an education from one Van Voorst the Eye, a man with a glass eye and the uncanny ability to spring deep philosophical anecdotes at every turn. The Eye is not only a cellmate and much older mentor, but an ally for him and his best friend. He represents truth and common sense to the young prisoner. Moth even boasts how he “graduated from the University of Van Voorst the Eye” to others, and uses his wise tales as a prescription for a new life soon to emerge. His influence on Moth during and after prison is repeatedly touched on throughout the story.

The Eye warns Moth to be careful after the “cooler,” and that a man’s downfall could be a woman, any woman actually, and that real peace “requires that you sever all ties with people and things outside the cage, especially with women . . . especially with Woman.” It is a warning that Moth reflects on, but also seems to quietly ignore. He yearns for something simple, and his past is replete with hidden desires for the one he loved.

Moth is released early from prison and sets out with “hope in heart and plan in mind.” As he exits the stripey hole, however, he is immediately thrown into mayhem. His former life begins to haunt his every move, as a partner in crime from the past enters the scene and uses the apparatus of the state to aggressively pursue Moth through the shadowy streets of Sofia. He wants something from Moth, and is not going to give up until he gets it. A cast of strange, exaggerated characters greets the protagonist along the way, exposing the seedy underground of a city that seems to have no soul. Everywhere there is decadence, listlessness, and a lack of what once was tradition. The community Moth knew as a boy has vanished.

He finds himself lost in a different world, thrown into various situations that reflect a society changed for the worse. Whether it’s a bath house, clinic, or a bar, Moth feels compelled to keep running from the state. He has to. He can have no peace, no chance to rest from those who use any and all means necessary to complete their objective. While Tordorov uses the power of the state as a show of force with iron-fisted insanity, it is for my own perception merely a set. It’s a stage for the corrupt, a useful setting for the real center of the story — Moth’s race against time, and his encounters with his own misunderstandings while grappling with the knowledge he acquired under the guidance of The Eye. Moth and his personality are the story. The reader will no doubt turn each page in anticipation of what lies ahead as the hero lurches towards his inevitable end.

The work displays striking parallels with the intolerance we experience daily. Real repression, at least in my humble opinion, has always been a trademark of the Left. It is the psychology of fanatics who want to impose social engineering on groups who would otherwise prefer to just be left alone. This Todorov knows this well. The author has a unique perspective of totalitarianism as he is from the country. He understands that much of the facade is merely pretend, as the inhabitants recite passages or “maxims,” but in no way really believe in the virtues of the state — like the liberals who plague our institutions today. It’s just a routine, an act, an understanding that requires you play along or get punished. In the modern world you can lose your livelihood for uttering truths, or simply noticing faults in people or the system. This is what the Left has achieved — frightening people into submission, or else. For me, Zift embodies this theme over and over as Moth struggles to escape the grasp of henchmen in the state Leviathan.

My take is that Zift is great for readers who want a story about personal struggle within the unknown, or who question the extremes of government control versus individual worth. Read it with your own surroundings in mind, always looking towards the sky as it “looks back at you with a barred eye.”

, and is well worth the view.)