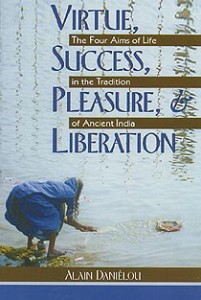 Alain Daniélou
Virtue, Success, Pleasure, and Liberation: The Four Aims of Life in the Tradition of Ancient India [2]

The apostles of multiculturalism are moved less by a genuine desire to “celebrate diversity” than by a hatred for Northern European culture, which is the semi-official, dominant culture of America. Indeed, multiculturalists generally nurture the most naive and simplistic ideas of what a culture is. Their conception of “culture” is fixated at the perceptual level: culture is costume,music, dance, decoration, food. What is essential to culture, however, is a certain Weltanschauung: a view of the world, and of human nature. It is in their response to these world views that multiculturalists reveal their true colors, for they tolerate and permit only those elements of a culture’s world view that do not conflict with liberal ideology.

Out of one side of their mouths, the multiculturalists tell us that one cannot judge a culture, that morality is culturally relative, that cultures are not better or worse, just “different,” and that we must revel in these differences. Thus, the English do not drive on the “wrong” side of the road, merely the left side. But when it’s not a matter of traffic laws, but a matter of severed clitorises, then the other, louder side of the multiculturalists’ mouths open, and they tell us that this sort of thing isn’t just different, it’s evil. In addition to this, one also sees that multiculturalism involves a relentless trivialization of important cultural differences. Thus, college students are encouraged to see religion almost as a matter of “local color.” Isn’t it wonderful that the Indians cook such spicy food, and worship such colorful gods! Isn’t it all terribly charming? They are further encouraged to view religion as a thoroughly irrational affair. Rather than encouraging an appreciation for different faiths, what this produces is a condescending attitude, and resistance to taking the claims of religion seriously when they conflict with the “rational” agenda of modern liberalism.

Indeed, multiculturalism is so anti-cultural that one is tempted to see behind it an even deeper, more sinister agenda. Perhaps the whole idea is to deliberately gut the world’s cultures, reducing their differences to matters of dress and cuisine, and to replace those earthborn guts with a plastic, Naugahyde culture of secularism, scientism, and egalitarianism. Why? Because real, significant cultural differences make it very hard for our corporations to do business overseas and to sell their wares. Solution: homogenization masquerading as “celebration of diversity.” The multiculturalists are right when they declare that de facto, the United States is a multicultural society. But there has never been a multicultural society in the history of the world in which there was not one dominant culture which provided a framework allowing the others to co-exist. To the multiculturalist, the unacknowledged framework is modern liberalism. I will assume that I do not have to rehearse for my readers the many arguments for why modern liberalism is untenable as a long-term societal framework.Where should we look, then, for a framework for a multicultural society? Why not look to the Indian caste system? It was the caste system that allowed Aryan and non-Aryan to co-exist peacefully in India for centuries.

The liberals will immediately object that the caste system is oppressive and unjust. In Virtue, Success, Pleasure, and Liberation, however, Alain Daniélou argues that the caste system is actually a supremely just and peaceful arrangement. It is just because it is built on a recognition of real human difference; a “celebration of diversity,” if you will. Aristotle held that justice is treating equals equally, and unequals unequally. If people are not the same, then it is a mistake to treat them as if they are. The caste system is built on the idea that some human beings are born to work, others to fight and lead, and others to pray. The caste system gives to each human being a place, a community, a code of ethics, and a sense of identity and pride. Daniélou points out that although the system involves hierarchy, each level of the hierarchy is regarded as intrinsically valuable and as essential. Each plays a role that is regarded as important and indispensable. Thus, it is the caste system which truly affirms that different groups are merely different, not better or worse.

Is Daniélou whitewashing the caste system? Consider the words he quotes from the Mahabharata: “There is no superior caste. The Universe is the work of the Immense Being. The beings created by him were only divided into castes according to their aptitude.” But what of individuals born to the wrong caste? For example, what of a child born to the merchant class who shows aptitude to be a priest or scholar? Such things happen. Daniélou tells us that exceptional individuals are allowed to live “outside” the caste system, and are accepted as valuable members of the society as a whole. Modern society is structured on the premise that everyone is exceptional and can make up his mind what he wants to do. Given that sort of freedom, most people get lost — as witness the modern phenomenon of the “slacker,” or the flotsam and jetsam going in and out of psychiatrists’ offices every day.

Despite what I have said, this book is not a treatise on the caste system, but on the four things that all human lives must possess or achieve in order to be complete. In discussing virtue, success, pleasure, and liberation, Daniélou quotes extensively from ancient Indian texts, offering us an abundance of excellent advice about how to understand life and to live well. Indeed, this is really a book about how to lead a truly human life. Daniélou places the four aims in a cosmic context, showing how the same fourfold division is present in all levels of reality. It is present, of course, in the four castes (worker/artisan, producer/merchant, warrior/aristocrat, priest/scholar), and in the four stages of biological development (childhood, youth, maturity, old age), the four seasons, the four elements, the four races of humanity (black, yellow, red, white), the cycle of ages (yugas), the four bodily functions (digestion, assimilation, circulation, excretion), and the four points of the compass (in this order, significantly: south, east, west, north).