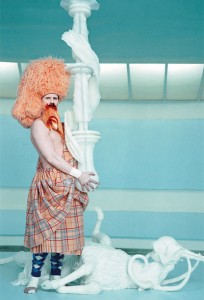 Vaseline at the Guggenheim

Oh, where’s the likes of Oscar Wilde
To denigrate that evil child
Who climbs about? He doesn’t spare us
When greasing up his open areas.

Of all things I might choose to see
It’s not his anus — it’s not he!
It’s gone too far, a sickening
And monstrous thing is quickening,
And Guggenheim in Vaseline
Has greatly worked upon my spleen —
I view a strange group, solely bent
On giving idiocy its vent.

And then to freeze the lubricant!
The only reason for this stunt
Could be much-touted Gug is centered
On achieving ease when entered?

One dirty joke, and it’s because
That none remember what once was
Or hope for what could be. In sum,
We’ve dumbed down to the numbest dumb
Who hang around the Guggenheim.
I’d like to, at some future time
Contribute to a cause that would
Exchange the slippery for the good;

Perhaps expunge that Vaseline
With matches, and some gasoline.

What’s art today? How can we not define
What isn’t art, and then take off from there?
Applying paint, the drawing of a line
Are too direct for some. The honest stare
Of an observer, someone with the spine
And vision to see clearly, and compare
What used to be, before they took a mine
And buried it in sand. And now, we bear
The burden of a faint, incessant whine,
With no imagination left to spare
And nothing good to build on. We resign
Ourselves, each one, to black this sad affair
While looking for some distant outward sign
That comes when least expected, true and fair.

For those that find art in a stain,
For fools and charlatans, whose gain
Gives each true artist grief and pain,
From arty nonsense that some think
Across the centuries can link
Their efforts to join the parade.

For every great creative shade
From out the past, who soon would smash
The silly stuff to muck and ash,
So must we, too, within our time
Redeem our art from formless slime
And put it back on track again.

On Meeting Bill Littlefield at The Cedar Bar

(A popular artist’s hangout during the heyday of
Abstract Expressionist painting.)

It’s rare when someone chooses not to fan
The flames of bloody slashing jungle law.
Within this bar, raw power put a ban
On kindness. Rules were hidden, yet we saw
Your football sweater, nineteen thirteen. Light
Haloed your mustache and thick silver hair
While you bought beers for us that long-gone night,
Critics, reviewers deemed who they would spare,

Perhaps reward, who they raised up or trashed,
To make the competition less by one.
We walked on eggshells while great egos clashed,
Lost all their footing, and were crushed, undone.
You gestured with your cigarette holder to
One who had been predestined for some fame,
Told us of what they’d done, because a few
Had promised a boost up the ladder. Game
But naïve children wanting to make art,
We thought the path to art was true and straight.
An artist, you read every eager heart
And filled us in, explained our likely fate.

Prospects were cold, and we were shivering, too —
Sensed which ones smelled fresh game, and planned a kill.
You rushed to rescue us with what you knew —
Warned of deceit. You offered friendship, Bill.