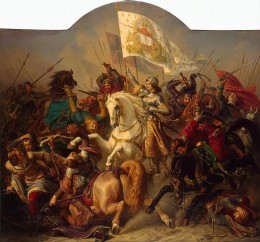 The perennial debate between White Nationalist “vanguardists” and “mainstreamers” is raging again at Alternative Right [4] and The Daily Stormer. I think the discussion would be clarified by introducing a third category: “vantardism,” which is a combination of “vanguard” and “retard” and refers to stupid, counter-productive forms of vanguardism — a vanguardism that holds us back rather than leads us forward.

Vanguardism comes from the word “vanguard” (French avant-garde), which refers to the leading edge of a military formation. In White Nationalist terms, vanguardism is the commitment to lead our people to a White Nationalist society, to pull the political mainstream in our direction. It requires both metapolitics and straightforward politics: changing how people think and changing the political leadership of society.

For me, there are four political absolutes:

That is a rather short list of non-negotiable political absolutes. But if our race is to survive, we cannot abandon these principles, so we will just have to win our people over to them.

In terms of political platforms and propaganda, principle 1, the racial component of European identity, and principle 3, the necessity of resettling non-whites to create white homelands, are the most essential. The constant message should be: “We [English or Finns or French] are losing our homelands to non-white invaders, and we must send them back.”

Neither the threat of global white extinction nor the Jewish problem should ever be denied. They are essential principles, after all. But politically, they are somewhat recondite and esoteric. They are more touchstones than talking points. They should be trotted out when needed, in the most casual and unapologetic manner possible. They should be the ever-present busts glowering authoritatively in the background, always visible as the politicians hammer away endlessly on variations of principles 1 and 3.

Mainstreaming is not just the use of slick communications techniques. Nobody objects to that. Mainstreaming is objectionable simply because it entails the abandonment of any of these core principles. The British National Party under Nick Griffin abandoned repatriation of non-whites and the whiteness of British identity. The National Front under Marine Le Pen has abandoned repatriation and the whiteness of French identity. I am sure both Griffin and Marine would grant that globally, the white race is on the path to extinction. But locally — politically — they have given up the struggle for white preservation. And there is no point in even asking people this crooked for straight answers about the Jewish problem, since facing it requires as much courage as the other three issues combined.

What about White Nationalist politics in countries that ban parties that make explicit appeals to racial identity, or explicit calls for repatriation of non-whites, or explicit reference to the Jewish problem?

First of all, such parties may choose to remain silent on these matters for political reasons, but everyone should still know where they stand. And to assure that, they cannot just let others accuse of them of heresy. They also need to offer a steady stream of martyrs for the truth.

Second, there should be no question in anyone’s mind that such parties intend to change the system by whatever means necessary. If they are allowed to speak freely and pursue power through legal political channels, they will do so. But, lest their enemies consider jailing their leaders or outlawing them entirely, they need to present a credible threat of violence. If forced by the system, perhaps every White Nationalist political party should be ready and willing to follow the example of the Communists and immediately switch to armed struggle. A party that presents a credible threat of disciplined, sustained, and effective violence is less likely to be banned in the first place. Who wants to remove the stopper from the mouth of hell?

I have dealt in detail with the case against mainstreaming [8] elsewhere. In a nutshell, mainstreamers are correct to emphasize that we must communicate with our people as they are now. As a vanguardist, I fully agree that we will never change our people’s thinking and pull the mainstream in our direction unless we communicate with them effectively. Thus we need to be maximally flexible and pragmatic in crafting White Nationalist messages that appeal to every white constituency. We need to colonize every shade of the political spectrum with white-friendly alternatives, so that no matter what party wins, white interests are sacrosanct. Our aim is full-spectrum intellectual and political hegemony [9], in order to move the mainstream toward White Nationalist policies.

Vantardism accepts the four essential principles outlined above, but fails to communicate them effectively because of two errors.

First, vantards insist on linking White Nationalism to unreconstructed Old Right [11] movements, particularly German National Socialism, which are impediments to persuading our people today. Half a century ago, George Lincoln Rockwell at least had a rationale for such tactics, but with experience, even he was moving away from them at the time of his death.

Colin Liddell [4] is quite eloquent in his dismay with such counter-productive posturing:

Imagine a scene, if you will: You live in a Northern English town in the run-up to next year’s UK general election. Recently UKIP has been making inroads, and the socialist Labour Party is worried enough to go canvassing door-to-door, so you get a knock on your door. Up pops your Labour candidate, but instead of talking about preserving the National Health Service or some other warm and fuzzy vote winner, he starts going on about what a great guy Pol Pot was and how he was right to march all those Cambodian bourgeoisie scum out into the Killing Fields. And, as for those Liberal-Democrat-supporting farmers, he suggests, the best way to deal with them would be to re-enact the Holodomor in the dales of Yorkshire, etc., etc.

He’s also got some old WWII-style cartoons, showing Nigel Farage as a diseased rat, and hands you one to post in your window. Now, assuming this is the way he canvases with everybody, how do you think he will do on election night?

If you answered “landslide victory” you are obviously a moron and should immediately put down reality as you might get seriously injured.

This is a mirror image of how nationalists who allow themselves to be associated with the Third Reich appear to members of the public, in other words as complete nutcases living in a particularly dark and sticky corner of the past. Socialists enjoy their enormous success because they skip lightly over Pol Pot, Stalin, Mao, and Kim Il Sung, and connect their ideas with what they redefine as the basic interests of the people, even though their vision is ultimately a poisonous and destructive one.

White nationalists of The Daily Stormer type – and my attack is not just aimed at Andrew Anglin but all those who strive to harness White Nationalism to Hitler’s corpse – effectively do the exact opposite. Even though nationalism is the essence of the basic interests of the people, many nationalists manage somehow to step over this strong point and instead connect themselves with the worst excesses of the past. It looks like a clear defeatist strategy, and defeatist strategies always look like deliberate betrayal, or at best stupidity.

Of course vantards can protest that Adolf Hitler did, in fact, agree with our principles. That is true of course, and to Hitler’s credit. It is also true of quite a lot of other intelligent whites. But the things we believe are true and good regardless of what any historical figure thought about them, one way or the other. So does harping on Hitler, no matter how factually correct one might be, make it any easier to persuade the people we are trying to save?

In the end, I am more interested in intellectual and spiritual matters than retail politics. I am on a longer journey, so to speak, so I am unwilling to travel as light [12] as Liddell would have it. But I also understand why BUGSters, Identitarians, and others might wish to step over the Old Right altogether. In the end, is any historical fact or figure as essential as the four principles outlined above? There are many paths to the truth, and National Socialism is just one of them.

The second vantard error is to insist on what I call “premature populism [13],” which is presented as an appeal to working class whites but is in fact usually just an appeal to stupid, vicious, and tasteless whites of all social classes (and an implied insult to working class white people). But our movement should aim to recruit whites of all social classes who are above average in intelligence, virtue, and taste. At this stage we simply don’t need inferior whites, and no special efforts should be made to recruit them. We’ll represent their interests just like the rest of our folk, but we would be foolish to trust our racial salvation to them.

Both vantards and mainstreamers are wrong about something very important, but both groups persist in their folly through “negative legitimization,” i.e., by rejecting the vices of the other without thereby having any virtues of their own. Mainstreamers like to legitimize themselves by pointing to vantard stupidity, and vantards reject any non-stupid form of vanguardism as just more mainstreamer cowardice and drivel.

The North American New Right stands for a vanguardism that is absolutely dogmatic about core principles but also maximally flexible and pragmatic — and thus potentially effective — about ways to communicate and actualize our principles. Therefore, we combine the strengths of our opponents while rejecting their weaknesses.

For nearly 70 years, post-war White Nationalism has been dominated by conservative mainstreamers and self-marginalizing vantards. The record of failure speaks for itself. Its time we think our way outside that box. Let’s try genuine vanguardism — for a change.