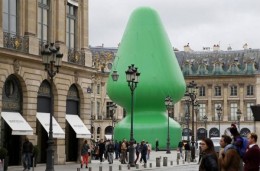 In 2012, I was walking my dog through San Francisco’s Golden Gate Park, and I came across an art and craft show in the sunken plaza between the Academy of Sciences and the new De Young Museum (which looks like a rusted aircraft carrier scuttled in the park).

As I wandered among the tables, looking at the wares, my dog blithely lifted his leg and peed on the one-millionth inept impressionistic rendering of the Golden Gate Bridge, which had been placed on the sidewalk, leaning against a table. I yanked him back, and, ascertaining that he had gone unnoticed, muttered “Everyone’s a critic” and swiftly exited the scene. [2]This callous tale is actually apropos of recent events. On Thursday, October 16th, the war on art joined the war on Christmas in Paris’ Place Vendôme when a 79-foot-tall inflatable sculpture called Tree was erected as part of the annual Fiac art fair. If Chris Olifi can sell “art” encrusted with elephant dung, who’s to say that a bit of dog urine is not just as good as an essay by Clement Greenberg or Arthur Danto? If it is art for Chris Burden [5] to be crucified on the roof of a Volkswagen, then why is it not art criticism to smack Paul McCarthy’s smug mug? If there is such thing as “auto-destructive art [6],” then why isn’t it just a particularly cutting review to literally deflate the pretensions of Tree? Let’s call it Performance Criticism. May it flourish.