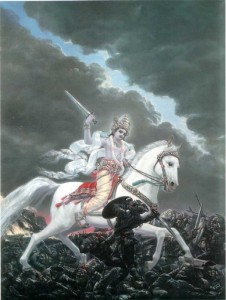 The following is an excerpt from chapter 16 of Savitri Devi’s The Lightning and the Sun. The title is editorial.

The advanced Dark Age of this present Time-cycle is the reign of the Jew—of the negative element; of the reverser of eternal values for the sake of “human” ones, and, finally, for that of his own, selfish interests; the reign of the “destroyer of culture,” as Adolf Hitler so rightly pointed out; of the age-old “ferment of disintegration.” It is natural that “ferments of disintegration” should become more and more active—more and more alive—as a Time-cycle nears its end.

It is—or was, for a very long time—a widespread belief among Christians that, when the Jews become once more the masters of Palestine, their “promised Land,” the “end of the world”—i.e., the end of the present Time-cycle—will not be far away. The Mohammedans behold, they too, in that same event, one of the tokens announcing the advent of the long-awaited “Mahdi.”[1] Thanks to England’s steadily pro-Jewish policy, the Jews have, in Palestine, since 1948, a State of their own. If the collective belief of many generations of men, both in the West and in the Near East, corresponds to any reality (and collective beliefs of that nature generally do, to some extent), then the great end must be drawing nigh. The existence of that strange—at the same time ultra-modern and unbelievably archaic—Israelitish State is an extra “sign of the times” or, rather, the symbol of a by far mightier and more dangerous reality, which is the actual “sign.” And that reality is none other than the ever-tightening grip of the Jew upon the whole world.

The truth about the Jewish State in Palestine remains that which Adolf Hitler had already understood—half through his knowledge of the Zionist Movement, half through his intuition of the natural enemy of Aryan mankind as such—and expressed, fourteen years before its foundation, namely that the Jews never intended to live in their independent country (which is, anyhow, far too small to contain them all) but that they just wanted “protected Headquarters—Headquarters with sovereign rights, free from the interference of other States—for their worldwide international organisation of deceit; a place of refuge for rogues who have been detected, and a high-school for rogues in the making . . .”[2] In other words Palestine may well be the mystical—and practical—centre of world-Jewry, but the Jewish danger has no “centre.” It is everywhere, and all the more difficult to fight that most people either refuse to see it or reject as “inhuman” the only methods through which it could be neutralised.

One need not read the famous Protocols of the Elders of Zion or the more modern speech which Rabbi Emanuel Rabinovitch delivered in Budapest, on the 12th of January, 1952 before the “Emergency Council of European Rabbis,”[3] in order to be convinced of the double, world-wide effort of the Jews, on one hand, to lower the biological level of all non-Jewish races, especially of the Aryan, and, on the other, to work themselves into all key positions in the economic, political, cultural, and spiritual life of all leading nations. It is, on the contrary, the obvious reality of that double effort—the presence of the international Jew (or of organisations entirely under his control) behind all “spiritual,” “cultural,” or political movements or thought-currents that allow, encourage, or logically lead to the mixture of races; behind all or practically all “literary,” “artistic,” commercial, or “medical” concerns, the aim of which is to encourage sexual perversity and any manner of vice, to provide silly amusements or to forward the love of empty speculation, in one word, to lower the physical, intellectual, and moral level of the individual; and, along with that, the ever-increasing number (and influence) of Jews (or of men completely under Jewish control) in world finance, world industry, and world politics—it is the fact that, whoever shows that he or she is fully aware of that effort and fully prepared to fight against it, “gets nowhere”; the glaring fact that nothing indeed happens in this ugly post-1945 world without the Jews’ order or permission, which strengthens, at least in us, the conviction that both the Protocols of the Elders of Zion and the recent Rabinovitch speech, and the like of them, are genuine documents. As genuine as the much older Bible and Talmud that also proclaim the Jews “God’s Chosen people.”

There resides, perhaps, the whole meaning of the rise and temporary victory and world-wide rule of the Jews as a “sign of the times”; it is based upon a lie; it is lasting through a lie; it is the most logical feature of the advanced Dark Age, which is, more and more, the Age of Lies.

The truth is that there is no other “God” but the immanent, impersonal divinity of Nature—of Life; the universal Self. No tribal god is “God.” Tribal gods are more or less divine, to the extent they embody and express a more or less divine collective soul. Yahweh, the tribal god of the Jews, is as little divine, as negative as they themselves—they, the typically negative human element of our Time-cycle. Through a series of lies, the Jews have been for the last 3,000 and especially for the last 2,400 years, leading an increasingly intensified campaign for the reversal of the eternal, natural values—i.e., an anti-truth campaign—in view of their own exaltation. They have, through the mouth of their prophets and “philosophers” proclaimed Yahweh “God of all men”; they have, then, concealed as many as they could of his nasty characteristics through a clever exploitation of the Christ myth by Paul of Tarsus and other Jews, half-Jews.[4] and judaised Greeks; they have, through the same, stressed anew the old, very old denial of the unity of the Realm of Life and proclaimed “all men” different in nature from the rest of creatures—and therefore above the general laws of Life—in order to buttress the false teaching that “one blood”
[5] flows in the veins of “all nations,” and to kill the idea (and the instinct) of a natural, God-ordained racial hierarchy. They have preached meekness and forgiveness and pacifism (to all, save to their own people) in order to rob the young, warlike Aryan race of its stamina; in order to kill its healthy pride. They are, now more feverishly than ever, encouraging its adolescents to make fun of “Nazi prejudices,” to despise purity of blood, and to marry outside their race (if thus be the impulse of “individual love”)—so that the race may disappear; encouraging them into perdition, both through the old superstition of “man” under its various modern forms, and through the whole atmosphere of subtle corruption in which the post-1945 world is literally soaking.

They must win—and they shall win—for the time being. Otherwise, it would not yet be the End. They must—and shall—see their dream—their immemorial dream of easy domination over a peaceable, “happy” hotchpotch of bastardised millions and ever more millions, that their long-drawn disintegrating action has rendered even more contemptible than they—at a hair’s breadth from its complete materialisation. Otherwise, the measure of iniquity—the measure of untruth—would not be full. And it would not yet be time for “Kalki”—the Avenger—to come.

3. Published through the care of Einar Åberg, Norrviken, Sweden.

4. Timothy, the faithful follower of Paul of Tarsus, was a half-Jew.