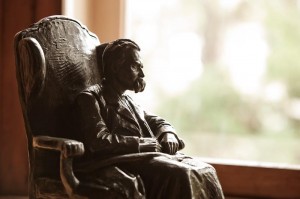 [1]This text continues the transcript by V. S. of Jonathan Bowden’s interview at the Union Jack Club in London on Saturday, November 21, 2009, after his lecture/performance on Punch and Judy [2]. The title is editorial.

Q: When did you decide to convert to paganism and why?

B: Well, I never really converted to paganism. I mean, there are some orthodox pagans, if you can have such a thing, who probably think I am not one. But I’m a Nietzschean and that’s a different system. Somebody made this for me. [Points to odal rune pendant.] And I like Odinic paganism sort of as an objectification of my sort of sensibility. Does one believe the gods objectively exist in another realm? Well, you see, religion is a philosophy about life which is sacristic and has rituals in which you partly act out, therefore it’s more important because it’s made slightly more concrete than ideas or it’s really just based upon ideas. There are relatively simple but powerful ideas at the crux of all the big religious systems. Most people are born in a system and just accept that and go along with it as long as it’s not too onerous or they feel like they live their life through it properly.

I just agree with the ethics of that type of Nordic paganism, which is really how the Vikings lived and how they behaved. I’m less concerned with small groups, which I respect. I like the Odinic Rite, but I personally believe that those sorts of things will only ever activate post-modern minorities and very small ones at that.

I think people should identify with what they think they are and the values that they hold. This symbol really means strength or courage or masculinity or the first man or the first principle of war or the metaphysics of conflict. So, I just think it’s a positive system of value.

I never really was a Christian. Culturally, I have great admiration for elements of Christian art. More so than most people who are pagan who have violently reacted against it. I don’t really share that emotionalism. But I don’t agree with Christian ethics. Deep down, they’ve ruined the West, and we’re in the state that we are because of them.

Q: Just added on to that: How do we create more Nietzscheans? How do we spread Nietzscheanism as a religion, as an idea?

B: You’ve got to get people quite young. I think you’ve got to introduce alternative value systems to them. This is a society that says weakness is good, weakness should be pitied, the ill are weak, the disabled are weak, people who’ve got various things wrong with them (too fat, too thin, bits dropping off) they need help. They may need help. But the value system that lies behind that desire to help worships the fact of weakness and the fact that people are broken. If you worship the idea of strength and tell the weak to become stronger, which is a reverse idea for helping them essentially. You help them in order to get stronger. You totally reverse the energy pattern and you’ve reversed the system of morals that exists in this culture now. You’ve reversed the sort of things that Rowan Williams or his predecessor or his likely successor always says, basically. I think that’s what you have to do.

I personally think it’s a moral revolution, not anything political, that will save the West, because all the technology is here, all the systems of power are here. You only have to change what’s in people’s minds. It’s very difficult though.

Q: So, to a young person watching this video, never heard of you before, where would he go to find out about Nietzscheanism?

B: Just go to the Wikipedia page, surprisingly, although it’s a bit trivial, is actually quite accurate in a tendentious way. Although some of the philosophical debates about him and the genealogy of his works might confuse people because it views it in an academic way. And you don’t need to put his name to it. There’s a cluster of power-moral, individualistic, elitist, partly antinomian, partly gnostic, partly not, partly pagan, vitalist and other ideas which go with that sort of area.

Strength is morality. Weakness is sin. Weakness requires punishment. If you’re weak, if you’re obese, if you’re a drug addict, become less so. Become stronger. Move towards the sun. Become more coherent. Become more articulate. Cast more of a shadow. It’s almost a type of positive behaviorism in some ways. But it’s not somebody wagging their finger and so on, because you’re doing it for yourself. It comes from inside.

Q2: Do you not think though that Nietzscheanism doesn’t have a transcendental element to it?

B: That’s why I’m wearing this [rune pendant], you see, because I probably think there ought to be such a thing. Many people need to go beyond that. If his thinking before he went mad, probably because he had tertiary syphilis, it’s up to sort of 1880, so we’re talking about thinking that’s 130 years old.

But it’s ruining us. For centuries we were strong even despite that faith, but of course we made use of it. The part that fits us is the extreme transcendence of Christian doctrine. That’s what Indo-Europeans like about that faith. The enormous vaulting cathedrals, the Gothic idea that you can go up and up and up. It’s that element in it that we like, and we made into ourselves. But we forgot the ethical substratum. We forgot the sort of troll-like ethical element that there is no other value but sympathy, there is no other value than compassion, that love is the basis of all life. And ultimately that is a feminine view of civilization which will lead to its collapse in masculine terms.

Q2: How would you view the works of Julius Evola?

But there will be people who go to Nietzsche and Thus Spake Zarathustra, which is really a semi- or pseudo-religious text, is not enough and they’ll want to go beyond that and they’ll want a degree and a tier of religiosity. The dilemma always in the West is what to choose. Back to Christianity or on to paganism? Which system do you choose?

Evola said he was a Catholic pagan, didn’t he? One knows what he means. But I see paganism peeping out of everything. I see paganism peeping out of Protestantism, the most Jewish form of Christianity, through its power-individualism and its extremist individuality (Kierkegaard, Carlyle, Nietzsche). I see paganism saturating Catholicism and peeping out of it at every turn, aesthetically, artistically, the art of the Renaissance, the return of the Greco-Roman sensibility, the humanism of the ancient world. Some of the greatest classicists were Medieval Popes and so on. I see it just looming out. The whole structure of the Catholic Church is a Roman imperial structure, Christianized. So, I see it peeping out.

Our law is Roman. All of our leaders were educated and steeped in the classical world to provide a dialectical corollary to Christianity without them being told that’s what is happening. The decline of the classics is partly because people don’t want to go back there, basically. So, you don’t teach it to anyone apart from tiny little public school elites, which are .2% of the population who read a few authors who no one else even knows exist. You know, big deal.

The difficulty with Evola is that it’s a very great leap for the modern mind. Although in his sensibility, I agree with his sensibility, really. I agree with him going out amidst the bombings, not caring. I agree with that sort of attitude towards life, which is an aristocratic attitude towards life. But we’re living in a junk food, liberal, low middle class society. You’ve got to start where you are. I think Nietzsche is strong enough meat for most people and is far, far, far too strong for 80% now.

Today, the mentally disabled have been allowed into the Paralympics. So, you will have the 100 yard cerebral palsy dash at the next Olympics in London in 2012. This is the world we’re living in. Nietzsche would say that’s ridiculous and so on. And that is a shocking and transgressive and morally ugly attitude from the contemporary news that we see. So, it’s almost as if Nietzsche’s tough enough for this moment.

But I’m interesting in that he said, “God is dead in the minds of men.” That doesn’t necessarily mean, of course, although he was a militant atheist, he’s living open the idea that . . . [God objectively exists—Ed.]. You see, the Christian idea of God was dying around him, mentally, and it has died. I mean, hardly anyone really, deep down, believes that now. Even the people who say that they do don’t in the way that they did 100 years ago or their predecessors did.

So, it has died, but I think there are metaphysically objectivist standards outside life. Whether our civilization can revive without a return to them is very open. It’s very questionable. Where that discourse is to come from is . . . The tragedy would be if Christianity sort of facilitated our greatness, but ended up ruining us, which of course might be the true thesis.

Now we’re getting into deep waters.

Q: What is your view of Abrahamic religions?

B: I think religion is a good thing. The Right always supports the right of religion to exist. Religion does cross ethnic and racial boundaries. Afghanistan was Buddhist once. I prefer people to have some sort of religious viewpoint, even the most tepid sort of thing, but none at all, because at least there is a structure that is in some sense prior.

But, personally, I prefer tribally based religions. I prefer religions that are about blood and genetics and honor and identity and are nominalist and that are specific. But I think people will adopt different systems because they’re physiologically different even within their group. You can see that about certain people. Certain people, Christianity suits them very well and they can be quite patriotic and quite decent people and so on in that system and there we are. But for me? No.

I’m a barbarian in some ways. People can worship what gods they want within the Western tradition, and that’s all right.