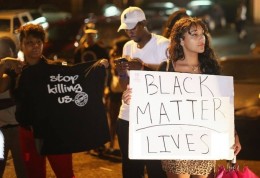 “Black lives matter,” goes the sign held by those demonstrating the entirely justified killing of giant wannabe thug Michael Brown. Yes, black lives matter, except when it comes to the major cause of deaths by violent crime among blacks: blacks themselves.

Irresponsible liberal sites like Slate do their best to perpetuate the myth that blacks are a victim group of other groups with misleading headlines like “Black Teens Vastly More Likely to Be Killed by Police Than Whites Even After Adjusting for Crime Rates [2],” a story that was quickly amplified through the rest of the mainstream media.

This story at Fox News [3] gives a good statistical breakdown on the allegations in the Slate story.

But the thing that the Fox News article misses is that not enough violent young blacks are being shot (or apprehended) by police. This is especially true if your primary focus is the safety and well-being of America’s blacks, because quite simply the problem of black people is not conscientious officers like Darren Wilson, who probably saved several future black lives when he emptied his gun into Michael Brown. No, black people’s problem is other violent black people.

Even though blacks are around 13% of the US population, they are 50% of homicide victims; while 94% of blacks murdered are murdered by other blacks. Most murders of whites (83% in 2011) are also by other whites, and, yes, a lot more whites are murdered by blacks than vice versa.

But although homicide is largely segregated, black homicide rates are six times higher than those of whites. This has nothing to do with black victimization and everything to do with the fact that blacks tend to live in black neighborhoods and whites in white ones. If America was totally integrated, we could expect the murder victim rates to converge, although most of the perpetrators would still be black.

Overall, murder rates seem to be falling. In 1995, the FBI reported that 9,074 blacks were arrested for homicide, but in 2012, the number was 4,203. This is due to a variety of factors, but one factor it is not due to is a general improvement in black morality, self-control, and leadership. Blacks still need to policed, and in order to reach the ever-desired equality of outcomes with whites, they will need to be policed at a much higher rate than present (and possibly drugged).

But thanks to the same egalitarian mindset that demands this equality of outcomes – and construes all differences of outcome as racism – such policing would be highly politically unacceptable, especially with black leaders ready to bleat “racism” at the drop of a baton. See my earlier article [4] on some of the underlying paradoxes of multicultural policing here.

It would be wrong to say, as certain conservatives do, that black leaders don’t care about black lives, because the fact is that blacks don’t really have any leaders; at least not in the sense of people who can mobilize and shape black consciousness and behavior like Martin Luther King or Malcolm X. One of the results of Civil Rights is that black communities have a lot less solidarity and self-control than before. Only “leaders” who follow the mob will be accepted. This is why all black leaders today merely seem like shysters who trail after events and put into words what the blind, unthinking, emotional mob is feeling.

But a community that loses its leaders in this way ends up behaving like a shapeless blob. It loses all agency, all discipline, all true respect for itself. The ego and superego die. Only the id remains, a sobbing, blubbering, hollering, bleating mob: rather than black lives mattering, we have black matter living.

Another slogan that bobbed up in the aftermath of Michael Brown’s death was “Get the killer cops off our streets.” From a conventional viewpoint, this is obviously a mad idea, but, in the light of the slow-burning relentless failure of all other efforts, I say let’s give it a try. Let’s allow black communities total autonomy and stand well back. Best for them and best for us!