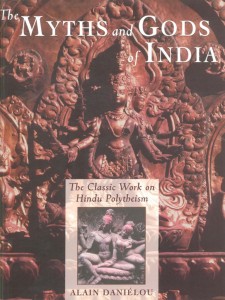 Alain Daniélou
The Myths and Gods of India [2]

Typically, those who profess an interest in what might be called “Indo-European spirituality” gravitate toward either the Celtic or Germanic traditions. The Indian tradition tends to be ignored. In part, this is because present-day Indians seem so different from us. We think of their culture and philosophy as “Eastern,” as alien. Physically, the Indians look very different from those of European descent (though higher caste Indians tend to look very European, right down to lighter skin and hair, and sometimes blue eyes). But if we wish to rediscover the religion and traditions of our ancestors, what better place is there to begin than with India? The oldest Indo-European texts are the Vedas, after all. To be sure, it is hard to separate what comes from the ancient Aryans in Indian religion, myth, and mysticism, and what was contributed by the indigenous peoples conquered by the Aryans. But the same problem exists with respect to the Celtic and Germanic traditions. In addition, we know far more about the culture and religion of the ancient Aryans who invaded India, than we do about the culture and religion of the Celts and the Vikings. For one thing, more ancient texts survive in India. Therefore, anyone wishing to re-construct the “old ways” must become deeply immersed in all things Indian.

It is a cliché to state this in a review, but I write the following with total sincerity: if you read only one book on Hinduism, it must be Daniélou’s Myths and Gods of India. Indeed, it is hard to imagine why one would need to read any other. Daniélou’s account of Hinduism is exhaustive, profound, and detailed. The book contains, first of all, cogent arguments on behalf of polytheism.

It details the Indian cosmogony and cosmology; the nature of Space, Time, and Thought; the nature of Brahman and Maya. Daniélou gives a complete description of every major Hindu divinity in terms of his or her function, myths, and symbolism. He details the minor gods and genii. He discusses the theory behind Mantras and Yantras. There is even extensive coverage of ritual, and the manner in which the gods must be worshiped.

Daniélou gradually “went native” and stayed in India many years. In time, he became known throughout the world as an authority on Indian music and culture. He published works dealing with Hindu religion, society, music, sculpture, architecture, and other topics. It was Daniélou, more than anyone else, who was responsible for popularizing Indian music in the West (among other things, he was the “discoverer” of Ravi Shankar). Daniélou died in 1994.

The Myths and Gods of India is a delight to read, but it can also be treated as a reference work for those needing a clear and accurate account of various gods or Hindu religious concepts. For the student of Indo-European culture, the book is a treasure trove. Indeed, those who are familiar with the Indo-European comparativist school of Georges Dumézil, Jaan Puhvel, and others, will get the most out of this book. I will offer a few brief examples here.

Daniélou writes on page 27 that “Human beings, according to their nature and stage of development, are inclined toward . . . different aspects of the Cosmic Being. Those in whom consciousness is predominant worship the gods (deva); those in whom action or existence predominates worship genii (yaksha) and antigods (asura); and those in whom enjoyment or sensation predominates worship ghosts and spirits (bhuta and preta).” This suggests, of course, the Inda-European tripartition identified by Dumézil.

On page 66 we learn that Soma was “brought to earth by a large hawk,” just as Odin, in the form of an eagle, brought mead to the Aesir.

On page 87 we are told that “The earth is also represented as a goddess, or as a cow that feeds everyone with her milk. She is the mother of life, the substance of all things.” What can this remind us of, except the Norse Audumla?

There also seem to be parallels between Agni (the god of fire) and Loki. Like Loki, Agni is an outcast among the gods. Daniélou tells us further that, “The fire of destruction, Agni’s most fearful form, was born of the primeval waters and remains hidden under the sea, ever ready to destroy the world” (p. 89). This is reminiscent of the Midgard Serpent, the progeny of Loki.

Page 151: “When Vishnu sleeps, the universe dissolves into its formless state, represented as the causal ocean. The remnants of manifestation are represented as the serpent Remainder (Sesa) coiled upon itself and floating upon the abysmal waters.”

Daniélou tells us (p. 92) that “the sun . . . is envisaged [by the Hindus] under two aspects. As one of the spheres, one of the Vasus, the physical sun is the celestial form of fire, of agni. As the source of light, of warmth, of life, of knowledge, the solar energy is the source of all life, represented in the twelve sons-of-the-Primordial-Vastness (Adityas), the twelve sovereign principles.” In Futhark (pp. 51-52), Edred Thorsson tells us that “The sun was known by two special names in the North . . . Sol represents the phenomenon, while sunna is the noumenon, the spiritual power residing in the concept.” Also, the “twelve sons-of-the-Primordial-Vastness” immanent within the solar energy must remind us of the twelve sig-runes that make up the Wewelsburg “sun-wheel” of Karl Maria Wiligut.

Page 99: “When the gods were receiving the ambrosia of immortality, the Moon [Soma; equivalent to Mead] detected the anti-god Rahu disguised as a god. Because of the Moon Rahu had to die, but although his head was severed from his body, he could not truly die, for he had tasted the ambrosia. His head remained alive.” Mimir?

Page 103: “Rudra, the lord of tears, is said to have sprung from the forehead of the Immense-Being (Brahma) and, at the command of that god, to have divided himself into a male form and a female form . . . ” Athena?

Page 103: “The Maruts (immortals) are a restless, warlike troupe of flashy young men, transposition in space of the hordes of young warriors called the marya (mortals). . . . They are the embodiment of moral and heroic deeds and of the exuberance of youth.” Maruts = Einherjar; Marya = Indo-European Männerbünde.

Page 111: “Indra had been the deity worshiped among the pastoral people of Vraja.” Again, just as Thor was.

Page 119: “He catches the evildoers and binds them with his noose.” Criminals sacrificed to Odin were hung. Varuna also “knows the track of birds in the sky,” just as Odin knows the track of Huginn and Muninn.

Page 132: The god of death is named Yama, which means “Twin” (Ymir). “Yama’s brother is the lawgiver, Manu, who shares with him the title of progenitor of mankind.” Yama “owns two four-eyed dogs with wide nostrils . . . They watch the path of the dead.” What can this remind us of except the Greek hellhound, Cerberus?

Page 138: “In contrast to the gods, the antigods [asura] are the inclinations of the senses which, by their nature, belong to the obscuring tendency, and which delight in life, that is, in the activities of the life energies in all the fields of sensation.” This is an accurate description of the Norse Vanir. Asura is cognate with Aesir, so, oddly enough, the term shifts meaning either in the Norse or the Indian tradition.

Page 159: The four ages (yugas) are represented as white (the golden age), red, yellow, and black (the dark age). The stages of the alchemical process (as represented in the West) are black, white, yellow, and red.

Pages 243-45 detail the Upanishadic account of creation out of the primal man Purusha: “He desired a second. He became as large as a woman and man in close embrace. He divided himself into two. From him arose a husband and a wife. Hence it is that everyone is but half a being. The vacant space is filled by a wife.” This is extraordinarily similar to the account of the creation of men and woman given by Aristophanes in Plato’s Symposium. The world is then created out of Purusha’s body-just as the world is created out of Ymir’s body in Norse myth. “The virile member was separated; from this virile member came forth semen and from semen the earthly waters.” This is identical to the account of the creation of the ocean in the Greek myth of the sacrifice of Ouranos by Kronos.

The account of the hero Kumara/Skana (pp. 297-300) is strikingly like the saga of Sigurd, and also similar in some respects to the Parzival of Wolfram von Eschenbach. The “essences” (apsaras; pp. 304-305) are “water nymphs, eternally young women who are the courtesans and dancers of heaven.” Rhine Maidens? “They are depicted as uncommonly beautiful, with lotus eyes, slender waists, and large hips. By their languid postures and sweet words they rob those who see them of their wisdom and their intellect.” Sirens? “One can master them by stealing their clothes while they bathe. They choose lovers among the dead fallen on the battlefield.” Valkyries?

The above merely scratches the surface of this immensely rich text, which demands careful study and multiple readings.