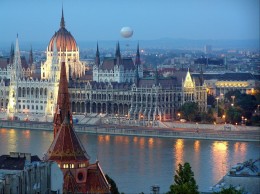 I will not be attending the National Policy Institute Conference in Budapest because the conference has been shut down by the Hungarian government. Furthermore, I see no reason to believe that there will be an alternative conference because:

I am announcing this because I know of at least ten people who are planning to fly to Budapest in the next 24 hours and have the right to know the risk that they will be spending hundreds of dollars and many hours traveling, only to be turned away at the border — or to find, if they do get inside Hungary, that nobody and nothing awaits them.

I am sure NPI is planning to announce the same things eventually, but it may not be soon enough to prevent people from needlessly wasting money and time on a complete fiasco.

I am canceling my tickets and requesting a complete refund for my registration.

The aim of this trip for me was knowledge, fellowship, and networking. But I also hoped to at least break even by selling books. At this point, the Budapest leg of the journey looks like it will be a complete financial loss, and I see no reason to risk any more scarce money on the slim chance that I will be able to get into Hungary and meet up with a few people whom I already know. After all, it is not my money to waste — it is your money, the money of Counter-Currents donors and customers.

I am sorry that this potentially wonderful event apparently will come to naught, and I want to thank the organizers for the audacity to dream. It is better to have tried and failed than never to have tried at all.