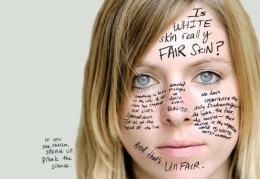 Graffiti on a condemned building

Of course, being a Republican, the Alabama Congressman immediately covered his truthful statement in half-truths and comforting lies. He continued that, “And the way in which they’re launching this war is by claiming that whites hate everybody else. It’s a part of the strategy that Barack Obama implemented in 2008, continued in 2012, where he divides us all on race, on sex, greed, envy, class warfare, all those kinds of things. Well that’s not true.”

Brooks isn’t wrong – the Democratic Party does depend on identity politics to hold its coalition together. However, implicit in Brooks’s comment is the dreamy insistence that race, class, and interest conflicts simply don’t exist, and we are all “American” – whatever that is. White American conservatives – and only white American conservatives – cling to this desperate faith that a universal American identity can exist free of white guilt or tribal ties. Not surprisingly, in the eyes of academia and the media, “colorblindness” is the new racism [3].

Brooks went on to say that “It doesn’t make any difference if you’re a white American, a black American, a Hispanic-American, an Asian-American or if you’re a woman or a man. Every single demographic group is hurt by falling wages and lost jobs.”

It’s true that mass immigration has a negative impact on quality of life for Americans qua Americans, but this is overcome if it means a growth in the power of your tribe and the related welfare payoffs, job set asides, political clout, and outright wealth transfers. Needless to say, Brooks can’t recognize this – lest the “colorblind” foundation American conservatism is built upon finally crumble.

Nonetheless, Brooks deserves credit for identifying the key truth of American politics – the American Left wages a never ending War on Whites. More than that, waging a War on Whites is all they do. Behind all the shrieks of moral outrage and snarky tweets and Tumblr posts mocking a white man from Alabama lies the stark truth at the heart of American progressivism – it is about hurting white people as a people. And that is the only thing it has to offer.

There is no part of what could be called progressivism that American liberals are not willing to abandon – or even condemn – if it means dispossessing whites. Nowhere is this more evident than in immigration policy.

Historically, it was the American Left that usually led the effort to stop mass immigration. In 1905, the American Federation of Labor supported [4] the Chinese Exclusion Act, saying,

We make no pretense that the exclusion of Chinese can be defended upon a high ideal, ethical ground, but we insist that it is our essential duty to maintain and preserve our physical condition and standard of life and civilization, and thus to assure us the opportunity for the development of our intellectual and moral character. Self-preservation has always been regarded as the first law of nature. It is a principle and a necessity from which we ought not and must not depart.

Those who favor unrestricted immigration care nothing for the people. They are simply desirous of flooding the country with unskilled as well as skilled labor of other lands for the purpose of breaking down American standards. America, however, where men are free to voice their desires for greater and still greater advancement in economic conditions, is the greatest country on earth. Its people live better than anywhere else, and the trade unions are responsible for maintaining those standards. Those who believe in unrestricted immigration want this country Chinaized. But I firmly believe there are too many right-thinking people in our country to permit such an evil.

Harry Reid [7] opposed mass immigration in the past. The greatest champion of immigration restriction in the 1990s wasn’t Pat Buchanan [8] (who was also campaigning on social conservatism and trade), but Barbara Jordan [9], the first black female to speak to the Democratic National Convention. And perhaps the most inconvenient truth of all is that the original champion of the Chicano Causa – the now sainted Cesar Chavez [10] – was a huge opponent of mass immigration [11], regarding illegals as no better than scabs.

Today, aside from a few lonely Blue Dog Democrats struggling to hold off the Tea Party, the Democratic Party monolithically supports mass immigration. More importantly, they defend it using principles straight out of most reactionary Social Darwinism of the 1800s. Democrats support mass immigration even though it has contributed to the utter collapse of organized labor, rising income inequality, and the inability to provide social services.

Instead of arguing for a living wage, Democrats scream that we “need” illegals precisely because we can force them to work like helots in the field for almost no money as opposed to greedy Americans who want high wages. The great champions of social justice are united with the contemporary Robber Barons in defense of cheap labor. And why? Because a Hispanic America, a poor America, a Third World America, is a non-white America.

Or take the environment. Again, as Green Party standard bearer Ralph Nader put it when confronted with the idea of an America with 400 million people, “We don’t have the absorptive capacity for that many people . . . we have to control our immigration.” The great conservationists of American history such as Madison Grant [12] and other leading WASPs [13] were also the great champions of immigration restriction and eugenics. The Sierra Club for many years advocated population stabilization, which implies opposition to mass immigration.

However, the Sierra Club abruptly reversed position after receiving a large donation from a Jew [14] on the condition they never mention immigration again. Other environmental groups, perhaps for similar reasons, have remained mute. Even as global warming hysteria shows no signs of slowing, and Americans are told to watch their “carbon footprint” because of the “environment,” American environmentalists are quiet as a tomb about the destruction of American wilderness and the dramatic increase in consumption that is a direct result of mass immigration. There is even silence about the way the wilderness near the Southern border has been utterly destroyed by mobs of rampaging illegals and how national parks have become havens for drug cartels.

It’s incredible to think that it was the Left – and even the New Left in America – that was the great champion of “free speech.” Now, in the age of trigger warnings, speech codes, and bans on political parties that stand up for European populations, the Left is the greatest enemy of the “freedom” they love so much to talk about.

There’s nothing they have not abandoned.

Feminism? We’ll go after white frat boys, but you better keep your mouth shut about women raped by blacks or oppressed by fundamentalist Muslims.

Peace? Better tell that to the Serbs who were killed because General Wesley Clark said, “There is no place in modern Europe for ethnically pure states. That’s a 19th-century idea and we are trying to transition into the 21st century, and we are going to do it with multi-ethnic states.”

Remember “dissent is patriotic” after 9/11? It only took America’s first black President to transform concern over civil liberties from the sign of a brave and informed citizen to an indication that one is a paranoid, survivalist traitor, probably linked to racists and “sovereign citizens.” Indeed, citizen is somewhat of a dirty word.

Trade? Destroy those factories and ship jobs overseas. Thinking your country should help you have a good job is another part of white privilege.

Race-blind government? Hubert Humphrey famously said [16] of the Civil Rights Act, “I’ll eat my hat if this leads to racial quotas.” Humphrey died in 1978, his headgear undigested. Today, if you say you don’t want government to consider race, you have just proven what a big racist you are.

Cut down every tree so we can build barrios and parking lots. Overload and dismantle the welfare state. Force those hospitals to close [17]. Make every worker in America slave for crumbs so Wall Street can make more money. Then send that job overseas. Put that hijab on your head, woman! Hey queer, you better read this Koran and respect what this fundamentalist sheik has to say. Spy on everyone’s email, criminalize questioning the state, dispatch drones to bomb every continent, and then import the survivors of your bombing raids into your own country and take revenge on your own population.

None of it makes sense until you realize one very simple thing – the War on Whites is modern progressivism. It is the entirety of what it stands for and what it does. There is no Double Standard, only “The Standard” – whites are always wrong.

What about liberal whites? Take a look at the kinds of things the #UniteBlue types write about the #WarOnWhites. They aren’t arguments – just blunt insults. “There’s no more soy [18],” “not enough of us are in prison freeloading, [19]” “some people say Jesus didn’t speak English [20],” derp, derp, derp. Needless to say, we can already anticipate the response if someone tries to bring up incidents like the Knoxville Horror [21] or the Wichita Massacre [22]. As professional black “writer” Leonard Pitts put it, “Cry me a river [23].”

Needless to say, these same people would be horrified about far more subtle jokes about blacks – because they wouldn’t just be funny, they would be true statements. The biggest weapon for waging the War on Whites is the biological weapon of the non-white population, which destroy white cities, cultures, and civilizations more absolutely and completely than an atomic bomb. The field of victory after the War on Whites are the streets of Detroit, or Camden, or East Saint Louis. We remain silent about the casualities of these conquests – one could even say we “deny” them or engage in “revisionism.”

In contrast, everyone feels free to bash whites, even though the “jokes” made against whites are neither true nor funny nor even clever. They’re just blunt insults – the equivalent of saying “blacks are stupid” and then expecting applause for your rapier wit. The open scorn displayed for the white race by other whites is no longer status seeking. It’s just crude hatred. It’s a transition from social proof into outright race cuckoldry [23], deriving self-worth and moral satisfaction from the degradation of your kinsmen. It’s no longer a social phenomenon, but seemingly a biological one, the genetic death spiral of whites who do not have a future, and are proud to die out.

What of it? In every war, there are traitors. And whatever the giggling of the ruling class and its collaborators, at least the conflict has a name. In every university, in every newsroom, and in the halls of the Department of Justice, the Department of Housing and Urban Development, and the National Security Agency, there is a War on Whites. It is no longer even denied, but openly defended. All other arguments have fallen away and hate is all they have left.

We should be grateful for this. As Patrick Henry said, “Gentlemen may cry peace, peace . . . but the war has already begun!” It has been waged for decades. It’s just that only one side has been fighting. For at its core the War on Whites is a War on Noticing [24] too. But it seems now that, however hesitantly, ordinary European-Americans are beginning to notice.