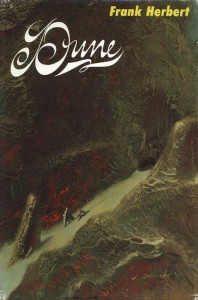 If science fiction is quintessentially “progressive” and fantasy literature is “reactionary,” then we need a third category for the six Dune books by Frank Herbert (1920–1986)—not to mention George Lucas’ six Star Wars movies—which combine futuristic, sci-fi elements with the archaic values and magical universes of fantasy.

Fortunately, French New Right theorist Guillaume Faye [4] has already coined the perfect term for this genre: archeofuturism [5], which for him is a kind of political philosophy and philosophy of history. But it also captures a unique fictional genre which just so happens to be close to the hearts of many on the far Right, Old and New. (Faye himself ends his book Archeofuturism with a novella depicting the system he advocates.)

Dune, the first novel of Herbert’s series, is the best-selling science fiction novel of all time. Dune is set more than 21,000 years in the future. Mankind has colonized the galaxy, creating highly advanced technologies—spaceships, glowglobes, ornithopters, lasguns, protective energy shields, etc. Entire planets, such as Ix and Richese, are devoted to advancing technological civilization.

Yet religion and mysticism are also very important in the Dune universe. Herbert shows how religion can be cynically used by the powerful as a tool of social control. But he also shows how sincere religious fanaticism can revolutionize societies. For instance, more than 10,000 years before the setting of the first novel, a religious war, the Butlerian Jihad, destroyed all artificial intelligences and banned the creation of thinking machines. Herbert explores how ecumenical ideas—like the Traditionalist notion of the transcendent unity of religions—can be used to promote peace and tolerance, whereas exclusive forms of monotheism lead to intolerance and conflict. Finally, Herbert is very aware of the importance of religion and rituals of hierarchy and initiation in bonding together hierarchical societies, especially secret societies.

The ban on artificial intelligence forced human beings to develop their mental and physical capacities. Three groups have gone the furthest in this direction.

First, the Bene Tleilax have created mentats—human beings who can perform calculations, solve problems, and store data like computers. The Tleilaxu have also mastered genetic engineering, allowing them to grow human beings and other organic substances from isolated cells and manipulate their genetics. “Gholas” are cloned and genetically altered human beings. “Face dancers” are human beings which can take on the personality and appearances of other humans.

Second, the Spacing Guild has learned to replace computers for faster than light travel with the mental powers of its navigators, who are mutated humans with prescient awareness that allows them to pilot faster-than-light ships. (There is no talk of “folding space” and “traveling without moving” in Herbert. That comes from David Lynch’s Dune script.)

Third, the Bene Gesserit sisterhood is a quasi-religious order the goal of which is to guide the future evolution of mankind through eugenics. The sisterhood has also honed human physical and psychic abilities, endowing them with remarkable skills as fighters, mind-readers, negotiators, and all-round manipulators. The Reverend Mothers of the Bene Gesserit also share in the memories of all previous Reverend Mothers, which they pass along psychically to their successors.

Both the Guild and the Bene Gesserit are dependent upon a drug, the “spice melange,” which has the power to extend life and expand consciousness. And, since the civilization of the galaxy depends on space travel, the spice is the most valuable substance in the universe. And it is found on only one planet: Arrakis, also known as Dune.

The Guildsmen use the spice to mutate their bodies and endow their minds with prescience. The Bene Gesserit use spice to expand consciousness. They employ a related substance, the water of life, to open their minds to the collective ancestral memories of the sisterhood.

Because, however, women are unable to expand their consciousness into certain regions through the water of life (for instance, male ancestral memories), but all men who take the water of life die, the Bene Gesserit are trying to breed a male who has the capacity to transmute the water of life and peer into pasts and futures invisible to the sisterhood. Their name for this individual is the Kwisatz Haderach, which means “shortening of the way.”

Both the Bene Gesserit sisters and the Bene Tleilax gholas are capable of accessing memories that could not have been simply stored in a human brain. Thus Herbert’s cosmos presupposes the reality of a kind of metaphysical dualism in which individual and collective consciousness (memory) can exist without a material substratum. Furthermore, both the Bene Tleilax and the Bene Gesserit practice “prana-bindu” yoga, which endows them with superpowers, meaning that their yoga is a Left-hand path that produces Tantric siddis (superpowers).

The idea of a Spacing Guild, as well as hierarchical-initiatic orders like the Bene Tleilax and the Bene Gesserit, all of which are medieval institutions that wield what are, in effect, magical powers, place Dune firmly in the archaic and magical cosmos of fantasy literature.

But there is swordplay as well as sorcery in the Dune universe: the galaxy is ruled by a Padishah Emperor, while many of the planets are ruled by dukes, counts, and barons who form a “Landsraad”—a college of noble houses. (Other planets, like Bene Tleilax, Ix, and Richese are equivalents of the medieval free cities.) It is an essentially feudal system.

Herbert, moreover, did not bemoan this system as repressive and unfair. Indeed, he regarded feudalism as a superior form of government and one uniquely suited for mankind’s expansion throughout the galaxy. Feudalism, unlike liberal democracy, is a highly decentralized system, which is suited to widely scattered planets and high transportation costs. Furthermore, feudalism, unlike liberal democracy, is capable of pursuing grand strategies over the vast spans of time necessary for space travel and colonization.

Because of the decentralization of power and costs of transportation, the different planets of the Empire evolve very different cultures, some free, martial, and gallant (such as Caladan, ruled by the Atreides dukes—who trace their descent to the ancient house of Atreus), others despotic, sybaritic, and cruel (like Giedi Prime, ruled by the Harkonnen barons). But all planets have hierarchical, aristocratic forms of government. Herbert never has a kind word for liberalism or democracy.

In the Dune universe, martial and aristocratic values are dominant, and commercial values, although unavoidable and widespread, are regarded with aristocratic disdain. Great houses compete and ally with each other in accordance with iron codes of honor. Atomic weapons are outlawed. Laser and projectile weapons are seldom used because of the existence of energy shields, which can stop any projectile and destroy both attacker and target when they come in contact with a laser. Shields are, however, unable to protect from slow blades at close range, so high-tech shields are actually conducive to swashbuckling combat with swords and knives. Vendettas are governed by the iron code of kanly and can be settled through treachery or duels to the death.

Why do these novels have such a powerful appeal on the Right? The answer, of course, is that Frank Herbert was no liberal. No liberal praises feudalism over democracy, hierarchy over equality, and martial virtues over bourgeois ones—but Frank Herbert does. No liberal attaches great weight to heredity, speaks of racial memories, praises eugenics, and explains the Darwinian benefits of subjecting human populations to the ruthless culling of harsh environments—but Frank Herbert does.

Herbert believes in essential differences between men and women, which was uncontroversial when he began writing Dune more than 50 years ago, but today it is considered the height of reaction.

Herbert’s novels are deeply and disquietingly anti-humanist and anti-individualist. He thinks in terms of the evolution of the human race over vast spans of time. He looks at history as a general on a battlefield, coolly sacrificing individual lives for the greater good. His novels are filled with well-drawn individuals, but that just makes it all the more poignant when they go willy nilly to their doom—or are resurrected as gholas to play another part in a larger drama.

Herbert traces the rise and fall of civilizations through great cycles, moving from vital and heroic barbarism to cynical, sclerotic, and decadent civilizations, which are then liquidated by fresh barbarians. (His view of historical cycles is closer to Giambattista Vico and Oswald Spengler, both of whom see vital barbarism as the first phase of history, as opposed to the Golden Age of the Traditionalists.)

For the sentimental and humanistic, the overall effect can be bleak, depressing, and distasteful.

Aspects of Dune do, of course, appeal to the Left. When it first appeared in 1965, its ideas of mind-expanding drugs and sprinkling of Hindu terms found receptive ears in the counter-culture.

Dune can also be read as an anti-colonial allegory. Arrakis produces the most valuable commodity in the universe, but its people—particularly the Fremen of the desert—live in utter deprivation. Yet they dream of one day seizing control of Arrakis through guerrilla warfare and using its wealth to improve their lives.

This leads to a third theme in Dune which is popular with the Left, namely ecology, for the Fremen’s dream is the creation of the Kynes family, both father and son, the Imperial Planetologists of Arrakis who set in motion plans to reclaim parts of Arrakis from the desert and create an earthly paradise.

None of these themes appeal to the Republican or libertarian Right. But the New Right can and does embrace deep ecology, Eastern spirituality, anti-colonialism/anti-capitalism, and even a bit of spice—together with Herbert’s anti-egalitarian biopolitics—in a wider synthesis.