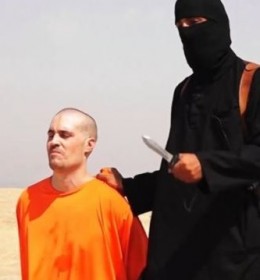 For the first time since 1815, Britain and the US are effectively at war, although rather than the bayous of Louisiana or the forests of the Canadian borders, the battleground is the deserts of the Middle East, where a “Brit” with a London accent — dubbed by the ever inventive and alliterative UK press “Jihad John” — took fanatical pleasure is hacking off the head of an American journalist after US forces bombed Islamic State forces advancing on Kurdish positions.

The fact that James Foley willingly put himself in the danger zone and ended up making more news than reporting it — a definition of bad journalism — is yet more evidence of out-of-place America involvement in the Middle East, as were the US bombings of the Islamic State fighters that provoked Foley’s decapitation.

British involvement in the Middle East, however, is a different matter. Recent reports suggest that among the estimated 50,000 Islamic State fighters, one to four percent is British. This means that there are considerably more British Muslims fighting under the black banner of jihad than in the UK’s own army.

“British” of course is a deracinated term for anybody having British citizenship. With so many Cockney, Brummie, and Yorkshire accents amidst the ranks of the Islamic State, any attack by Western powers on it is likely to kill British subjects — hence, at least in part, this conflict is one between the US and the looser, multicultural definition of the UK that we have been forced to accept.

Through mass immigration and rapid expansion of British identity in the post-War period (after it had served its function helping to crush German nationalism), “Britishness” has become a degraded and adulterated concept that is divided from its organic essence. This is why White Britons are once again identifying overwhelmingly as Scots, English, and Welsh — the racially and culturally allied components that initially composed it — rather than as Brits. Only in Northern Ireland (and Western Scotland with which has close links) is there still a residual belief in a greater “British” identity, but this is for purely local and anti-Irish reasons. Moves for Scottish independence — there is a referendum next month — have also gained strength from the decline of British identity into a mere legal and bureaucratic category.

At every turn, the media, the state, and official institutions pretend that indigenous Britons and bureaucratic Britons — immigrant populations with UK passports — are the same. You see them given high profile jobs in the media, woven into the stories of popular soap operas, and allowed to build mosques or other assertions of their ethnic and cultural identity as if they were merely setting up a chapter of the Women’s Institute or the Boy Scouts. Anyone who challenges this narrative is, of course, denounced as a “racist,” fired from his or her job, and/or arrested for hate crimes.

Yes, according to our masters, Jihad John is just some young British person who accidentally strayed across an “evil ideology” on the internet one day.

The official narrative is that we have to think of them as flesh of our flesh and blood of our blood. This may be partially true for those of them that intermarry and accept our ways — but even in that case it can only ever be partially true, never entirely so.

When I observe the absurdity of fanatical, brown-skinned Muslim jihadists, following a religion cooked up by a sixth century desert thug accorded full Britishness by the British state and media, I am reminded of the Middle Eastern parable of Zohak’s Serpent.

Zohak – also known as Zahak – was a handsome, morally vacuous prince, who, prompted by the Lord of Darkness Ahriman, gained power by killing his own father. Next Ahriman, disguised as a cook, beguiled Zohak with many days of sumptuous feasts until Zohak was so grateful that he offered Ahriman whatever he wanted in return. Ahriman asked only to kiss his shoulders, whereupon two black snakes grew from the places where he was kissed. These could not be removed. As one was cut off another grew in its place. Then Ahriman appeared in disguise as a physician, and advised Zohak that the only way to alleviate his situation and stop the serpents attacking him was to feed them human brains every day, which he then did from the ranks of his subjects. In this parable you have many of the elements that we see in the present situation: the Oedipal nature of a Western society that betrays its past, the arts of deception that have induced us to swallow the lies of multiculturalism, and the pointless attempts to kill a monster that effortlessly regenerates.

You also have the spectacle of the king, who, through his stupidity and hedonism, has grafted alien elements on to his body that can no longer be removed; and, as a consequence, being forced to sacrifice the lives and brains of his subjects to ameliorate their poisonous presence.