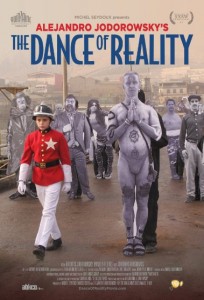 Alejandro Jodorowsky’s The Dance of Reality [2]

is an extraordinary film. Born in Chile in 1929 to a Jewish family originally from Ukraine, Jodorowsky began his career on the stage as an actor and director, then moved into film. His earlier films are Fando y Lis (1968), El Topo [3]

(1990). In the mid-1970s he also worked on an abortive adaptation of Frank Herbert’s science fiction classic Dune [7]

Between films, Jodorowsky developed his talents as a graphic novelist (The Incal, The Metabarons, etc.). He also became a guru of sorts, authoring a number of books on spirituality and psychotherapy, including Psychomagic: The Transformative Power of Shamanic Psychotherapy [8]

, The Spiritual Journey of Alejandro Jodorowsky [9]

, The Way of Tarot: The Spiritual Teacher in the Cards [10]

, and The Dance of Reality: A Psychomagical Autobiography [11]

, which ties in with the new movie.

The Dance of Reality seems like an old man’s farewell to life, but it may not be the last film of this amazingly vigorous octogenarian, for Jodorowsky is apparently working on a sequel to El Topo called Abel Cain or The Sons of El Topo.

Jodorowsky is a surrealist filmmaker, a quintessential product of the 1960s counter-culture, who sampled and built upon all its experiments in psychedelic drugs and esoteric spirituality, East and West. The Dance of Reality contains Jodorowsky’s familiar combination of the grotesque, hilarious, and profound. But it adds a surprising new element, since it can be read as very critical account of Jewish identity, communism, and their interconnections. Imagine one of the more controversial episodes of Curb Your Enthusiasm as Federico Fellini might have directed it, and you’ll get an inkling of The Dance of Reality.

The Dance of Reality is the story of Jodorowsky’s own childhood set in his hometown of Tocopilla, Chile in the 1930s. Young Alejandro’s father Jaime (played by Alejandro’s son Brontis) is a Jewish Communist with Ukrainian roots. A former circus acrobat, Jaime runs a lingerie shop called Casa Ukrania. Its sign is flanked by red stars with hammers and sickles. Inside is an imposing portrait of Stalin. Jaime even dresses like Stalin and imitates his hairstyle and mustache. Alejandro’s mother Sara is a tall redhead with enormous breasts. Her histrionic and imaginative personality is hilarious communicated by the little fact that she sings all her lines like an operatic soprano.

At first, The Dance of Reality seems to be the story of Jodorowsky’s boyhood (like Fellini’s Amarcord), but it is really about his father. Jaime Jodorowsky is portrayed as a sadistic, authoritarian monster. A quintessential bourgeois, he chases limbless mine-workers, who have been reduced to begging, away from his shop, which caters only to the rich. His commitment to Communism evidently has nothing to do with compassion for the proletariat. Instead, it is motivated by his authoritarian personality, his desire for social mobility and power, and his resentment of the goyim, who treat him like an outsider.

Alejandro Jodorowsky’s own views of Communism can be inferred from the following episodes in the film.

1. Young Alejandro is given a pair of bright red shoes. He dances for joy around the town. Carlito, a poor Mestizo shoe-shine boy praises the red shoes then weeps because he will never be able to afford a pair. The little Jewish boy feels sorry for the poor proletarian child and gives him his red shoes. Carlito, overjoyed, dances off in them, but when he gets to the rocks by the sea, the slippery rubber soles send him hurtling to his death. The red gifts of Jewish pity just lead to death and suffering for the proletariat. (The ur-text here, of course, is the Hans Christian Andersen fairy tale “The Red Shoes” and the 1948 Powell and Pressburger film The Red Shoes [12]

2. When 300 wandering bubonic plague victims arrive in Tocopilla, the residents barricade themselves indoors, and the police seek to corral the plague carriers on the beach. Jaime, ever the outsider and always trying to one-up the goyim, decides to demonstrate his moral superiority to his fearful and selfish neighbors by taking two large barrels of water to the plague victims. After the water is consumed, however, the mob slaughters Jaime’s donkey, who pulled the water cart. Jaime cries out, “If you kill my donkey, how will I bring you water tomorrow?” The leader of the mob shouts back, “But we are hungry today!” I can’t think of a better parable of the ultimate futility of helping people with high time preferences [13]. To top it all off, Jaime too comes down with the plague. (Sara manages to nurse him back to health, but her methods fall far afield from Marxist-Leninist orthodoxy.)

4. Jaime, again trying to prove himself, vows to assassinate Chile’s mustachioed Right-wing dictator, Carlos Ibáñez del Campo [14]. Through an absurd plot, Jaime manages to become the groom of the dictator’s prize horse Bucephalus (named after Alexander the Great’s horse, naturally). But Ibáñez’s lordly style and animal-loving misanthropy begin to appeal to Jaime, who after all worships Stalin. When he finally has the opportunity to kill Ibáñez, Jaime’s hands are paralyzed, which leads him to a breakdown.

5. Later, in Santiago, Jaime encounters a National Socialist demonstration (it was a big thing [15] in Chile in the 1930s). Naturally, we would expect a Communist Jew to be opposed to National Socialism, but when the camera returns to Jaime, he is saluting, albeit with a gnarled and paralyzed hand. When one of the Nazis accuses him of mocking their salute, his response is “But we are brothers.” This could refer to the religious awakening Jaime has just had with a humble Pentecostal carpenter. But it also refers to the underlying illiberalism of Jaime’s character.

The Dance of Reality also shows how young Alejandro has to deal with the pain of being a Jew and an outsider. Alejandro had light skin, light hair, and a hooked nose. Thus his darker classmates called him Pinocchio. (In truth, his nose isn’t that big.) His circumcised penis was also cause for mockery. He became bookish and withdrawn, developing interests in literature and religion which eventually led him to become the man he is today.

In the movie, four episodes are particularly telling:

1. On the beach, he encounters a figure dressed as a Hindu sadhu whom he calls “Theosophist.” Theosophist explains the transcendent unity of religions and gives him three religious tokens: the cross, the star and crescent, and the star of David (in the book, he also mentions the Yin and Yang) and urges him to look to the unity beyond them. (Jaime, a militant atheist, throws each in the toilet while ritualistically intoning “God does not exist,” then flushes them.)

2. When the young Alejandro contemplates suicide due to the teasing of his peers, his present-day self appears to him, embraces him, and explains that “the dance of reality,” with all its pleasures and pains, is but a dream of God, and one should embrace the dance, not flee it. This, of course, is Hinduism 101.

3. When Alejandro is beaten up by a local boy because of his Jewishness, his mother asks him if he would like to be rid of it. Alejandro says yes, and his mother magically casts out his Jewishness, rendering him invisible. His mother then demonstrates the efficacy of her spell by walking naked through the bar in which her son was beaten, and nobody notices her.

Now, this episode could be taken just as a parable about Jewish crypsis. But crypsis means hiding one’s differences while remaining a Jew. Alejandro’s crypsis is achieved by magically exorcising Jewishness.

4. The Dance of Reality is not just a portrayal of Jodorowsky’s monstrous father, but it also imagines his redemption from authoritarianism, sadism, social climbing, and Jewishness. After recovering from his breakdown, Jaime becomes the helper of a humble Christian carpenter. Let’s call him Don José, since I did not catch his name. (Poor Don José later drops dead after some particularly strenuous Pentecostal calisthenics.)

When Jaime ends up in a brawl with some Nazis, he repeats the old man’s name again and again. The secret police, thinking Don José is a new force to be reckoned with, arrest and torture Jaime, asking again and again, “Who is Don José?” “I am Don José,” he answers. “You are Don José.” “We are all Don José.” (Compare this to the end of Jodorowsky’s Dune, in which everyone becomes Paul Atreides.)

Jodorowsky is depicting the compassion that one attains through participation in the ultimate Hindu mysteries: the experienced identification of the individual soul with the world soul (atman), and of the world soul with being/God (brahman). Which means that I am Don José and he is me, and if we live with that feeling of unity, we might come to regard it as more important than the superficial things that separate and oppose us.

As a friend once said, when the Jews realize that they are God too, the world will be healed. Jaime Jodorowsky never experienced this salvation, but Alejandro did. I don’t know how Jewish Alejandro Jodorowsky really is, in terms of his genes or his consciousness. One of his grandfathers seems to have been Ukrainian or Russian, and from the looks of his children, he married out. I do not know if he thinks there are positive features of Jewish identity and tradition. He probably does. It would be healthy if he did.

But The Dance of Reality does show evidence of a deeply critical perspective on Jewishness, particularly in its connection with Communism, the most hateful and destructive ideology in history. Jodorowsky also marks an exit, namely religious universalism, that he and many other non-ethnocentric Jews have passed through for more than 2000 years. As the horrors in Gaza provide us with daily reminders of the road not taken, I can feel compassion, respect, and gratitude towards the ones who do take it. They are all Alejandro Jodorowsky.

The Dance of Reality is a remarkable film, by turns bizarre, touching, and hilarious. It is not for children, but I can recommend it heartily to grownups with a taste — or merely a tolerance — for cinematic surrealism.