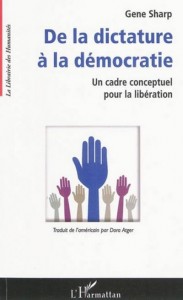 Many of Gene Sharp’s principles of political change are exemplified by the French Identitarian movement, which offers many examples for Americans who wish to repeat their successes. The Identitarian Goal is to create a French ethno-state. Their Grand Strategy is to use a non-violent metapolitical cadre to move the public discourse and political will in that direction.

Identitarianism represents a clean break from Jacobin/Conservative Nationalism, imperialism, and colonialism; they are a Right that is no longer tied down by attachment to the Catholic Church, the French counter-revolution, or the economic interests of the bourgeoisie; nor are they handicapped by the legacy of World War II, the skinhead subculture, or any of the other “guilt by association” tropes.

This is not explicitly stated by the group as far as I am aware, but they clearly draw from the ideas put forward by the Nouvelle Droite think tank GRECE and the journal Eléments, which are ideological predecessors of the Identitaires.

In 2004 the group RESF (Education Without Borders Network) formed to promote amnesty for illegal immigrants and end the separation of families whose members had different immigration status. Dozens of groups of ethnomasochists all across France held public events which were given positive coverage by allies in the media. People took part to show how big their hearts were.

Just as a young rapper seeking to make a name for himself begins by starting a feud with a famous rapper, the Identitaires began by taking on this other small and young but notable group.

A realistic Strategy was developed to build a campaign that weakened a force for invasion and educated the public about the fact that the policies RESF proposes and supports are more sinister than helping children in a difficult situation.

Then it was a question of tactics. One of the unwritten rules of media coverage is that no matter the disparity in size between a protest and counter-protest, both will get mentioned. This was the case in Lyons, where  fewer than 20 Identitaires faced down hundreds of RESF protesters. And the best part was, no matter how the channel cut the clip they still showed the message “RESF Negriers” which is a nasty word for slave traders.

The protesters did not give the media images of drunkenness, violence, Roman Salutes, or stupid commentary (all of which would work contrary to the Grand Strategy and the Strategy).

The Third Way message spoke for itself and certainly crossed the wires in the heads of some socialists. This message was spread further by graffiti, both using stencils and free writing.

Like so many of the movements set in motion by the System, the RESF began with a bang and then was kept alive by a pilot light. The protest in Lyons probably consisted mainly of teachers who were convinced to go by their unions and colleagues. Most clearly lost interest. With fewer supporters trying to occupy a public space, they turned to “Circles of Silence” as a protest Method. This is the kind of fun that only a Puritan could enjoy.

The response was obvious: “Circles of Noise.” This was really quite easy. Such events can be trolled by as few as three activists (including a cameraman) as in Bordeaux in December 2008:

These 60-year-old ethnomasochists aren’t interested in dealing with loud youths lecturing them or pounding drums in their ears.

However, once everyone knows these are not just random pranksters but politically motivated activists it is possible to have even more fun with it. My favorite of all these events took place in Cannes in October, 2011:

Even though it is silly and fun, it does not break any of the rules of the Grand Strategy. Even the tourists found them irresistible.

Also, these interventions are usually quick enough to avoid arrest. Unfortunately it is not possible to make this a regular event because if the police can predict these actions they will be ready to arrest the Identitaires. Charges might include holding an unlicensed parade, disturbing the peace, inciting a riot, or propagation of hatred.

(Roman Bernard of Radix recently spoke to Meridien Zero on the subject of Les Dissidences Américaines [2] stating that the 1st and 2nd amendments may in fact have been a hindrance to activists in America. This is an object lesson in how legal constrictions can create discipline and creativity.)

The mayor of a small town, wishing to get on the ethnomasochist bandwagon, spent public funds to build a “Wall of the Expelled.” He then invited RESF to celebrate its unveiling. As you will see in this news broadcast, about 15 Identitaires came to the event to counter-protest the inauguration:

As it turned out, the mayor had not consulted the city council on creating the mural. The prefect of the district took the mayor to court for misuse of funds and having the government take sides in an ongoing public debate. The judge found against the mayor. Early one morning, the Identitarians came back and repainted the wall:

The Identitaires did not break the law in this case, but jumped at the opportunity to make a direct action propaganda victory. Had the case not been won, the wall would have been restored and the group prosecuted. Had they not repainted the wall, the pro-immigration message would have remained there until all of the routes of appeal were finished. The message left at the end by the Identitaires was “Mr. Prefect, It’s done.”

The RESF continues, but their Circles of Silence have become much rarer and often don’t attract enough people to make a circle. The Socialist government has not passed the laws that the RESF has campaigned for, and, despite L’Affaire Léonarda, it expels illegal foreigners at a higher rate than Sarkozy’s government.

The Identitarians can take credit for the diminution of RESF events but not necessarily for the inaction of the government. Perhaps most importantly, these acts of rebellion against the System led to growth in Identitarian membership and support all over France, which made possible the larger actions that have taken place since then.

A close look at the video of the counter-protests of the “Wall of the Expelled” reveal something interesting about the group. Many of those present were over 40. The Identitarians who took over the roofs of the Poitiers Mosque and the Socialist Party headquarters were under 30, many under 25. Once they had attracted a younger cadre, the first movers in these groups were wise and humble enough to empower them and put them out in front of the local groups.

The beauty of thinking through the model above is that it makes this process easier. If the Goals and Grand Strategy are well-defined then Tactics and Methods clearly fall within or out of bounds. Strategic Campaigns should still be largely devised centrally, but Tactics and Methods can be fully outsourced to well-trained and disciplined cadres.

It is at the local level that the decision to have a 3-man “Circle of Noise” or a 20-person “Circle of Noise” can best be decided. It is at the local level where it is decided to obscure faces or to leave some clear. Decentralized groups can also protect against the damage of infiltration and the risk of a bad actor in one city ruining the group’s reputation nationally.

Locals should give feedback about recruiting successes and shortcomings. Adjustments can be coordinated between the center and the local cadres. This is perhaps more important in the US where value systems between regional cultures are even more at odds.

I should point out that I am not an Identitarian, so the Grand Strategy I set out above is my view and does not imply a schism or rebellion within the group.

In a previous article, “2013: A Dark Year Before the Dawn [3],” I referred disparagingly to the explicit participation of Identitarians in the anti-Gay Marriage rallies. In the article I made the argument that this is out of step with the pool of White Youths we hope to recruit and represent. In the context of this article, that is clearly a Strategic Campaign that works against aspects of the Grand Strategy, specifically being no longer tied down by attachment to the Catholic Church and the French counter-revolution.

Participation by cadre members should not be disallowed, but for a group leader to participate, or for an entire group to explicitly to participate, is problematic. The sight of millions of people marching in the street proved irresistible to some leaders, particularly the most demagogic of them (though I don’t wish to name names).

This is a slippery slope, as some Identitarians are even speaking against abortion, which is getting on the wrong side of an 80/20 issue in France, working against the Grand Strategy, ruining the reputation of the movement as a truly new phenomenon rather than repackaged Pétainisme, and increasing the distance from our Goal. This kind of short-sighted demagogy will only hasten the destruction of our people.

That being said, a distance is quietly emerging between the movement and the men who insist on going off the rails, and the Identitaires are getting more focused on the core issues of our generation and moving toward the Goals necessary to preserve our race and culture.

Part 4 of this series will conclude with a look at Gene Sharp’s views on “Applying Political Defiance,” “Disintegrating the Dictatorship,” and “Laying the Groundwork for [the Ethnostate].”