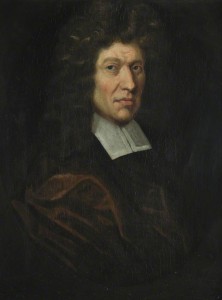 The following text completes my notes on chapter 3 of Jan Assmann’s Moses the Egyptian [4].

Although chapter 3 of Moses the Egyptian is entitled “Before the Law: John Spencer as Egyptologist,” the last quarter of the chapter is devoted to Ralph Cudworth (1617–1688), one of Spencer’s colleagues at Cambridge and a leading member of the Cambridge Platonists.

According to Acts 7:22, “Moses was educated in all the wisdom of the Egyptians.” But what was this wisdom? Assmann suggests that Spencer’s reconstruction of ancient Egyptian religion could focus on public religious rituals, as opposed to “arcane theology,” because Cudworth had already published a plausible reconstruction of this theology in his True Intellectual System of the Universe, which had appeared in 1678.

Cudworth’s aim was the refutation of atheism and materialism. According to Assmann, Cudworth’s target is the pantheism of Baruch Spinoza, although Assmann admits that Cudworth does not mention Spinoza’s name (p. 80). Assmann’s claim seems unlikely though, since Spinoza’s Ethics, which presents his pantheism, was published in 1677, only one year before the publication of the True Intellectual System of the Universe, which is a long and complex work of more than 1,500 pages, the genesis of which surely predated the publication of the Ethics.

(Scandalously, the True Intellectual System of the Universe is not available in any modern editions. If there is a scholar out there who would like to create such an edition, please contact me. Such a book is not right for Counter-Currents, of course, but I have contacts in the publishing world and would love to help bring Cudworth back into print.)

In the Ethics, Spinoza identifies God and nature, claiming that the terms are interchangeable (“God or nature” — deus sive natura). The claim that God is nature can be interpreted as divinizing nature or profaning God. It certainly denies the existence of the transcendent Biblical creator. Although both Christians and atheists interpreted Spinoza’s pantheism as simply a disguised form of atheistic materialism, Spinoza denied that he regarded God/nature as equivalent to matter, but rather claimed that God/nature is simply “substance” — that which exists independently — and matter is just one mode of substance.

Particularly in 18th-century Germany, Spinoza was read as divinizing nature, not as materializing God by men like Goethe, who had genuine religious feeling unfettered by Biblical orthodoxy. On this kind of reading, Spinozism is broadly consistent with Cudworth’s own views.

According to Assmann, Cudworth’s thesis is that the “True Intellectual System of the Universe” is a “primitive monotheism, common to all religions and philosophies, including atheism itself” (p. 81). Cudworth supports this claim through exhaustive quotations from classical sources. Cudworth wishes to show that the idea of one supreme God is entirely natural, not the product of idiosyncratic fancy or pious fraud.

Cudworth distinguishes between “unmade and self-existent gods” — Spinoza called the unmade and self-existent “substance” and identified it with with God/nature — and “native and mortal gods” — i.e., gods which are relative to particular societies and which have the status of higher-ordered created and finite beings. Cudworth claims that no ancient people ever claimed that there is a plurality of “unmade and self-existent” gods. Instead, they believed that there is only one unmade and self-existent god, who creates all beings — including “native and mortal gods.” Cudworth argues that this is true of late Greek polytheism (Hesiod to Julian), the Sibylline oracles, Zoroastrianism, the Chaldaen oracles, and Orphism. (Cudworth does allow for “ditheism” or dualism, e.g., Marcionism and Manicheanism, which posit two ultimate principles, one good, one evil — evil not being derivable from good.) Cudworth sums up his thesis by claiming that “the generality of Greekish Pagans acknowledged One Universal and All-comprehending Deity, One that was All.”

Cudworth devotes about 50 pages of the True Intellectual System of the Universe to the Egyptians. He distinguishes between two Egyptian theologies, the “Vulgar and Fabulous” and the “Arcane and Recondite.” The vulgar and fabulous theology is the popular religion of the masses, which centers around the cult of native and created gods, whereas the arcane and recondite theology is an esoteric teaching “concealed from the Vulgar and communicated only to the Kings, and such Priests and others as were thought capable thereof” (quoted on p. 82).

Cudworth establishes this distinction with quotes from:

According to Cudworth, the Egyptians made their arcane theology public but kept it hidden by using allegories and hieroglyphics. Cudworth asserts that the arcane theology of the ancient Egyptians is the doctrine of a supreme deity who is both one and all.

First is the claim of the neo-Platonist Porphyry (c. 234–c. 305 CE) that the arcane theology of the Egyptians was the worship of the sun and planets as material beings. Cudworth refutes this by appealing to the authority of the neo-Platonist Iamblichus (245–c. 325 CE), but the idea of the deification of the material sun and planetary bodies does call to mind Akhnaton’s solar monotheism, which raises the intriguing possibility that Akhnaton’s religious innovation was simply the attempt to make an esoteric teaching exoteric. (We will revisit this theme in later notes.)

Second is the claim that the Egyptians were true polytheists, meaning that they believed in a plurality of uncreated and independent gods. To dispute this claim, Cudworth uses the Corpus Hermeticum to argue that “Hermes Trismegist or the Egyptian Priests, in their Arcane and True Theology, really acknowledged One Supreme and Universal Numen” (p. 85). As mentioned in my last set of notes, Cudworth accepts the argument put forth by Isaac Casaubon (1559–1614) that the Hermetica are products of late antiquity. But he argues that they still contain genuine Egyptian wisdom because they were written “before the Egyptian Paganism and their Succession of Priests were yet extinct” (p. 85).

Cudworth also finds confirmation of this thesis from a number of Greek and Roman sources from late antiquity:

Cudworth’s conclusion is that for the Egyptians, Amun was “not only the name of the Supreme Deity, but also of such a one that was Hidden, Invisible and Incorporeal” (p. 86).

Cudworth connects the hidden god to the so-called “veiled image of Sais” spoken of by Plutarch and Proclus (412–April 17, 485 CE). The city of Sais in the Nile delta was the cult center of the goddess Neith since the pre-dynastic period. In the 26th dynasty (c. 685–525 BCE), when classical Greeks first became widely familiar with Egypt, Sais was the capital. Neith was just a local name of the goddess, thus she was frequently identified with Isis. The goddess could, in turn, stand for the divine as a whole, especially the divine in its hidden and mysterious aspect. According to Plutarch, the temple of Neith bore the inscription, “I am all that Hath been, Is, and Shall be, and my Peplum or Veil, no mortal hath ever yet uncovered” (p. 86). On Cudworth’s reading:

The Saitic inscription thus clarifies the relationship of the One and All: the All refers to the finite, manifest world. The One refers to the hidden, infinite source from which the finite world arises. The One pervades the All like the soul pervades the body in all its parts yet remains one all the while.

According to Assmann, only after having used Greco-Roman sources to support the idea that the arcane theology of the Egyptians is “Hen kai Pan” does Cudworth then turn to the Corpus Hermeticum, assembling 23 passages

. . . where this idea of the One-and-All is expounded with great clarity and explicitness. He quotes these passages both in their original Latin or Greek and in his beautiful translation. The effect of this presentation of accumulated pantheistic manifestos on a reader who has followed him so far is simply overwhelming. “All the powers that are in me, praise the One and the All.” It is small wonder that these radiant pages continued to illuminate the subject for more than a century. (p. 88)

Assmann’s enthusiasm for these ideas, like Cudworth’s, is clearly more than just scholarly! He evinces real spiritual feeling.

Cudworth also cites a Roman inscription on an altar to Isis: “To you, one who is all, O goddess Isis” (p. 88). Regarding Cudworth’s discussion of Serapis, the syncretic combination of Osiris and the Apis Bull, who was widely honored in late antiquity, Assmann claims that the pantheistic liturgies of Serapis incorporate language found in Egyptian texts from as early as the 13th-century BCE (p. 89). (Beyond that, Serapis was not just a creation of the Ptolemies. There is evidence of his existence before their reign.)

The chapter concludes with Assmann, one of the leading Egyptologists of our time, claiming that Cudworth’s “rehabilitation” of the authenticity of the Hermetic tradition is supported by modern Egyptology: “The hieroglyphic texts confirm Cudworth’s intutions in every way he could have desired” (p. 90).

First, Assmann refers to the Hen kai Pan teaching as “pantheism” as well as his preferred term “cosmotheism.” “Pantheism” is derived from pan (all) and theos (god) and means the identification of god with the whole of nature. A more adequate term, of course, would be “henkaipantheism” since god is both “one and all,” but there is no such term. Another term, “panentheism” is a better fit for Egyptian theology, since it captures both the identity of the divine with nature and its transcendence. (The term panentheism actually looks like it contains “hen” but the “en” instead means “in,” hence “all in God” — and God in all, for that matter.)

Second, Assmann quotes Bishop George Berkeley’s remarks on Egyptian theology. Following Cudworth, Berkeley accepts that the Hermetic tradition conveys genuine Egyptian teachings. He also identifies the All (pan) with Isis and “natura naturata” (nature as causally conditioned manifestation) and the One (hen) with Osiris and “natura naturans” (nature as causally active principle). The distinction between natura naturata and natura naturans comes from Spinoza’s Ethics. If for Spinoza, God and nature are interchangeable, and nature has two aspects, natura naturata (All) and natura naturans (One), then for Spinoza God is All and One. Thus it is easy to see how Hen kai Pan became the watchword of both Spinozism and Hermeticism in the 18th-century, which is the subject of Assmann’s next chapter.