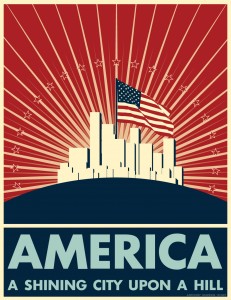 The American pretense of forming a new and uncorrupted world was tolerable for others as long as it remained associated with isolationist policies. A global line dividing the world in a binary manner in terms of good and evil is a line based on moral values. When it is not strictly limited to defense and self-isolation, it becomes a permanent political provocation to the other side of the planet.

This is not a simple problem of logical consequence or pure conceptual logic, nor, moreover, a problem of convenience or expediency or a theme of legal discussion on the question of whether the Monroe Doctrine is a legal principle or a political maxim. The question posed is actually a political dilemma that nobody, neither the one who draws the line nor the rest of the world, can escape.

A self-isolation line becomes the exact opposite the moment one makes it a line of discrimination or disqualification from the rest of the world. The reason being that the international legal neutrality that corresponds to this line of self-isolation is European international law in the 18th and 19th centuries.

When absolute neutrality, which is essential to self-isolation, is faulty, isolationism becomes a principle of unlimited intervention that embraces the entire world, without distinction. The government of the United States then presumes to judge the whole Earth and assumes the right to interfere in the affairs of all peoples and all spaces. The defensive attitude characteristic of self-isolation transforms itself in a way that fully reveals its internal contradictions, in an indefinitely extended pan-interventionism, without any spatial limitation.