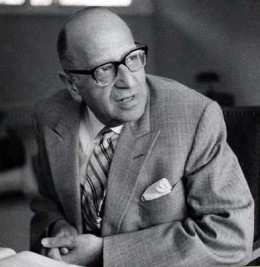 Max Horkheimer died 41 years ago today. Director of the Institute of Social Research from 1930 till 1953, Horkheimer was a leader of the Frankfurt School, a group that became identified with Critical Theory, a wholly speculative concoction blending Marxism and Freudian psychoanalysis.

Horkheimer was born into a conservative, wealthy family of orthodox Jews. His father, Moritz, was a prosperous businessman, owning several textile factories; he expected his son to succeed him at the helm, and from 1910 prepared Max for a career in business. This, however, was not to be: Max met Friedrich Pollock at a dance soon after, and the two struck a friendship. Pollock had been brought up by a father who had turned away from Judaism, so he was not in any way traditional. In his history of the Frankfurt School, Rolf Wiggerhaus tells that this friendship gave an impetus towards Max’s ’emancipation’ from his bourgeois, conservative background. With Pollock he read

Ibsen, Strindberg, and Zola—naturalist critics of bourgeois society; . . . Tolstoy and Koprotkin—social revolutionaries who advocated a form of life marked by asceticism and universal love; . . . Schopenhauer’s Aphorisms on the Wisdom of Life and Spinoza’s Ethics, . . . and Franz Pfemfert’s Aktion, which was a forum of literary opposition to the war and to the bourgeois world of pre-war Europe, marked by its editor’s radical political views.[1]

In time, he rejected a career in business, and by 1924, he and Pollock were described as “communists.”[2]

Max began by studying psychology, but, as he prepared his doctoral thesis, a very similar one was published elsewhere, frustrating his efforts. As a result, he turned to philosophy, and completed his Habilitation within this discipline.

The work of Horkheimer’s group was pseudoscientific. It sought, among other things, to understand the “authoritarian personality,” and in 1950 it published an eponymous “study,” led by his good friend and colleague, Theodor Adorno, a man whose thinking was nearly identical to his own. Typically, the Frankfurt School’s work was tendentious and rife with double standards. For example, it completely ignored Left-wing authoritarianism (even though most of Asia and half of Europe was in the grip of brutal communist regimes, with death tolls already in the tens of millions), and focused only on Right-wing authoritarianism, which it treated as a psychiatric disorder. Amazingly, it is still taken seriously by many academics today, who feel no moral difficulty at their continued support for a murderous ideology. The group’s conclusions, however, were always strained and counter-intuitive, and not adequately supported by empirical evidence.

Indeed, the group was very hostile to empiricism and positivistic science, and this is evident in Horkheimer’s 1947 book, The Dialectic of Enlightenment, co-authored with Adorno. The tone is abstract and assertional, with no effort made to substantiate its claims. As with Adorno et al’s The Authoritarian Personality, this work is taken seriously by modern academics, and appears in the curricular reading lists of Western universities.

Because Critical Theory gained support from academics throughout the Western world, Horkheimer’s group ended up causing harm on a scale that is difficult to quantify. The aim of Critical Theory was to subject the whole of liberal Western society to a radical critique—from the Left. Recognizing that classical Marxism was ill-equipped for the task, since it focused exclusively on a putative opposition between capitalism and the proletariat, they set about developing a new framework. The work of Horkheimer’s group enabled them to achieve an unlimited expansion of oppressed groups, which now included victims of racism, sexism, homophobia, anti-Semitism, and on and on. This became front and center of the New Left project, whose “father,” Herbert Marcuse, unsurprisingly came out of the Frankfurt School.

The essence of the Marxian critique of liberalism is that the latter failed to deliver on its promise of equality: through capitalism, liberal societies created and perpetuated hierarchies. Thus, Marxism focused on equality. But this resulted in tyranny, mass murder, and poverty. Because it was obviously oppressive, it could not defeat Western liberalism, which had, by contrast, produced safe, wealthy, attractive societies. In fact, communist theorist Antonio Gramsci was forced to think about alternative ways of imposing communism in Western democracies because all attempted communist revolutions had failed in the West. By contrast, although it also focused on equality, the New Left was ostensibly emancipatory—a wolf in sheep’s clothing—and mounted a much more successful challenge. Liberalism was not overthrown, but it was permanently altered. Because, as does the Left in general, it holds equality as one of its fundamental values, it could not oppose calls for greater equality on principle; it could, however, accommodate. Liberalism thus shifted its emphasis, away from individual liberty, and towards unbounded equality. It resulted in a Hegelian synthesis. Horkheimer’s group must, therefore, be seen as the agent, or one of the key agents, that made this transition possible. Their tenebrous theories became street politics and then established ideology.

On the surface, this may seem like a good thing to many. And there certainly was scope for reform and more enlightened attitudes in some areas—no reasonable person would deny it. But when we analyse the situation more deeply, we find that boundless equality—this particular approach to reform—has not created a more just and harmonious society, but rather a sublimated war of all against all, with identity politics, gender politics, class politics, and racial politics in a permanent confrontational state, constantly irritated by a sense of grievance and historical injustice. Similarly, the shift of emphasis from the liberal equality of opportunity to the Marxian equality of outcome has meant that in the fight against ‘privilege’ the attendant policies have not eliminated it, but simply transferred it from one class of citizen to another: different ability means that the more able must be penalized in order to make way for the less able, who then become a privileged class with a sense of entitlement as they receive undeserved rewards. Worse still, we have even seen reports of science departments in universities being defunded, scaled down, or closed down altogether as lavishly funded equality and diversity departments are launched, with the salary of a single equality officer being sufficient to pay for two cancer researchers. The pursuit of equality of outcome, therefore, not only privileges the undeserving, but also causes pain, suffering, and even death. Relationships between the sexes? Instead of more happy marriages, we now have more divorce, broken homes, gender antagonism, and the war of the sexes. How ironic that Horkheimer was born on Valentine’s Day. We could go on. The material costs have been incalculable. Social costs even more so.

According to Wiggerhaus, Horkheimer’s main argument was that those living in misery had a right to material egoism. While Kevin MacDonald notes that Horkheimer eventually became reconciled with his heritage, embracing once again Jewish metaphysics, ultimately, one cannot escape the conclusion that the anti-bourgeois crusade was a sublimated rebellion against his father. Rebellion against parental authority is a theme in Kerry Bolton’s The Psychotic Left, where he highlights it as a psychological trait of militant egalitarians. This The Authoritarian Personality regarded as healthy. Yet, Horkheimer’s visage, particularly in later life, bears the stigmata of inner conflict.

Thus, Max Horkheimer is not someone we ought to be remembering. He is someone we ought to be forgetting. If Dante’s Inferno paints an accurate map of where evil-doers go in the afterlife, Horkheimer’s place is in the malebolge, along with the panderers and seducers, the flatterers, the simonists, the soothsayers, the grafters, the hypocrites, the thieves, the false counselors, the sowers of discord, and the counterfeiters and falsifiers. His life was all too long, so we must be grateful death finally stopped him from causing still more harm. As for his legacy: it will do the most service by falling into obscurity, wherefrom it can do good as an an object of refutation.