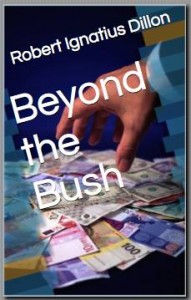 Robert Ignatius Dillon
Beyond the Bush: A Hopeless Satire [2]

Beyond the Bush is the third release from Ann Sterzinger’s Hopeless Books, and the first not from her own pen. Like Sterzinger’s own The Talkative Corpse [3][1] it reveals its Chicago origins by the frequent use of various derivatives of ‘jag-off’, and one might be tempted to christen it part of a ‘jag off lit’ movement, did it not sound so entirely like I was dismissing it as desultory and self-indulgent.

Indeed, this is a slight work — we’re obviously not talking Imperium here, but not even Confederacy of Dunces, despite the author sharing a name with Ignatius Reilly. But it’s short and cheap and amusing enough to invest an afternoon in.

But first, however, the reader has to survive what is usually the kiss of death for a book, especially what is apparently a first novel — the long, dull prologue.

See, what Dillon seems to be trying to do is re-create the “too-hip to believe in but aren’t they fun” conspiracy humor of Robert Shea and Robert Anton Wilson’s ’70s Illuminatus! Trilogy, [4] but updated with some post-Wilson genetic paranoia courtesy of Philip K. Dick’s later, equally vast Valis Trilogy [5],[2] and perversely boiled down to less than 200 pages — for the attention spans of today’s Twitter readers?

The prologue, like the Blazes Boylan section of Ulysses, is really an attempt to introduce his paranoiac themes — James Bond, “23,” etc. — as if they were musical materials in an overture, leaving the reader to appreciate their reappearance and working out in the main text.

The prologue also establishes the writing style, appropriate for the theme and variations method — short sentences, low on descriptive prose, heavy on dialogue and stage directions; at best, punchy, at worst, monotonous. (Kindle readers are advised to switch to a smaller font, so as to give each sentence its own line, lest the book seem like a failed attempt to write a contemporary blank verse comedy).

It’s here that the intention and audience clash; not only are modern readers impatient with such long-term methods, Dillon has chosen — no doubt for personal reasons — to highlight the least relevant Illuminatus! theme: James Bond as a rogue paranoid. Although the recent 50th anniversary of the movie franchise, and the Daniel Craig reboot, have shown Bond to still have some cultural importance, it hardly has the same punch it did in the ’60s and ’70s. Dillon’s long discourse on the various Bonds has, to reverse chronology, the flavor of a Tolkien nerd’s dissertation on some aspect of the canon in the ’60s, before the movies made the books cool.[3]

Even on its own merits, it’s not a very interesting use of Bond, with its stale Moore vs. Connery juxtapositions.[4] Given Dillon’s interests in parody, the impact of different actors in the same role, or the same actors in different roles, etc., he might have found more fertile, and fresher, material by bringing in the Bond ripoffs of the period; for example, the Italian O.K. Connery [6] (a.k.a. Operation Kid Brother, Operation Double 007 and Secret Agent 00) which uses (in many senses of the word) Sean’s brother Neil to play 007’s hypnotist/plastic surgeon brother, as well as placing known Bond actors in similar roles, both good guys (Bernard Lee, Lois Maxwell) and bad guys (Adolpho Celli, Daniela Bianchi, and the ubiquitous Anthony Dawson). It’s a far more promising doubling than Dillon’s take on Never Say Never Again, and given his discussion of John Barry’s role in “saving” Bond though his soundtrack music, one would also like to hear Dillon deal with a production that, half-assed as it is, features what is surely the best Bond theme song, produced by no less than Ennio Morricone himself.[5]

The plot, such as it is, is just enough to assemble a random bunch of names and eventually meet them all up in the Oval Office on January 22, 2008. At exactly the halfway mark, according to my kindle, the story takes a sort of magic realist turn, though not much is made of it. Although Obama — or his clone — gets his share of slagging, most of the bad guys are familiar creatures of the Right, such as the eponymous Bushes and Dick Cheney; the humor is not so much alt-Right as post-political (“wised-up”) anarchist, like Shea and Wilson, or indeed most good comedy; after all, there are so many tempting targets, aren’t there?

As the last chapters arrive, the Bond themes from the prologue begin to reappear, revealing that the novel (is it a novel?) not only has the musical structure of a sonata — theme and variations — but is cyclical as well.

This characteristic – a structure both cyclical (if not cynical) and theme and variations — might remind one of Furtwängler’s Second Symphony.[6] Such a comparison could be considered both perverse — apart from being in a different medium, the work is hardly slight, almost 90 minutes in length[7] — and unfair, since the symphony is universally judged to be an eclectic failure that only demonstrated, rather than refuted, the “death of tonality.” However, the conductor’s protégé, Daniel Barenboim, once described the derivative nature of the material by saying that when listening, one must wear a hat, so as to doff it as one by one Brahms, Wagner, Liszt, etc. come strolling along.[8]

In a similar way, one of Dillon’s comic techniques is the random introduction of pop culture figures into the narrative. The reviewer’s problem here is that I can’t give any examples, as the effect depends on surprise, and your mileage may vary anyway, but trust me, you’ll find a least a couple to be laugh out loud funny, so be careful where you’re reading this.

Does the alt-Right have beach lit? Well, it does now. Enjoy!

2. Actually, most of the material comes from Blade Runner, the movie, though the character of Fat Guy is no doubt a nod to Dick’s legendarily unreliable narrator of Valis, Horselover Fat.

3. Though it must be admitted that the National Lampoon did produce parodies of both Bond (Alligator) and LOTR (Bored of the Rings) in the ’60s. See That’s Not Funny, That’s Sick: The National Lampoon and the Comedy Insurgents Who Captured the Mainstream by Ellin Stein (Norton, 2013), here [7] and here [8]. However, as a respectable young adult, although I read both parodies, I also read all the Bond books, while Bored remained by only exposure to LOTR until the movies. Could anyone imagine Kennedy, “youthful” as he was projected to be, admitting to reading Tolkien as he did to reading Bond?

4. And I say this as someone who himself frequently re-reads, and even cites, Kingsley Amis’s James Bond Dossier (London: Jonathan Cape, 1965) as not only an excellent critical work but a model for serious study of pop or genre works.

5. Oddly enough, Joel Hodgson, in his introduction to the MST3K DVD version (Vol. XXV), hits on exactly what differentiates the Bond era of Shea and Wilson (who produced Illuminatus! whilst working for Playboy, no less) from our own day: the Bond films showed “us” (Boomers) what we could look forward to as adults: alcohol, cigarettes, cars, and chicks.

7. I first encountered it, and Furtwängler, in Colin Wilson’s The Philosopher’s Stone (1971, republished by Valancourt in 2013), where a character listens to such elephantine works precisely to enjoy the mental challenge of holding a musical thought together for great lengths of time.

8. Barenboim has been a tireless advocate of the work, even getting his Chicago Symphony to record it –and even release it on two discs (Teldec, 2002), with plenty of blank space, like Johnny Winter’s Second Winter. The irony is sweet, as the Chicago Symphony had rescinded Furtwängler’s appointment as conductor after the War due to the usual Judaic cries of “war criminal”; as an Israeli, Barenboim no doubt had sufficient moral capital to get his way.