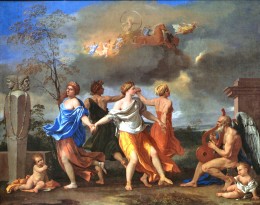 Nicolas Poussin, A Dance to the Music of Time (Dance of Human Life), 1639

The circle can symbolize perfection and eternity. It can also symbolize identity, since every circle has an inside and outside, an “us” and a “them.” Of course every line divides, but the circle turns back upon itself and “eternalizes” itself, for a circle has no beginning and end. But every vital identity seeks to eternalize itself as well.

Folk customs and culture abound in circular motifs and imagery: the great cycle of life was seen as a sacred circle; dancing in a circle, holding hands in a circle around a sacred tree or a maypole; megalithic circles of stone such as Stonehenge; the Tibetan monk’s use of circular mandalas;[1] meditation as a process of centering oneself; the domes of basilicas, the Celtic cross, Gothic stained glass cathedral windows, etc.

The Dance and the Folk

We get the word “carol” from the Old French word Carole, which in turn comes from the Latin Choraula, which signifies a circle dance. The circle dance is a traditional form of dancing that creates a sacred circle – one feels oneself a part of a continuity, one feels oneself slip away into the syncretized community, and yet one is fully engaged in the process (Henri Matisse’s Dance 1, 1909, with its flowing sense of musical rhythm really captures the essence of this movement).

Certain variations of the Tarantella — a traditional Italian folk dance, exemplify the symbolic meaning of the circle and the circle dance – are still danced today in traditional garb. These variations of the dance begin with men and women facing each other in perpendicular formation. Tthe sexes then draw together and intersperse, each woman with a man, locking arms. They then form a circle and move outward, away or centrifugally from the center. The women are the first to move together towards the center, as if defended from the outside world by the men who remain on the periphery. The men then move inward and duck under the women’s arms as the women move outward. Each group replaces the other and creates a small circle; this movement is repeated three or so times and finds completion again with the men on the periphery and the women on the inside – re-establishing the natural division between the sexes.

The Family and the Folk

The family is a smaller circle. Wedding rings symbolize its potential. The isolated individual point joins to a second to create a third, the first geometric shape: the triangle, whose points can determine the circumference of the circle.

The error of communism and globalism is the attempt to attach the individual to the widest possible circle, while detaching him from the smaller, closer circles of acquaintance to which he is naturally more partial. This is why communism and globalism are hostile to the family, the tribe, integral cultures, and the nation. But they succeed only in hollowing out the insides — the first, primary rings of the tree — leaving only a brittle shell to face the storm.[2]

Czech author Milan Kundera often deals with the folly of mass political movements that seek to destroy organic societies. Like many authors, Kundera really wrote one book many times – specifically The Book of Laughter and Forgetting, whose title and cover art (which shows people involved in a circle dance) typify our discussion perfectly.

Kundera tells us that the Soviets kept their pop stars securely in the cultural firmament, because, like today’s “all singing all dancing crap of the world,” they kept the people laughing and forgetful — which is why when the Soviets invaded Czechoslovakia during the Prague Spring in 1968, 145 Czech historians were fired from the universities, in an attempt to erase the memory of the people.

1. Mandala is a Sanskrit word meaning circle or magic ring.

2. This is why Leftists like Wilhelm Reich, Foucault, and Deleuze and Guattari attacked the family as “the first cell of the fascist society.” Reich, a student of Freudian psychoanalysis, based his critique on the idea of the family as a sexually repressive unit, working in Oedipal pools of incestual and ancestral sublimation.