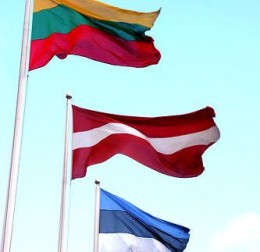 [1]There is an undercurrent moving swiftly through the European continent today, carrying with it a new message of strength, change, and identity. This identitarian movement is clearly growing, exhibiting new, exciting prospects and ideas that have begun to resonate with a population yearning for something, anything, to counter the Left’s stranglehold on everything from how we speak to what we are allowed to think and do.

And it is in the east that so much is happening, bringing a new game plan with entirely different strategies for organization into the mix. What is immensely refreshing to see is European youth rising up, from the western continent to the Baltics and beyond, making their case for self-determination, cultural sovereignty, national relevance, and a common, ethnic Homeland.

In many ways the European Union has become an enormous godsend for the cause, moving its weight around the continent like an uninvited, obnoxious guest imposing morally superior edicts on everyone else. What started as a means to settle trade and business disputes has evolved into a self-absorbed megalomaniac, pushing its members to eliminate borders, take in more Third World immigrants, eradicate cultural hegemony, and even accept same-sex marriage. And that’s just a small sample. There’s more to come. Much more. Brussels has become the new bully, particularly for those smaller countries wary of giant bureaucracies that tend to rule, regulate, and inevitably transform the weaker into something unrecognizable. Western Europe has had no experience with the kind of long-term totalitarianism much of the east has had to endure, and this has had an enormous impact on the regional psyche in the east.

And the psyche is more resilient.

In Europe there are vast differences between the east and west. Those in the east were quick to try and replicate much of what the west had when Moscow lost interest. But it has been the mindset, or psyche, that has endured. The Soviets tried various Russification programs that only had partial success, and now the west uses the allure of consumer economics as a magnet for change. While this magnet still has a huge pull, it is the psyche among many that will inevitably resist complete surrender. Those in the east have more patience, thicker skin, a stronger distrust of centralized authority, keener instincts to methodical management of crises, an internal passion for self-reliance, and a greater appreciation for localized agriculture and land ownership. For years they quietly (in some cases noisily) resisted the Soviets, so the Leftist multicultural imams in Brussels should be easy pushovers.

This discontentment has provided an impetus for resistance. Eastern Europeans sense something slipping away, aware that life after Moscow has resulted in yet more struggle, and in many cases unwanted change. While the west grapples with cultural suicide and self-inflicted demographic destruction, the east sits back, watching the upheaval from a distance and once again contemplating a strategy for its own national interests. For many the west is clearly no longer the affluent big brother to admire and emulate. He is to be feared. And with that fear a new generation of nationalist movements have emerged, boldly elbowing their way to the front of the pack.

And the easterners aren’t at all interested in staying in line or capitulation for the sake of phony, feel-good acquiescence. I once asked several Baltic youth how they would feel if Tallinn, Riga, and Vilnius could, in the future, no longer be majority white cities. They all looked at each other, and then shook their heads. Most answered that it would never happen, and would prefer it didn’t happen. I then said that a lot of Londoners would have probably had the same response 50 years ago. The west might be obsessed with racism and a lack of diversity around every corner, but most in the east are more interested in improving their lot in life and building a better future for their people and their country. Again, this is a different generation, and they have a different understanding of fear. Thankfully many have become aware of the new struggle and have chosen to either join others, or at least keep an open mind to new youth movements that have emerged.

And what all these movements have learned from their elders is that a fresh approach can achieve lasting results. People suddenly get tuned-in. For example, working with the public, that is, making an organization not only political, but somehow socially active can usually result in greater success. The three Baltic states, Lithuania, Latvia, and Estonia, are a case in point, and have made huge strides in nationalist politics, bypassing their western cousins (in many ways) and unleashing a wave of protests, social awareness workshops, and upfront in-your-face street activity at the local level – and always with a positive message. [3]One such eastern organization, the Lithuanian Nationalist Youth Union (LNYU [4]), is no stranger to the effort. The LNYU seeks to maintain “Lithuanian culture, respect for our ancestors, national patriotism, and preservation of the homeland.” The LNYU provides a beacon for young nationalists to come together, and works to cultivate a strong Lithuanian character and nation for future generations. Since its inception in 2001, roughly 2000 young people have played a part.

From their head office in Vilnius, the capital of Lithuania, Mindaugas Sidaravicius (acting chairman), Julius Panka, and Arturas Vileita develop organizational strategies and tasks for the upcoming month and beyond. Their calendar is full of events, carefully mapped out in correlation with other social activities in the country. The primary focus for the moment is the land referendum vote, which will restrict the sale of real estate to outside foreign interests, and ensure greater sovereignty for the Lithuanian people to decide these issues themselves. Nationalists understand that money interests from those with no real stake in the country can lead to greater influence from the EU.

The LNYU played a major role with other nationalist organizations in acquiring 320,000 signatures for the referendum with a 63% approval rating for the measure from the public. This is no easy feat given time constraints and limited funding. And working with other parties, such as the Lithuanian Nationalist Union [5], will hopefully help generate a strong turnout for the referendum vote. The vote was originally planned for May during the EU elections, which was perfect timing. Unfortunately it was delayed by the government until June.

Not only would the referendum change land policy, but it would also lower the number of signatures needed for referendums in the future from 300,000 to 100,000. The required number necessary for a public vote has been a major obstacle for groups like the LNYU, who has also set its sights on making changes in the Lithuanian Constitution a reality. A well-planned referendum is always an excellent tactic against the Left.

Once again a patient, methodical way of doing things can yield big results.

And there are also a number of initiatives at the local level that have given the LNYU positive publicity, such as blood drives, orphanage work, and a summer camp for youth. The political becomes the social. Summer camps are an excellent way to reach a younger audience, “and it gives young people a chance to experience something new,” according to Panka. Dozens of youth go to the camps each year. Teenagers take part in a number of activities, such as creating jewelry with brass, reenactment of Lithuanian sporting events from the ancient past, playing and singing folk music, Baltic language studies, pagan rituals, and hiking through pristine historic areas. Many of these kinds of outreach programs and camps have worked well for other groups in Europe as well, such as the Golden Dawn in Greece.

Opposition to the LNYU and other identitarian movements has been minimal, as is generally the case in many eastern European countries. According to Sidaravicius, the “underground Left in Lithuania has begun to crumble.” This is due to problems internally with the local antifa, and a strong rejection of the European Union in the east by much of the population. And many have simply begun to open up to the message of the New Right. People are taking a different look at what nationalist organizations offer, and have concluded that their interests are simply much more represented by these groups. The Lithuanian press has (predictably) been generally negative, but again, “bad publicity is good publicity,” says Sidaravicius.

The east is rising, pushing aside the weaknesses and politically correct idiocy much of the west has embraced, and instead moving in a new direction for themselves and the future. It is a future that is bright for young nationalists everywhere, who are ready to stand up to their adversaries. Fighting for your people, your history, and your culture is not about hate. It is deeper than that, and this is the greatest asset those in the east possess. Fear becomes strength.

So when a bully hits you, hit him back. And keep hitting until he’s on the ground.