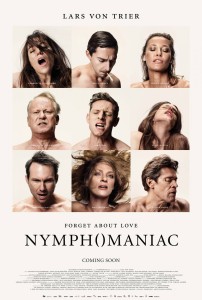 Lars von Trier’s Nymphomaniac: Vol. I and II (2013) is the type of pretentious art-house exhibitionism that begs for conservative condemnation and liberal defense against the prudish “man” — at least upon first inspection. The fundamentalist Islamic Turkish government has recently taken the bait by reacting predictably and banning the film, labeling it, what it is only explicitly and superficially, as “pornography.”[1] But is the recent exposition of sex addiction films such as 2011’s Shame, 2013’s Don Jon, and Nymphomaniac symptomatic of the degeneration of any healthy balanced society?

Nymphomaniac’s protagonist, Joe, is played by three actresses: Charlotte Gainsbourg as the middle-aged incarnation, Stacy Martin as a younger Joe, and Anaya Berg as a ten-year-old Joe. In the end, Joe is left self-pityingly alone, with a ruined marriage, abandoned daughter, and a dangerous career — an overall squandered miserable existence — and she knows it. The film begins near its end, when Joe is found beaten in a dingy alleyway, like a drugged-out victim of a gang rape. And the plot unfolds as she recounts her life of debauchery to an erudite priestly old virgin named Seligman, played by Stellan Skarsgard, who has brought her back to his flat for convalescence and “confession.” Indeed, the story is recounted as a confession, but there is no moral growth, repentance, or redemption.

I skimmed through two reviews of the film, one calling it “feminist” and the other “misogynist,” each with anecdotal evidence to support its claim. Both writers were too confined by their worldviews to see the film as it is. Is the film feminist or misogynist? The answer is: who cares?

For Seligman, Joe is a heroine for breaking the double standard of sexuality — “If she does it she’s a whore, but if he does he’s ‘The Man.’” While the other side of the women’s lib ticket sees in von Trier’s lens male fear of female sexuality — the vaginal passage portrayed as sexualized womb envy, as young Joe fucks ten different men a night to get her kicks, something that not even the most sexually voracious man could accomplish. In this capacity, Joe represents a threat to the hackneyed leftist chant of the “hegemonic patriarchy.” Joe acts as a deified sacred whore of the living breathing “Slutwalk” culture [2].

In today’s polymorphous, perverse, pornographic popular culture, Nymphomaniac fits right in, no lubricant necessary. It’s not art that calls forth idealism or beauty, but neither does our culture at large. Nymphomaniac is intellectually and emotionally challenging, at times disturbing, and ultimately transgressive. The graphic sexuality of the movie, which utilized real “sex doubles,” only reflects the graphic sexuality of our times. We get the art we deserve.

But the work itself is not pornography in the ordinary sense. Yes, the film portrays a lot of sex, and that sex is every bit as debased as pornography. But Nymphomaniac is no more pro-sex than Requiem for a Dream is pro-drug. The purpose of the film is not to get you off. Rather the opposite. It is so depraved and repulsive that it functions as an argument for celibacy.

For example, there is nothing titillating about watching the saggy, paunchy, and menopausal grimacing in orgasm. Nor is the film’s relentless depiction of unfolding tragedies and cathartic emotional outbursts. Uma Thurman’s screaming confrontation with her cheating husband and his paramour, as her children bear witness to the breakdown, is genuinely hard to watch. Likewise Joe’s delirious and incontinent father’s slow, agonizing death in a hospital bed. The breakdown of Joe’s marriage is another of the tragedies that Trier depicts with such relish, especially in his “depression trilogy” (AntiChrist, Melancholia, and Nymphomaniac).[2]

Sexuality was Joe’s means to escape her own existential problems, and hooking up became every bit as addictive as heroin. But Joe refuses to sleep with Seligman at the film’s conclusion. She presumably kills him, but the purity of his virginity, his sacredness in his role as “priest,” and as a man of the higher calling of the mind, is left untainted by her profane nature. By murdering Seligman, Joe keeps the old tribal taboo of the separation of the sacred and profane intact, thereby redeeming the world. This ending — in which Seligman acts completely outside his character, presumably incensed with a mad desire inspired by Joe’s debauched tales — comes off as completely unrealistic and sloppily scripted, but didactic.

While von Trier himself comes off as a snarky art school egomaniac — his production house has dabbled in real “pornography for women,” and he has the word “FUCK” tattooed rebelliously on his knuckles — this self-indulgent P.O.S. actually makes some decent films. Well, films we deserve anyways.

1. Making one Turkish blogger quip, “Las von Trier I wish my country was as free as your mind.”

Therefore, having a “free mind” is equated here with sexual promiscuity (artistic or otherwise) as one “enlightened” bastion of liberalist tolerance; much like having “an open mind” means pretty much the same thing. Or being “reactionary” meant opposing the scientific evolution of society according to Marxist materialism. I mean you don’t want to be a “square,” or a “vanilla” or a “fascist” do you? Often the left, whether militantly political or repugnantly social, conjures up these pejorative distinctions to cripple those who differ from their enlightened perspective.

2. Contrasted with Scorsese’s same-year Hollywood stylized glorification of the Jewish bacchanalia cult of unregulated stock-market manipulation and profiteering in The Wolf of Wall Street (2013), von Trier’s Nymphomaniac comes off as masterful as a Shakespearean tragedy.