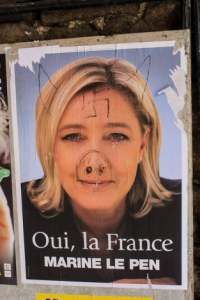 One doesn’t have to look very far in comment sections to find concerns raised about Marine Le Pen being a secret philo-semite or a Conservative Patriot who does not care at all about her race. There was even a commenter who suggested she is now winning because that is “what the Jews want.” My first reaction was to wonder what evidence would be sufficient to these commenters to falsify this claim . . . remembering that non-falsifiable claims are, by definition, articles of faith. Rather than dismiss these commenters as trolls I tried to look for evidence of such collusion or at least assistance and was surprised by what I found.

After the Municipal elections there was an interesting dataset floating around about time given by three channels to candidates of each party. BFM gave more time to the Front National while iTele and LCI gave more time to the center-right UMP and the Socialist Party, respectively. BFM is the only one of these three with Jewish ownership. BFM, which is like Bloomberg or CNBC, also has a stable of Jewish hosts. The other stations mainly have non-Jewish hosts but have Jews as regular guests. One of the subsidiary radio stations of BFM was the one that Robert Menard (profiled in “Taking City Hall [2]”) had his talk show on before running for Mayor. If there is an editorial position coming from the top to allow FN to tell their side of the story, this is in contravention of all of the rest of organized Jewry in France. There is not a single major Jewish organization that has said anything about the FN other than they are naziswhowanttokillsixmillionjews.

Marine Le Pen has reached out to the Israeli government for an official meeting but has been refused. Her retort to an annoying ambush journalist at the time was “they feel like they have too many friends already.” Israeli officials spontaneously reiterated their boycott after the recent election.[1]

A Succession of Setbacks for Zionists and French Jews

The Organized Jewish Community is slowly coming to terms with the fact that their position in the world is eroding, albeit from an incredibly strong one. It seems the strategists in the IDF and Israeli government were among the first to realize this fact. President Obama’s refusal to send (once again) American goyim to die for Israel last September has led to a rethinking of Zionist strategy. For the next three years, at least, the Israelis should not expect any help from the US government beyond that required by the Camp David Peace Accords and mandated by Congress. Even the now Jewish-led CFR has called for a refocus of American interventionism away from the Middle East to East Asia and secondarily to sub-Saharan Africa.

The Israelis have quite brilliantly neutralized the Palestinian leadership by dividing it against itself, but have less stability among neighboring regimes now than at any time in the lifetime of their IDF conscripts. Among those IDF Conscripts there is cultural division and withering élan like never before in the history of the State of Israel. As Yves Bonnet, former Intelligence Officer and Head of the DST (France’s FBI) pointed out in If Hezbollah Was Defeated,

the fighting spirit the Israeli Army had in the 1967 and the 6 Days War has disappeared today. The Israeli army facing Hezbollah sent forces – I wouldn’t want to say mercenaries – but they were private units that contained Druze . . . Ethiopian soldiers, in addition to newcomers to Israel from Russian or Soviet origins. I’m not sure if the Israeli army had the enthusiasm as their fathers and grandfathers to defend the “sacred borders” of their country.[2]

Not to mention this skirmish was the debut for the unit of Orthodox lunatics who were far more eager to murder donkeys than to risk cutting themselves while shaving. The supposed attack which precipitated a number of Jewish protests took place at the train station which services both the worst ghettos around Paris as well as CDG and the Eurostar to London. A Jewish man wearing a kippah had just left a café near the Gare du Nord in the evening when two men “who appeared to be of North African origin” pushed him against a wall, drew a swastika on his chest, and shouted “Death to the Jews.”

He was saved at the last minute by a courageous goy who started shouting at the two men. The two aggressors then ran off into the night never to be caught. This story was given maximum news coverage. The French media rarely report the race of criminals, but this time they were not so timid.

While there is no shortage of anti-Semitic aggression coming from Arabs against Orthodox Jews, this one almost seems too perfect: the defenseless Jew, the swarthy ruffians, the evocation of the Swastika, one “Righteous Among the Nations” who stands up for the poor helpless Jew, and the cowardly Arabs run away at the sound of his voice. It could be the first scene of Spielberg’s next movie.

The alleged victim has remained anonymous, for obvious reasons. Next time they might draw two swastikas on him. It is worth noting that over 50% of Israeli Jews have North African Origins, and it shows. Without Jews who look like Arabs, Mossad would be ineffective. Perhaps it is becoming clear where my line of thinking about the event is going.

The very well-organized series of protest which followed were really a continuation of the protests against Dieudonné at the end of 2013 which first remobilized the Jewish Community of France.

The new Prime Minister, Manuel Valls, who congratulated his riot police while Minister of the Interior after they gassed white, Catholic children at an anti-gay marriage rally, joined Bernard-Henri Lévy at a Jewish protest near Dieudonné’s theater to remind them that “The Jews of France are the Avant Garde of the Republic.” Bernard-Henri Lévy followed him with a bizarre and tortured attempt to explain how Voltaire wasn’t really in favor of absolute liberty of expression, and quotes that indicate that are inaccurate.

On May 26th, the day after the historic election which put the FN in first place, another historically important event occurred. A General in the IDF came to the Ashkenazi Grand Synagogue of Paris to recruit young French Jews into the IDF. There have definitely been Jews who have volunteered in the past (such as Gilad Shalit), but as far as I know there has never been this kind of event.

To quote a liberal Jew who sounded the alarm about this event to the media, “A Jewish marriage or a Bris are not political meetings.” It is doubtful that this is a flagrant act of the over-confident. Rather, it seems like an act of desperation as the IDF seeks to keep its numbers high enough to face down threats from its neighbors.

Finally, while he holds no official power in international relations, Pope Francis does have an impact on public discourse. We are told that while being driven alongside the separation wall during his visit to the West Bank, this sanguine Italo-Argentine jumped out of his car with an irresistible urge to press his forehead against the evil wall. He just happened to be photographed in the exact same pose that EVERY leader in the West has made by the Wailing Wall. [5]There is always a notable minimum on the Left in Europe that whines about the Palestinians. I believe that this gesture marks a changing of tides; as Al Qaeda fades in the distance, strident criticism of Israel’s human rights record will return to the mainstream.

At the end of his Pontificate Benedict XVI hired Fox News and Time journalist Greg Burke as a PR strategist. Perhaps I am a bit cynical, but I wonder if this was in fact a prearranged publicity stunt. Obviously the Vatican is thrilled when the media talks about the separation wall rather than condoms in Africa, let alone the conspiracy to protect and enable child molesters.

I wrote in “Jewish Demographic Destiny” I [6], II [7], and III [8] that I believed the Jews of Israel are in such a bad demographic situation that their intelligence services would consider false flag, soft target jihad in France in order to promote immigration. The rate of Aliyah grew by 70% in the year after the Mohammed Merah Attacks in 2012. The first months of 2014 saw a tripling (!) in the rate of departure for Israel over those same months in 2013.[3]

So the question remains, if there is some kind of arrangement between the FN and the Organized Jewish Community, what is driving the relationship? Furthermore, what do their powerbrokers want: Arab remigration or a higher rate of Aliyah? Since I don’t have a microphone planted in FN headquarters, I can only give my opinion on the matter.

My feeling is that the Zionists are feeling desperate. Whether the FN actually comes to power or only comes near to it, this increases the ethnic and sectarian tension as well as the perception of insecurity among French Jewry, thus continuing the accelerating rate of Aliyah. The Zionists have more to gain from the rise of Marine Le Pen than her marginalization.

Those Jews for whom Zionism is of secondary concern to cultural destruction might not like it, but I think the Zionists are in the driver’s seat of the International Organized Jewish Community at this point. When it comes to the FN, Marine Le Pen, not some mysterious Svengali, is in the driver’s seat.

2. This documentary series produced by Al-Manar, the media wing of Hezbollah, is perhaps the greatest series ever made explaining military tactics. It is available with subtitles. The Bonnet quote occurs in Episode 11, but I highly recommend watching the entire series to White Nationalist activists, though you will probably want to fast forward through all the inspiring montages. http://www.youtube.com/watch?v=GDF8UqfDzSI [10]