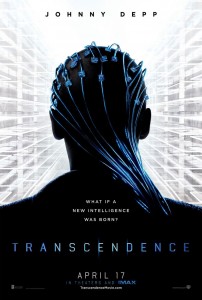 Transcendence marks the directorial debut of Wally Pfister, Christopher Nolan’s cinematographer. Nolan is also the executive producer so the expectation is that this sci-fi project could aspire to the heights reached by Nolan’s Inception [2]. Sadly, it fails to live up to the comparison.

Johnny Depp stars as Dr. Will Caster, a leading researcher in artificial intelligence (AI). His work is opposed by a terrorist group known as RIFT (Revolutionary Independence From Technology) who argue that the creation of self-aware computers will lead to the destruction of humanity, as the newly autonomous machines will choose to subordinate or wipe out their human creators. This point at which AI supersedes humanity is referred to as the singularity, or in Caster’s own religiously inflected term, transcendence. When Caster is shot early on in the film by a member of RIFT it transpires that the bullet contains radioactive material that will shortly kill him. With Caster’s death imminent, his wife, Evelyn, uploads his consciousness to a computer. Once this is done, he immediately asks to be connected to the internet. Ignoring the possibility that this might be the very thing that RIFT have been sensibly warning everyone about, she unwisely complies.

Initially, her faith in her husband (if that is what he still is) is repaid, as Caster is able to quickly create new bio-technologies that can heal the sick. More than this, his patients are not just cured but super-powered so that they can perform feats of great strength. Unfortunately, he also implants something or other into the bodies of those he cures so that they become networked with the virtual doctor and operate as a hive mind. With this super-empowered army at his disposal it appears that Castor is about to achieve world dominance. Belatedly sensing that this might all be going awry, Evelyn agrees to help defeat Caster. She consents to being infected with a computer virus, and persuades him to upload her consciousness so that it can spread throughout the WWW and shut down everything connected to the internet. Thus humanity is saved but only at the expense of reverting to a pre-technological state.

Transcendence contains some interesting ideas, but it never manages to achieve anything greater than the sum of its parts. To a great extent, this is due to the way that Depp’s character manifests his presence after being uploaded. He simply appears on various screens talking to his wife. Depp’s performance is not particularly engaging to begin with, but when he recedes to an image on a screen within the big screen itself it becomes impossible not to describe his performance as flat. Additionally, his wife is a teary and dull character who can’t even be redeemed by the excellent Rebecca Hall who excelled in Nolan’s The Prestige.

But even more of a problem is the difficulty with attempting to parse the concept of an uploaded consciousness. Needless to say, the specific means of uploading a person to a computer are rather skirted over (because it can’t be done). But this wouldn’t necessarily hamper the film if it was presented better. Recall HAL from Kubrick’s 2001: A Space Odyssey. Kubrick recruited Marvin Minsky, a leading researcher on AI in the 1960s, as an advisor on 2001. Kubrick’s depiction of HAL in the movie in 1969 represents the best bet of where AI would be at the turn of the millennium, based on the knowledge of the time. As such, HAL is a super-computer. His intelligence has been achieved through progressions in computer technology based on faster processing power and increased data capacity. As is evident, such AI computers did not come to pass in 2001, but this is no impediment to enjoying the film. Kubrick treats HAL as intellectually proficient yet there is always a suspicion that his “personality” is a sort of autistic charade. He works as an analogue of the black monolith that appears at the beginning of the film: an inscrutable dark façade behind which who knows what sort of alien machinations are ticking over. He works artistically because he crosses a threshold of plausibility.

The 1960s approach to AI research has now been replaced with a focus on distributed intelligence, and this is reflected in the networked consciousness found in Transcendence. Rather than a computer becoming more and more developed to the point where it somehow magically achieves consciousness, the scenario in Transcendence concerns the replication of a human brain in computer hardware. Whereas in 2001 the development of the HAL 9000 series and its capabilities is discussed in some detail, the uploading of consciousness in Transcendence is simply taken as a given. Apparently, the audience will simply accept that this is a plausible concept. For an ideas sci-fi movie, this is the Achilles heel in Transcendence’s techno future. The oddness of Depp/Caster as the virtual brain in a vat, flickering to life on various screens as he stalks his still-fleshy wife stems from this flawed conceit. On this reckoning, an uploaded human is a less believable character than a super-powered computer.

What this points to at a deeper level is the nature of the hopes and expectations that lie behind the pop cultural evolution of AI ideas. In the late 1960s the AI project seemed to be about creating faster and cleverer machines that could somehow reach a certain tipping point that would allow consciousness to emerge. It was part of the self-confident future that the dawning space age seemed to herald. Now the ambition has become the transference of human consciousness to a network. The shift is significant. Rather than seeking to create a genuinely artificial consciousness, a thinking machine, Transcendence tells us that the real aim is the extension of our own consciousness, our sense of self, beyond death. This is a model of the future predicated on the uneasy fear and misgivings of secular late capitalism and the morbid worries it gives rise to. The real terror lying behind the story told in Transcendence is not that uploaded conscious beings might one day supersede humanity; it is that they might not. In the latter scenario we all die, like in real life.