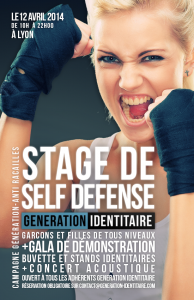 After the most spectacular feat of activism France has seen since the late 1960s, in which Identitarians occupied the roof of the Poitiers Mosque that was still under construction, this movement has been subject to persecution, infiltration, and defamation. However, the idea and the movement cannot be stopped by the traitors and occupiers within the government. European identity will not slip quietly into the night; the rebirth is already beginning.

The Identitarians began a concerted effort of making “Anti-White Racism” part of mainstream discourse beginning in late 2011. Jean-François Copé, the Jewish leader of the major center-right party began a polemic around this phrase in September 2012 (the best month for new marketing campaigns) as he desperately tried to win back the support of those who abandoned Sarkozy to vote for Marine Le Pen in the last Presidential Election. Having legitimized the use of this phrase, the national media began a month long discussion of the topic, thus moving the concept from the margins into acceptability.

Identitarians are keeping the concept in the forefront. The most striking way was by hanging silhouettes just before dawn outside of the City Hall of Toulouse for each of those who died at the hands of non-white criminals in their city. A stark reminder of the costs of racially mixed society, two of many victims memorialized outside of the Toulouse City Hall

Christian Pinchot, an Identitarian activist, wrote the book Sale Blanc! (Filthy White!), a chronicle of the rise of anti-white racism in France. He travels regularly to visit local Identitarian groups to promote the book. Also, the preferential treatment for immigrants in the allocation of emergency housing has become a national issue thanks to posters and through handing out prank coupons for free hotel stays that highlight the double standard. So we are hated for being white and the state is aligned with the invaders against us!

As long as those who govern us think there is an acceptable level of rape, murder, and mugging of white people, it is up to us to defend ourselves. Therefore the Identitarian Groups all across France organize self-defense seminars.

I believe it is very important to teach self-defense to women. I participated in teaching women self-defense techniques before any White Nationalist activism, and I probably never got beyond a third date without teaching some of the basics to a girlfriend. This is extremely rewarding work and addresses one of the most important threats posed to our future, the security of white women. The Identitarians have always worked on hand-to-hand combat training for members. Now that many members are advanced enough to teach others the invitation to train and learn is specifically targeting females. There are three elements that make this invitation successful: 1) women feature prominently in the advertisements, 2) emphasis is put on the event being open to beginners, and 3) fellowship building activities follow, in the example at the top of the article a concert that is specified as acoustic (translation: no screaming punk rock). [4]As pointed out by Yann Vallerie, leader of Jeune Bretagne [5], you should expect your activist core to be composed mainly of men, because most activists anywhere along the political spectrum are men. However, too often White Nationalists groups either don’t have any women, or the leader’s girlfriend is the only female member. To be an effective and attractive propaganda organization you must have active female members. Unlike a political party seeking electoral victory, parity does not have to be a goal, but their presence should be clear. Perhaps since part of the threat in Europe is the arrival of Islamic norms, it is easier to find motivated women than in the US. However, the “Let’s Live Together” and “Nice Girl’s don’t hate” brainwashing is as strong in Europe as in the US. [6]Nissa Rebela, the Identitarians of Nice, train on the Promenade des Anglais along the beach. This is the most prominent public space in Nice. So far, I am only aware of this being done in Nice.

I am not aware of the precautions taken and I am not sure if they needed permission from the city to set up their table. I do have some words of caution to those considering a similar action. If this event is publicized in advance there is the likelihood that “anti-racists” will come armed and in large numbers to disrupt activities. It is not worth putting members and potential members in danger unnecessarily. [7]However, flash demonstrations of force are possible and very attractive to potential members. Look into the laws regarding public demonstrations before this is tried, because authorities will show no mercy to any group questioning the enrichment that diversity brings to us. The Bloc Identitaire and the groups within the movement are registered associations under the Law of 1901. Requirements vary country-to-country regarding registration of groups and the responsibility such requirements impose. [8]Violence has taken over our subways at night. In regional trains that go to poorer neighborhoods there is a double digit drop in the percentage of women taking the subway at night. Rape and sexual assault at the hands of Black and Arab men is a national story. This issue was raised by the mass media (with references to race remaining a subtext) and awareness of the problem was widespread even among people who don’t live in poor neighborhoods or take subways.

With the foundation already laid by the mass media and with the existence of Identitaires being seen as a total shock to the mass media, this propaganda battlefield was perfectly prepared for a new front in the war for the French soul. Identitaires all across the country have been entering the subways en masse wearing matching yellow jackets with Identitarian symbols and the words “Generation Anti-racaille,” to borrow from Sarkozy’s famous phrase. They usually pass promotional material and invite the media. There has been one violent incident with “extreme left activists” in Lille, but others pass without incident. There is always a spokesman with the group prepared to speak with the media on predetermined talking points. The point of these patrols is not to replace the police but to emphasize that politicians are failing to provide enough police to keep the public safe. This is my favorite photo from the subway patrols. Almost every young White man has felt threatened and outnumbered at some point. The easy gaze of the White man paired with the downcast eyes and clenched jaw of the Arab thug has been an all too rare sight for more than a decade. Our youth will flock to the only group providing a solution. “The Change is Now!”

If any readers plan on doing the same, here are several more pieces of advice. It is important that this act has a clear political message and is not seen as simply gang activity. A group must exist with a public face and well-developed discourse that the media and political elite have taken notice of first. Do not announce the time and place publicly, but do invite the media. Bring between 10-30 activists (a group at least twice as large as any gang of thugs riding together who might feel provoked to act). Take lots of pictures and film yourselves. Keep the patrols short and maintain strong message control. The goal is to make a psychological impact on our people and our enemies, not to argue with our people or to fight with our Enemies.

Only the state can increase our security in public spaces. Make the failure of the state clear to people and make it clear to young whites that it is neither normal nor inevitable to be afraid of thugs from Africa in the land of our Ancestors. Make clear to women that you are the only ones taking pragmatic, future-oriented steps to secure their rightful place in public spaces. Most women are too practical to tolerate endless past-oriented romantic talk or present-oriented foolhardy acts that actually increase insecurity (a dead end for innumerable nationalist groups of the past). [10]In a recent poll by IPSOS (one of the most respected polling organizations of France), 70% of French said that there are “too many immigrants in France.” A staggering 64% of French no longer feel as if they are in their own country. The headlines for this are “The Poll that Kills” or “French are Less and Less Tolerant.” I wonder if Ghandi was ever described as “intolerant” of the English. Our movement has been no less dedicated to nonviolence than his; in recent memory, our people are no less servile than his were. Do our “elites” think that the Kurds of Iraq are as “intolerant” of their Arab neighbors as the residents of the 7th Sector of Marseille or Beziers. Well the people have spoken, so what do we do when we have too much of something? Making Remigration a proposal that cannot be ignored

The Identitaires and allied groups are beginning the discussion of Re-Migration. The Identitarians took to the streets to demand a referendum on Immigration, a policy that only the FN supports. There were between 1,000-2,000 people present. Unfortunately, the bishops of France did not instruct their flocks to join the march as they had for the Gay Marriage Law.

Renaud Camus, the homosexual novelist and more recently author of Le Grand Remplacement, whose politics is probably closer to Geert Wilders’ than our own, came to march alongside the Identitarians. Identitarians are developing a discourse of cold analysis and humane solutions around an issue that is the easiest for our opposition to pigeonhole in the context of WWII.

It will probably take more than 9 months for Jean-François Copé to adopt this line of discourse, and we should not expect Marine Le Pen to adopt it before the Presidential election. However, if a referendum on Immigration is ever held, Remigration is the obvious next question. We should expect such a policy to arrive in steps. Since 87% favor deportation of Gypsies, this may be the first step, though legally it is the most difficult.

Many commenters on the earlier article, “Taking City Hall [12],” wanted to know how many Identitarians there are in France. The truth is that I have no idea how many there are. Whatever the number is, I am sure that readers would have overestimated their numbers. These are Guerrilla PsyOps that seek to change the discourse in the media and the mindset of both Europe’s indigenous people and the invaders seeking to replace us.

The actions outlined above were planned years in advance as part of a comprehensive strategy. Most of the actions are not political and are focused on issues with 80/20 support . . . almost everyone would agree that French homeless should get at least the same benefits as immigrants, that women should be empowered to defend themselves, that subways should be safer, and that there are too many immigrants in France.

The Identitarians may seem very divided at first glance because of their regional focus, but there is discipline in their strategy and communications because the activist youth realize that there will be no second chances if we cannot save Europe from this invasion soon.

A few years ago the Unites States passed the point where non-white births outnumber white births. Let’s hope that activists emerge soon to turn back the Rising Tide of Color there as well.