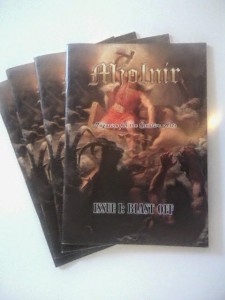 “Leftism is the lie writ large. In any case, the right knows that equality itself is a fabrication and can only be achieved and maintained by holding back those who strive for excellence. The opposite of equality is quality. So it is with art. Quality is known instinctively: go into any art gallery and answer honestly which you prefer, Ian Davenport or J. M. W. Turner. Mjolnir stands for quality; Mjolnir is therefore elitist and promotes spiritual elitism in all its forms.”—Mjolnir Magazine

With the money you will have saved from not buying Troy Southgate’s novel (see James O’Meara’s review here [3]), you really should pick up a copy of Mjolnir. Reading like a Searchlight [4] international list of traditionalist writers, reviewers, and artists, Mjolnir’s table of contents includes David Yorkshire (editor of Mjolnir, writer for Western Spring [5]), Jez Turner (the founder and chairman of the Iona [Islands of the North Atlantic] London Forum) reviewing A. K. Chesterton’s Leopard Valley, Gina Hunt reviewing David Hamilton’s Culture Wars, Boris Nad (Serbian author, artist and revolutionary thinker. [6]), Dragoš Kalajić (“one of the most significant artists, visionaries and Traditionalists of our European culture in the last quarter of the 20th century” –Open Revolt.info), southern traditionalist writer Patrick McClary, Yorkshire romantic-realist landscape artist J. W. Foster, a pseudonymous Australian poet going by the handle Clarence Cadel, and H. P. Lovecraft. Oh, and me.[1]

Mjolnir Magazine has been a long time in the making—Mr. Yorkshire mentions that he had hoped the late Jonathan Bowden might “spearhead such an undertaking” before he died. Ultimately it was up to David Yorkshire to bring this literary vision to fruition himself. And he’s done a fine job of it, gathering writers and artists “rooted in national and regional ethnic culture as well as in our shared European heritage” between covers that feature a full page color reproduction of Tors strid med jättarna (Thor’s Battle with the Giants) by Swedish artist Mårten Eskil Winge on the front and a smaller color reproduction, Asgardeien (The Wild Hunt), by Norwegian artist Peter Nicolai Arbo on the back. You may certainly judge this particular magazine by its covers, and it will not disappoint you.

Highlights of this journal include a two column page that catalogs people who deserve either a “Blast . . .” (“Moralists” . . . “Oscar Wilde” . . . “White self-haters who don’t have the courage of their convictions. Don’t just apologize, go kill yourselves.”) or a “Bless . . .” (“Hope Not Hate, Antifa and UAF for providing the semi-human detritus that proves human inequality,” “far right extremists, for they were once the mainstream . . .”). This may be an arts and culture magazine featuring top names in pen and paint, but damned if Mjolnir isn’t likeable too. There are so many self-important art and culture journals out there (all of them positioned somewhere on the Left, may I add) that either eschew any sort of light personability entirely or spend most of their editorializing being cheeky and ironic that this engaging human quality of Mjolnir is something to “Bless . . .”

Jez Turner, a fine writer with a long history in British far right circles, turns a review of A. K. Chesterton’s Leopard Valley: A Play in Three Acts into a succinct contemplation of both the play and the state (I was going to write “plight,” but I no longer feel we are in plight—we are now on the brink of the radical retaking of our destiny) of Europe today.

Leopard Valley? One immediately thinks of “the Happy Valley set,” “White Mischief,”’ and the mysterious murder of Lord Errol in 1930’s Kenya. Lord Errol was a dashing adventurer, Fascist sympathizer and an opponent of any war with Hitler’s Germany.

Strange (or is it?) to think how many such VIPs met strange deaths prior to the Second World War breaking out: Lord Tweedsmuir (Governor General of Canada) and T. E. Lawrence to name but two—better known respectively as John Buchan the novelist and Lawrence of Arabia. This play however is staged in an imaginary British colony loosely based on Rhodesia/South Africa and although there is an element of political intrigue in it, elements of the “anyone for tennis” comedies exist for light relief and of Agatha Christie’s “whodunnits” for added suspense. It appeals therefore at many levels, but it is the deep under-the-radar subtle politics relating to human nature, community organization, racial relations and leadership that interest us here.

In Boris Nad’s short prose piece, “The Lions of Kalemegdan,” historical account and personal experience collide while considering European traditions and lions. “In historical times, a little more than two thousand years ago, lions still lived in Macedonia . . .” and so begins a look at the “connection between kings and lions” that winds down to Nad himself writing on: “a late summer afternoon, almost evening, when climbing up to the Kalemegdan fortress, I wished to get up to that high plateau from where the confluence of the Sava into the Danube can be seen. . . . I spotted two lions, gallant and lazy, marching under the sun . . . a vision which might have been born of dream and which belonged to some other, almost mythical era, quite different from our own.”

This work reminded me of something that might have been included in an early issue of Hex Magazine—which is probably the only other contemporary journal that Mjolnir could be compared to, and even then it would have to be a loose comparison.

Another remarkable piece is “Padded Feet” by North Carolinian native Patrick McClary. Much like “Leopard Valley,” “Padded Feet” can be read on more than one level. At face value it is a well-wrought example of Southern horror (by Southern, I mean the southern United States) peppered with dialect and regional references to evoke the immediate-post-civil-war Carolinas. On another level, it contains “deep under-the-radar subtle politics relating to human nature, community organization, racial relations and leadership”—the horror faced is the aftermath of the war itself, the denouement the beginning of realization that Southerners –as a folk—must co-operate with each other to survive no matter how they feel about each other’s actions (or inactions) during the war against Northern aggression.

“Ronnie you cling to the war like a piglet to her mamma’s tit. ‘Course you had no reason to desert, you had nothing to go home to . . . maybe if you were older and had a few obligations weighing you down, you wouldn’t have been so ready to fight and starve for another man’s property in another part of the state . . . ” A pause and a gentle smile from [Ronnie] McDaris. “Liberty born of a patriot’s dream is what I fought for. Not for any man’s cotton or any man’s slaves. Men like myself and Vance understood that. Men who understood that the greatest obligations one can have is to one’s home and fireside. To keep unborn generations free from the crush of the despot’s heel . . .”

The artwork by Dragoš Kalajić is simply glorious (and I mean that)—there are over a dozen of his paintings reproduced here, only two of which are not shown in full color. They include some of his most famous works: Hyperborea, Svetlana, Of Our Inner Empire, and a two page spread of Knight of the Solar Order. During his life (he died in 2003) Kalajić was friends with “cultural luminaries such as Baron Julius Evola, Aleksandr Dugin, Ezra Pound, Enrico Crispolti, Giorgio de Chirico, Gualtiero Jacopetti, Ilya Glazunov and Mikita Mikhalkov. Evola himself once said to Kalajić: ‘You will renew the Roman idea.’” It is little wonder his work has been called the “real example of Aryan art” and it’s nice to see so much of it all together.

David Yorkshire’s own short story (I’d call it a speculative fantasy but it isn’t labeled as such) “The Wall at the End of the Garden” is, to use his own words, an effort “to reify the traditional eternal truths”—one of the truths being that “the difference between scientists and philosophers is that philosophers often frame the hypothesis and write the conclusion before making the experiment.” Considering what the philosophies of those who took control of the world did to the traditional world, that truth alone cost us millions (physically, monetarily and spiritually).

“Trees can be replanted. Machines can be repaired. And perhaps by chance I have stumbled across the most important experiment today.” He looked down at a half-shredded book by Rousseau. “You know, the French for experiment is experience. Perhaps I should have let you observe the world outside before you absorbed yourself in all those philosophical tomes. Perhaps the steel is there now, but we blunted it and let it rust instead of honing it and keeping it sharp . . .”

Yorkshire’s story puts into literary perspective radical notions that are sometimes difficult to pin down, and he does so with a style that is clear, engaging and classic. He states in the introduction to this story that he writes poetry and prose creatively—I hope that he’ll be bringing forth a volume of his own work soon, or that he finds a publisher he likes who will bring it forth for him.

Besides the works I’ve mentioned here, there are prose, poetry and art pieces ranging from full color traditionalist watercolors to Lovecraft’s poetry in this inaugural issue of Mjolnir. You’ll have to order it to see all of it for yourself, but it’s worth it.

Why is it worth it?

Beside the fact that it has interesting content, “Mjolnir is the first step in the cultural fightback against the tidal wave of leftist propaganda. Our enemies have vast financial resources at their disposal and can therefore invest in all the arts – especially that latterly invented form of Gesamtkunstwerk so conducive to indoctrinating the masses: film. We have not such means at our disposal . . . yet; but classical art forms are not beyond our means: graphic art, plastic art and literature are very much accessible to us. Mjolnir is a magazine set up to collate and showcase these forms of illiberal Eurocentric arts.” That’s why.

Here’s to Mjolnir Magazine [2] being long lived, well read and the first of many of its kind.

1. For review purposes, of course, I shall decidedly not write about my work included in this issue, other than to let it stand that I am quite honored to have 9 of my poems appear here.