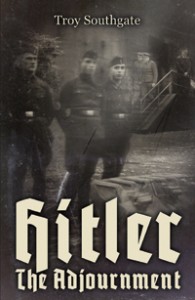 Reading this book right after Timur Vermes’s Look Who’s Back (reviewed here [3]) was quite a revealing experience. Although superficially in the same “What if Hitler . . .” genre as Look Who’s Back, Troy Southgate’s Hitler: The Adjournment is quite different, but not in a good way. In fact, the two books differ in almost every respect, providing a sort of Goofus and Gallant [4] guide to how to write, or not write, Hitler fiction.

One is the product of a major publisher, a best-seller in Germany, of all places; the other a fringe outfit — but on our fringe! — which has published some excellent work, such as Alex Kurtagic’s Mister. The one title teases, the other slaps you in the face. The cover of one is white, with a clever minimalist take on the famous side part, and clean modernist font; the other black, with a muddy photo of some soldiers embedded, the font some kind of old Fraktur that, in Vermes’s book, Hitler angrily rejects as the appropriate one for his “internetwork” homepage (rejecting “heimatseite” as well — “we are not antiquarians!”).

Continuing that impression, the grey pages and muddy typeface convey the impression of some ’50s conspiracy tract or political samizdat, making the reading of these hundred or so pages considerably more of a soggy Drang nach Osten than the nearly four hundred light and breezy pages of the other.

Here’s the plot of that journey, courtesy of Metapedia [5]:

The book begins with Adolf Hitler: Führer of the Third Reich, together with a few dedicated adherents and co-workers, managing to flee the chaos of the last days of the Second World War, more precisely from 30th of April, 1945 and onwards. The little gang of refugees manage to get through the hell-storm that Germany in 1945 was, even as the Soviet hordes and their allies from the West move ever closer by occupying ever larger parts of Germany. As Hitler manages to escape the city, the reader gets to know his more human side, something uncommon in regular media and history books. Defiant to the last, he refuses to give up, reluctant to give the Allies the satisfaction of putting him to justice for his alleged crimes. Instead, Hitler and his ever decreasing gang of followers approach their end goal: the Austrian Alps, where their friends are ready to help Hitler into hiding.

I must say, however, that this gives a quite misleadingly interesting impression of what’s in store for the reader. (What, misinformation on the internets?[1]). Since I don’t expect, or want, you to read it, I have no hesitation in revealing the later plot developments. The Metapedia summary gives us only about the first half of the book. Then, abandoning this Great Escape scenario, Hitler does eventually give up life on the run (who can blame him?) and apparently decides to settle down in a small German village, where he quickly strikes up an improbable on so many levels romance with the local innkeeper (a Fräulein, of course).

There’s a red herring in the form of a serial killer who starts up just as Hitler arrives; the villagers — of course, being German villagers — decide it’s the moustache-less Führer, and soon he’s being chased through the woods like Frankenstein’s monster.[2] Heroic Hitler just happens to surprise the real killer in the act — a local commie with poor hygiene, of course — and dispatches him, only to meet his demise at the crossbow-wielding hands of the innkeeper herself,[3] who turns out to be a partisan of Gregor Strasser eager to avenge the betrayal of the Left tendency.

Why this book? Surely not for the plot, which when not conventional, indeed, clichéd, is simply implausible. Now as I said — or implied — elsewhere,[4] an old school concern with plot (think Ayn Rand and Mickey Spillane, or Trollope if you prefer) can be trumped by a modernist concern with language (Joyce, Beckett, etc.).

But as a writer, as F. R. Leavis said of another political operative who thought he was a novelist, Southgate simply doesn’t exist. His specialty is the choice of the odd word, thinking this gives his work “style” of some kind. Consider some examples, thrown at us over the brief space of this text.

Right off the bat, here’s Southgate setting the scene, the Führerbunker: “Frozen forever like a scene in a microscopic theater, poised to state one of the most incredible and penultimate dramas in world history.” Why “microscopic”? How does that work, exactly? And look, here’s that high school English favorite, the confusion of “penultimate” and “ultimate.”

Or consider sunbeams, that “. . . streamed through the small window and illuminated millions of tiny dust particles, each performing a bizarre waltz brought on by the seemingly opposed forces of air and gravity.” How are air and gravity opposed? And are they, or do they merely seem opposed? Why bring it up in the first place?

Speaking of “bizarre”: “Meanwhile, like an impromptu scene from Richard Wagner’s Der Ring des Nibelungen, Hitler stared into the merciless flames in a bizarre gender reversal of Brunnhild’s vigil at Siegfried’s funeral.” What reader interested in this book in the first place would need all that spelled out — would “Wagner’s Ring” or even Götterdämmerung confuse? — in a book just barely over a hundred pages anyway? How is this scene “impromptu,” rather than just real life versus stagecraft, and what makes this “gender reversal” notably “bizarre” as opposed to any other?

As Hitler makes his escape he follows, “. . . two identical sets of lines that stretched off into the darkness like four sticks of uncooked spaghetti.” Some kind of path, I guess.

And this, the next line, I have no idea what it means: “Hitler felt like a foolish child who had exceeded the boundaries of acceptable behaviour by stepping off a ghost train and then discovering to his horror that he was completely unable to negotiate his way out.” Didn’t you hate when that happened to you as a child? I was about to throw myself out the window when I noticed that all this is still only on page 2, when I realized that “2” was a typo for “25.”

Hitler can’t catch a break: when merely attempting to gain sustenance by eating some canned rice pudding, “Some of it ran down his chin and hung there in rhythmic, transparent strands.” Why, and how, “rhythmic”?

And this poor chap who gave his arm for the Kaiser is given a coat sleeve that “Flipped in the morning breeze like a harlot’s stocking on a washing line.” Material? Velocity? What likeness, exactly?

Impatient Hitler has a face “shot through with a look of thunder.” So was mine, after, now 2/3 of the way through, I find a “fantastic rock garden containing some of the most beautiful colors that Hitler had ever seen” (and imagine all the colors he’s seen!) only to have this garden of delights snatched away from me by a full paragraph of botanical nomenclature conveying absolutely nothing to the lay reader. Even Hitler has to “conceal his limited botanical knowledge” so as to impress his new doxie; what’s the poor reader to do?[5]

I will skip over the bathetic rendering of the Führer’s telenovela affair with the innkeeper (whose head comes to rest on his shoulder “like a ship heading into port” — toot toot!) and just call attention to Southgate apparently giving up altogether and resorting to digging his elbow into the reader’s ribs: a smashed vase is “A tragic metaphor for the shattered pieces of Alarice’s broken heart.” You really must imagine the effect of this on the poor, diligent reader, for page after page, making, as I said, this bare hundred pages a considerably grimmer trek than Look Who’s Back’s nearly four hundred.

But at least we’re near the end, where we find the most curious piece of literary craft. As Hitler stumbles upon the real murderer at his task, “. . . he had battered the Hellman boy to a liquid pulp of oozing claret and broken bone.” Reminding us of how we had been struck by the oddness of this, right at the beginning, as Hitler fakes, as we assume and learn, his suicide: “Germany’s posthumous Führer began pawing at the thick claret that stained his jacket and trousers.” “Posthumous”? How so? Hell, why not “penultimate”? Pawing? Once again, I am reminded of Ignatius Reilly’s resemblance to the Führer. But again, why claret? Does spilled blood particularly resemble claret? It’s an oddly specific word, especially when repeatedly used like this in a small text. Is there some aesthetic reason, or did he just forget his thesaurus?[6]

So much for tactics, as the Führer might say. What about strategy, the big picture? Southgate, unlike Vermes, takes the superficially and seductively easy choice of employing the omniscient narrator. Consequently, we never, not once, get the sense of having any access to Der Führer’s idiosyncratic thought patterns; he and everyone else sound like generic characters in a Robert Ludlum airport novel: “Hitler’s mouth opened for a brief moment and then rapidly closed again, as he suppressed the unbearable urge to embark upon one of his notorious rants about Jewish economic interests and their control of the mass media during the Weimar period.” But on the bright side, we are spared the attempt to actually replicate one of those “notorious” (to whom?) rants.

It seems clear that Southgate wrote this book simply to provide a context for his pro-Strasser views. Even here, he really has nothing to say. For a few pages near the end, Hitler and the seductive Strasserite innkeeper bandy about some old arguments — Hitler, again, sounding nothing like Hitler, even if we could imagine him seriously arguing with a former BdM (Bund Deutscher Mädel) leader whom he’s taken as a lover — but nothing comes of it. Could Hitler not, rather than immediately embarking on a love affair, encounter a whole range of experiences on the run that might, perhaps, cause him to re-assess old Gregor’s position?

Vermes, to again avail myself of a handy, though invidious comparison has a similar scene at a similar point in his book — quoted at length in my review — but again the contrast couldn’t be greater. Hitler argues about much more important issues — the Holocaust, the destiny of the German Volk, and the necessity of winning in order to write history — and we sense a greater relationship between this Hitler and his “personal assistant” than between Southgate’s Hitler and his supposed new regular Saturday night thing.[7]

As short as it is, there is simply no reason, literary or political, for you to read this book, or even for it to exist. This is not the Hitler we are looking for, nor is it the Hitler we need.

, a far superior, indeed legendary, SF novel, with almost nothing in common, in theme or style, with Southgate’s novel, other than The Name.

[2] If Look Who’s Back suggests The Producers, here we are in Young Frankenstein country. The serial killer starts off with a couple of children, further suggesting the Frankenstein motif.

[3] Recalling the a crossbow killing and the creepy, statutorily raping, bad German-accented suspect Kruger in The Dead Talk Back (Mystery Science Theater episode 603)

[5] I do wish people who try to emulate Huysmans or Mann by incorporating huge swathes of scientific mumbo-jumbo into their writing would realize how difficult it is to do well, if ever.

[6] I almost feel that “Hellman’s boy” might hide a reference to Hellboy, the occult/Nazi movie reviewed [8] in Trevor Lynch’s White Nationalist Guide to the Movies (San Francisco: Counter-Currents, 2013), but that surely gives the author too much credit.