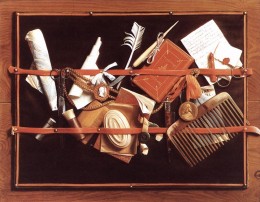 The following text is an excerpt from Yockey’s notes transcribed and annotated by Kerry Bolton. The style and format suggest the early 1950s.

Demetrius used to say that there was no difference between the words and the voice of the unlearned and ignorant and the sounds or noises from a belly full of superfluous wind. And he said, not without justice, that it seemed to him to make no difference from which part they emitted their voice, from the mouth or from below, since both were of the same value and substance.

There are men who deserve to be called nothing more than passages for food, augmenters of filth, and fillers of privies, because nothing else in the world is effected through them and they are without any virtue, since nothing is left of them but filled privies.

Accidents and individual variations mean little. No defeat has ever changed the destiny of a nation inwardly strong if it was not annihilated. Nor has any victory which was not founded on moral and intellectual superiority ever lasted.

Indeed, culture stands and falls with difference perceived and recognized. Only when the law of polarization as opposed to equalization obtains can there be culture.

Goethe: Reverence, which no man brings into the world with him, is yet upon which everything depends, if man is to become a man in every sense.

Keyserling – op. cit. If a man meeting another begins by thinking “I am as good as he is and accordingly treats him with familiarity, he will never learn from him, even though the other one be a god. On the other hand if reverence is the primal attitude even the greatest can learn, and always does learn even from the humblest.”

Even if a tired and effete mankind wishes to renounce wars, like Classical mankind of the latest centuries, like the Indians and Chinese today, it can only become – from having been the wager of wars – the object about which and with which wars are made by others. Spengler – P. and S.[2]

No parliamentary babbling or party politics are equal to our task, but only personalities, who know how to force themselves and their decisions through. Spengler from introduction to Korherr’s Essay on the Decline of Births.[2]

Woe to the general who comes on to the battlefield with a system. Napoleon.

Will, character, industry, and boldness have made me that which I am.

2. To the Spenglerian, population decline is a symptom of cultural decay. Dr. Richard Korherr addressed this problem, and his work, Decline of the Birth Rate, a doctoral thesis, written in 1925, inspired by Spengler’s Decline of the West, had a major influence on Fascist Italy’s population policy, where it was translated with a preface by Mussolini. Korherr became Inspector of Statistics under the Third Reich and survived “denazification” after World War II to pursue his academic profession, dying in 1989. Korherr’s influence prompted the formation in Fascist Italy of the National Organization for the Protection of Motherhood and Infancy.