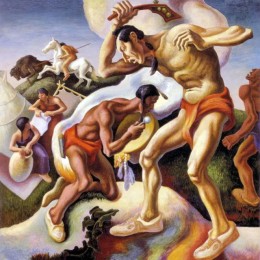 Feeling down? Feeling blue? Feeling unwanted? Feeling like goo? Feeling about as important and noteworthy as a noodle? Well, listen up! There’s hope ahead. New American Indian tribes are springing up almost every day in a city near you. Yes, just like a baseball or hockey franchise, some enterprising hucksters are creating new Indian tribes out of thin air. How? Well, let’s use my old home state, Kansas, as an example.

First, some unsavory scoundrel fresh out of prison invents himself a fancy Indian-sounding name (in this case, the “Kaweah Indian Nation”). Next, said scam man dubs himself something that sounds grand, dramatic and Indian (in this case, sounds also like a fast car, “Grand Chief Thunderbird IV”). Then, our new chief gets himself a bunch of willing tribesmen, tribeswomen, and tribeskids (in this case, illegal Mexicans). And there you have it. Simply that simple. Wham-O!  Our ex-con is now right up there with Sitting Bull, Geronimo, and Tonto.

Why would someone do something like this, you might ask? Come now! Who wouldn’t want to have their own Indian tribe to lead around? There’s a ton of perks involved. All that victimitude is pretty swell, too. Soon, quicker than you can say “Runnin’ Bear loves little White Do. . .” many pale faces—many more than already are out there–will be braiding their hair and claiming with quiet pride and dignity that they too are a quarter of whatever you are, in the Kansas case, “I am a quarter Kaweah.” Best part, of course: You can start your own casino and, in a year or two, you can move out when the mafia moves in.

Seems many others around this great land of opportunity, many others like Grand Chief Thunderbird IV, are selling certificates of Indianhood to any Mexican who can fish up five bucks. In the Kansas case, GCT-IV set up two recruiting offices in the state and signed up at least 10,000 Mexicans . . . er, I mean “Native Americans.” That, dear reader, makes the Kaweah Tribe one of the largest in North America. Suddenly, the Mexicans were not only instant U.S. citizens but they were suddenly privileged, honored, revered, deeply religious, and profoundly philosophical citizens to boot (odd, but the Kaweah language sounds very similar to modern Mexican).

As far as the Kansas scam, the feds finally did something right and put the hammer down on this little operation by arresting GCT-IV and closing up his recruiting stations. With the scheme uncovered, however, an illegal alien advocacy group shifted to damage control by justifying its criminal members’ criminal actions.

Cry me a river.

Note #1—Certainly an estimated 11-30 million illegals running loose in this country is a bullish market waiting to be tapped. I‘m sure that in their struggle to achieve the American Dream of “crime without punishment” these illegals are open to just about any scam waiting to happen, including fake Indian tribes. And really, since many Caucasians already also altogether all the time claim ancestry in this tribe or that tribe—“Me? I’m a quarter Cherokee . . . and so wuz my mom and dad”–why not plug into some of our own unemployed Americans, including the white swamp savages living in the woods down here in Florida, to form fake Indian tribes? The U.S. would become one big casino where we could all play the victim card and sue ourselves every other year for past grievances. Splendid. Mexicans? Don’t need no stinkin’ Mexicans!

Note #2—I once belonged to a historical group in Kansas and in that group was a middle-aged woman who showed up at a meeting or three wearing beads and buckskin and looking like some Indian princess from “F Troop.” I noted that she seemed fairly “normal”—sat quietly, feigned interest in whatever bore we had speaking that night–she was a school teacher, I think–but maybe just a bit flaky overall and clearly a mile or more “out there.” I also noticed that her hands trembled uncontrollably when I spoke with her. She told me–and anyone else who would listen–that she was a “Native American” and then rolled right into the solemn religion/philosophy shtick (“We Indian people believe. . . .”). One night I spoke to this same historical group about my book, Scalp Dance, a very graphic account of the savage fight on the plains between the red and the white man. At one point I pointed out the point that Indians not only raised torture to a high art form but they regularly engaged in some pretty nifty atrocities, as well. The lady arose and walked out in a huff. Now, so help me, this woman was the palest Indian the Great Spirit ever created. She would be considered an extremely fair blue-eyed blonde even in northern Norway. Truly, there are some very desperate white folks out there—real Indians themselves laugh and call these suffering, searching identity-seekers “white wannabes.” [2]Note #3–Elizabeth Warren, current U.S. Senator from Massachusetts, also states, presumably with a straight face, that she is part Indian. Clearly, Liz is riding that animal for all it’s worth. No real surprise, I suppose, but Ms. Warren looks amazingly like the nut ball school teacher I mentioned above.

Note #4—Another thought on the Indian princess above. Perhaps there is no better testament to how successful has been the Jewish war against we whites and their efforts to hammer home our unique guilt with their “Red Man All Good/White Man All Bad” hate fest, perhaps no better example is out there than the great number of American whites who claim with “quiet pride and great dignity” that they are part Indian. As noted above, “a quarter Cherokee” seems to be the going rate of exchange. With their long hair dyed jet black and parted down the middle (braiding is optional), with their fingers sporting chunks of turquoise that would make a Navajo jealous, with their spray tan necks adorned with colorful beads and talismans, these sick puppies will go to laughable lengths to cross the racial divide from loathsome white to noble red. Clearly, in their words and ridiculous actions, they prefer to identify with that drop of noble Indian blood circulating in their system rather than their gallons of European DNA; clearly they prefer to side with innocent victims rather than the vicious victimizers; clearly they prefer to be thought of as a peaceful, pastoral, philosophical, patient, deeply religious, stoical, and far-seeing visionary, rather than a blood-thirsty, grasping, cunning, and cruel anti-human monster.