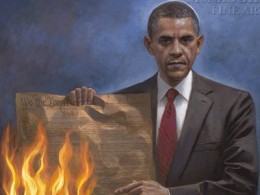 And yet, he’ll be remembered in the media, insofar as he will be remembered at all, for his analysis of the so-called Clash of Civilizations, a challenge to the End of History. He’ll also be outright demonized for his final book, Who Are We?: The Challenges to America’s National Identity [2]

What may be surprising to some is that the American Right called him un-American – because he was not optimistic enough. The Claremont Institute declared [3] he didn’t show enough respect for “that optimism [which] sets us apart from much of the world, fuels our entrepreneurial spirit, encourages immigrants seeking a better life, and inspires us to encourage democracy around the globe.” It called for faith.

A popular Internet film from libertarians is actually entitled The American Dream [4]. It centers on the Rothschilds, the Federal Reserve, the inflation tax, and the other themes familiar to the libertarian Right, especially those that flirt with critiques of Jewish power. It’s well-made, funny, and its multiple postings combined boast well over three million views. But of course, the premise is that a stupid, ignorant, weak, blue-eyed white guy must be educated and informed by a charismatic and masculine black guy.

These ideas are symbiotic and complementary. Both the American Left and Right contribute arguments towards breaking apart the historic American nation, either as an obstacle to equality or an obstacle to growth. Both urge the replacement of the actually existing nation and culture in pursuit of an abstract ideal. And both, ultimately, define the ideal in terms of liberation from the old – either from regressive social norms or state limitations on economic activity. America may have been, in the words of Robert Kagan, one of its neoconservative defenders, “born to die [5].”