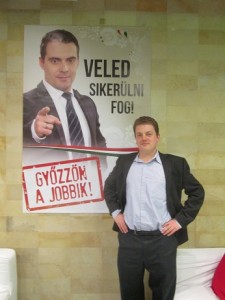 Yesterday (Sunday, April 6), the national parliamentary elections, which are held every four years, took place in Hungary. This election was particularly notable in that it was the first time that those of Hungarian ethnicity who reside in other countries were allowed to participate – a significant change considering how many Hungarians live outside of Hungary’s borders at the present time, most especially in those territories which it lost following its defeat in the First World War.

The Hungarian parliamentary elections work in a somewhat unorthodox manner, with voters having to choose both from a list of candidates from each particular party on the national level, as well as for deputies from those parties for their own specific county or district.

No one seriously expected that the popular Center-Right party Fidesz, which has governed Hungary since 2010, would not be victorious again, and sure enough, Fidesz, in a coalition with the Christian Democratic People’s Party, won over 44% of the vote, giving it 133 out of 199 seats in parliament, and securing a two-thirds supermajority in representatives, which means it can continue to make changes to the national constitution without the consent of the opposition.

Nevertheless, Jobbik, the more radical contender on the Right in Hungary whose success has been inspirational to nationalist movements across Europe, made significant gains. Having been founded just over a decade ago in 2003, Jobbik polled at less than 2% of the total vote when it fought its first election in 2006. It surprised the world by placing third among Hungary’s parties and garnering over 16% of the vote in 2010. Yesterday, Jobbik won over 20% of the vote and 23 parliamentary seats, again placing third, and making gains even in the highly liberal capital city, Budapest. This was quite an extraordinary feat for a party that has been branded as “extremist” and “fascist” both at home and abroad, and whose message reflects an uncompromising commitment to a genuinely Right-wing perspective and traditionalist values. Jobbik is known for its defense of the Hungarian people, both within and outside Hungary, and particularly as against Hungary’s Roma population; opposition to liberalism and globalization; opposition to Zionism; and opposition to the European Union, the United States and NATO (part of its party program is to take Hungary out of the EU), which it says treats smaller countries like Hungary as nothing more than a cheap labor force to be exploited.

I was fortunate enough to watch the election returns as a guest of Jobbik at their campaign headquarters yesterday evening, and I had the opportunity to speak with Márton Gyöngyösi, Jobbik’s International Secretary, about what the party’s hopes had been going into the election and their reaction to the results. He told me that Jobbik’s primary goals in this year’s election were to displace Unity, the Leftist coalition, for the number two spot among the parties; to prevent Fidesz from securing another supermajority; to capture the deputy positions in as many counties and districts as possible; and to increase their general numbers among the national electorate. It was only in the last point that Jobbik was ultimately successful.

Unity is not itself a party, but rather a coalition of five socialist/Leftist parties who joined together simply for the purposes of fighting in the election, given the severe loss in support suffered in the 2010 elections by the previous number-two party in Hungary, the Hungarian Socialist Party (which regards itself as the successor to the Communist party which ruled Hungary between 1956 and 1989). Jobbik does not see Unity as serious political rivals, however, since the parties involved have little history of working together outside of the election campaign. Nevertheless, Unity was successful in securing nearly 26% of the vote and 38 seats in parliament, and won the deputy races in two counties, as well as in the deputy races in many districts of Budapest.

It should be noted that the fourth-place party after Jobbik was the Lehet Más a Politika (“Politics Can Be Different”), a Green party, which garnered less than 6% of the vote, and only 5 parliamentary seats. This was just barely sufficient to enable the party to enter parliament at all (5% being the minimum required). This is a clear indication that Jobbik has handily established itself as one of the only serious contenders for national leadership.

During the early phases of the election returns, it seemed as if Jobbik would win the deputy slot in Miskolc, the fourth-largest city in Hungary and a long-time stronghold of Fidesz, but once all the returns were in Fidesz managed to maintain a razor-thin majority. As a result, Jobbik did not win in any of Hungary’s deputy races.

Despite these setbacks, the fact that Jobbik is an actual party, as opposed to Unity, which is merely an alliance of many parties that are unlikely to work together in parliament, means that Jobbik stands as the second-most powerful political party in the Hungarian parliament today.

Márton Gyöngyösi noted that the balance of power between Hungary’s parties was largely unchanged from the 2010 election, which was disappointing for Jobbik. Nevertheless, he was pleased to see the increase in the number of voters who supported them, indicating that their message is beginning to resonate more and more with Hungarian voters.

When asked what Jobbik needed to do to position itself as a serious challenger to Fidesz’s domination, Gyöngyösi said that the party needs to find a way to appeal to voters in historically liberal Budapest. A look at the numbers shows that Jobbik is already the second-most popular party in many of the rural regions of the country, which are traditionally, and unsurprisingly, the most Right-leaning sector of the nation. While Jobbik increased its numbers in Budapest as well, it still received only slightly more than 10% of the votes there. With a population of two million out of a nation of nearly ten million people, a party’s success in the capital city is crucial to achieving victory. But as of now, Jobbik hasn’t succeeded in finding a way to attract significant support there, which Gyöngyösi said would be a top priority for the party moving forward.

Several Jobbik members also suggested to me that Fidesz’s popularity largely hinges upon that of its charismatic leader, Prime Minister Viktor Orbán, and that his eventual departure from the party could greatly reduce their appeal. Several Hungarians I have spoken with have also indicated that many voters who once supported Fidesz unconditionally have grown more skeptical about it, and their support for Fidesz was more reserved and hesitant this time around given Hungary’s persistent economic troubles. This is supported by the numbers, as Fidesz, while it remained dominant, saw its numbers drop significantly from what they were in 2010.

Gyöngyösi sees hope for his party’s future in the fact that Jobbik has attracted a great deal of popularity among Hungary’s youth, and most especially among university students. Opinion polls have indicated that Jobbik is the most popular party among approximately one-third of students. If present trends continue, as these young people grow older and become more active, Jobbik could be well-positioned to surpass its rivals in 2018 or 2022, barring any unforeseen changes to Hungary’s political landscape.

Those of a Rightist inclination should not be disappointed that Fidesz remains in power, however. While I find the policies and general political philosophy of Jobbik to be much more compatible with a “true Right” (to use Evola’s term) perspective, it cannot be questioned that Fidesz has done a great deal of good for the country, and would itself be considered “extremist” by Western European or North American standards. (I have been told that articles by the French “New Right” gurus, Alain de Benoist and Guillaume Faye, have been published in Fidesz’s party newspaper, for example.) Given that Jobbik and Fidesz combined accounted for 65% of the votes cast, this would seem to indicate that Leftist parties simply lack appeal for the vast majority of Hungarians and are unlikely to reestablish themselves in the immediate future. I suppose this is unsurprising in a country that had Communist rule forced upon it for nearly half a century, something that is still fresh in the memories of many Hungarians.

What is certain is that Jobbik is not a passing phenomenon, nor a force that can be ignored, and it is likely to remain a significant factor in Hungarian, and European, politics for years to come. This poses a serious counterargument against those who hold that the only way that Rightist parties can succeed is by moderating, since Jobbik has little history of watering down its messages, which are quite bold, to assuage the complaints of its critics. Given Jobbik’s highly innovative geopolitical stance (which favors an alliance of Hungary with Russia, Turkey and Germany as a bulwark against the EU and the United States), its critique of capitalism, and its adoption of some of the perspectives of traditionalists such as René Guénon and Julius Evola, this also suggests that many people are looking for new and innovative ideas on the Right as opposed to the recycling and repackaging of the same, tired conservative slogans of the past. The Right of the future, if it is to achieve anything, will be a very different Right (and may scarcely be “Right-wing” at all, in conventional terms).

Given the sudden increase in popularity of “radical” Right-wing parties across Europe in recent years, most notably in France, Jobbik seems to be only a part of a growing trend. Europeans, and young people in particular, have awakened to the fact that liberalism has and is continuing to fail to meet the needs and desires of our people. If we want to see where the vigor and innovation lies in the European political scene today, we must look to the Right. Tomorrow belongs to us.