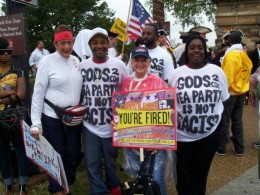 Turn on the television. Read a mainstream media website. Try and listen to a politician give a speech. This accumulated filth, this celebration of mediocrity, this Third World carnival of grotesqueries is America. When the highest ideals of a nation are freedom, equality, and liberty, how could it lead to anything but this? And to paraphrase Göring, when one hears the word “liberty” today, how can a decent man do anything but draw his revolver?

In marketing, they talk about the “elevator speech,” where you have to give your case in the amount of time for one journey on an elevator, maybe 10 seconds. This is too long. What is our counter to the word “freedom”? What is our counter to the word “equality”? While ideologically, words like hierarchy or greatness are closer to the essence of the North American New Right, the word identity is the most relevant. That’s what we’re about, and that communicates everything else that needs to be said.

Looking at the American Revolution, we can see how specific grievances and motivations can eventually be turned into historical forces that lead to not just unexpected, but opposite conclusions of what the original activists would want. Therefore, every popular, specific grievance has to be expressed in identitarian terms. Obamacare is a wealth transfer from one racial group to another. The knockout game allows blacks to target whites for beatings with impunity. All of this kind of stuff is popular on conservative websites, but always portrayed as a rejection of Martin Luther King’s colorblind ideal. Instead, it should be expressed in terms of one group attacking another group.

For example, the League of the South is doing a demonstration against what they call demographic displacement. “They are trying to replace us.” This is the best way to communicate the message.

But breaking that loyalty to the larger American ideal – waking up from the American dream – is still the biggest obstacle. This is hardly an unusual problem. One of the early influences on German National Socialism was the situation of the Germans under the Austro-Hungarian Empire. They were the core of the state; they created the state and sustained it; but the state discriminated against them. The Empire’s priority was to hold it all together, to appease all the various squabbling ethnicities. The ruling Hapsburgs took the Germans for granted.

One can see the same kind of situation with Russia today, where the somewhat conservative Putin sees his job as holding Russia and its various groups together, not advancing the interests of the white Russian people.

Or, to use a fictional example, consider a popular video game from a couple years ago, Skyrim. The player undertakes his quest against the background of a civil war in a cosmopolitan Empire composed of several races. The northern province, Skyrim, is the home of the Nords, a blonde-haired people who despise magic, favor two-handed weapons, enjoy the cold, and believe the valorous dead go to a glorious afterlife where they can feast and fight for eternity. (Sounds familiar.)

They created the empire. One of their greatest heroes was actually the first emperor, whom they later deified. They are the backbone of the army and the civil service. However, out of weakness, the Empire is forced to sign a treaty with a foreign race – here, elves, who force them to stop worshipping a Nord as a god. The elves believe they are uniquely chosen to lead the other groups – and to enforce this, they have a network of enforcers, spies, and watchdogs – which though not part of the government, supervise it and make sure the Nords don’t get any ideas. (Who does that sound like?)

The player has to choose which side to support – on the one hand, a united Empire is in some ways stronger and it belongs to the Nords in some essential way. On the other hand, the state is mobilized against the Nordic people. Of course, the downside from the modern perspective is that the Nordic freedom fighters are accused of being racists.

Perhaps the closest parallel to the American situation is the timely example of South Africa. The preeminent ethnonationalist movement in South Africa was the Afrikaner Resistance Movement (the AWB [2] — Afrikaner Weerstandsbeweging), the Boer nationalist organization headed by the late Eugène Terre’Blanche.

There is a grim joke about white South Africans – they would rather be murdered in their bed than have to make it. But this is not true about Boer nationalists – they knew exactly what their problems were. They knew cheap labor drove their dispossession. They knew international capital was their main enemy. They knew big businesses was meeting with the ANC. They knew traditional Afrikaner institutions had been corrupted. Yet despite their core ideological soundness, the AWB failed miserably to secure the freedom of their people.

The AWB had some personal problems, most notably over an alleged affair between Terre’Blanche and a female reporter. But part of it was also the idea that they couldn’t decide if they were supporting South Africa or breaking away from it. One day there was a call for a Boer homeland. The next day they supported the South African police. They claimed they opposed both communism and capitalism – which of course allowed businessmen to be trotted out, condemning the AWB as socialist. They also used symbols which resembled those of National Socialism – allowing the liberal church members to condemn them as anti-Christian.

Ultimately, the AWB pushed for a secession plan to secure the Volkstaat – but were betrayed by conservatives who thought they could get a promise of consideration from Nelson Mandela. Obviously, it didn’t work. The AWB petered out in a bombing campaign.

This brings us back to where we are now. We have the challenge of breaking away the core population from the state they created. We have to break the loyalty of a people towards something they say is theirs, including the personal ambitions tied up in it – careers, ties to institutions, and established connections.

Eventually, the smarter people among our population need to reject the larger American Empire because they see no way they can rise to the top in it. Part of that may already be happening – after all, even the presidency is now an affirmative action job. But most people still think they can succeed in the existing system if they just keep their heads down – or sell out in a vocal enough manner.

We have to wake them up from the American Dream.