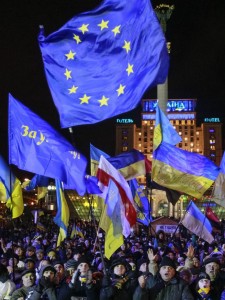 The events in the Ukraine have a single cause. The whole thing was triggered by the European Union’s proposal of a commercial and economic association as a prelude to Ukraine’s entry into the EU and NATO. The now fallen President Yanukovych accepted this proposal because of the financial situation of his country.

The Russians could only see this as a provocation, i.e., an attempt to move Ukraine from the Russian sphere of influence and align it with the EU-US duo. The Russians then made ​​a counter-proposal of financial assistance to Ukraine. The Ukrainian government caved in and terminated the agreement with Europe in favor of the Kremlin proposal.

This was the beginning of the explosion, of the revolt led by Ukrainian nationalists, who are anti-Russian and “pro-European,” according to the journalistic vocabulary. After riots that killed about 150 people (much fewer than in the clashes in Northern Ireland),[1] what the Russians call a “coup” took place. The Ukrainian Parliament (Rada) returned and removed Vikor Yanukovych, who had been elected by universal suffrage, it is true, although this has never mattered much to the Kremlin.

Russia obviously exploited these events to regain control of the Crimea, ceded to the (purely symbolic) Soviet Republic of Ukraine by Nikita Khrushchev in 1954 and mainly populated by Russian speakers. The geopolitical reality is most compelling, and Putin’s reaction is quite understandable — although he oversteps international law — since the Russian fleet is stationed in South Sebastopol. The Kremlin can not strategically allow Ukraine, which was the cradle of Russia and includes Russophiles and Russian speakers in the East and the South, to fall into the “Western camp,” which for Putin means the EU-NATO ensemble under American influence.

It is clear that Yanukovych was a satrap and an autocrat, but no more so than 60% of the leaders of the world. And his regime (and Russia’s) do not approach the despotism observed in China, Venezuela, and many countries in Asia, Africa, and the Muslim world, with which the “free world” — the smug defenders of the Rights of Man — maintain the best of relations.

The presentation of the Ukrainian affair by Western politicians and media (including the buffoon Bernard-Henri Lévy) as a struggle for democracy is completely wrong. It arises from geostrategic interests within a country divided between a pro-Russian and Russian-speaking East and an anti-Russian, pro-European population in the West. A tragic situation in the heart of Europe that should not have been exacerbated.

In this regard, the European Union has been irresponsibly provocative, kicking an anthill, by offering Ukraine eventual membership.[2] Likewise, the Ukrainian parliament, after the establishment of the new interim regime, voted to abolish Russian as an official language in a partly Russian-speaking country, which is hardly evidence of democracy. That delivered Putin a pretext on a silver platter. He has accused the new regime, which is illegal in his eyes, of nationalism and “fascism” and threatening the security of Russian speakers, who look to Russia for protection. [2]But worst of all is the impudent reaction of the U.S. government. President Obama and Secretary of State John Kerry (with whom are aligned the French Socialists who are now more Atlanticist than Chirac and the Sarkozyite Right) threatened Russia with economic sanctions and exclusion from the G8, accusing her of violating international law and the UN Charter in her military intrusion into a sovereign country. Kerry spoke of the “invasion and occupation of Ukraine.” He said: “In the 21st century, you should not behave like in the 19th century by invading another country.”

The Secretary General of NATO, Anders Fogh Rasmussen, added to the provocation (what does NATO have to do with it anyway?), saying: “Russia’s actions in Ukraine violate the principles of the UN Charter. This threatens the peace and security in Europe. Russia must stop its military threats and activities.”

What incredible gall . . . The United States invaded Iraq under a false pretext without a UN mandate; they cheerfully violated the Charter, leaving a chaotic situation; and they presume to preach to Russia. The mind boggles. This nervousness is also explained by Russian slap in the West’s face over Syria.

An important point should be noted: unlike socialist France, which is aligned with Washington,[3] Germany’s Merkel has adopted a “Gaullist” position as the best interlocutor of Russia, the most likely to negotiate the crisis. Frank-Walter Steinmeier, Foreign Minister, has rejected the U.S. proposal to exclude Russia from the G8, a realist position, unlike that of the Quai d’ Orsay, Foreign Office, and U.S. State Department.

We can draw only tentative conclusions, because the Ukrainian crisis is not over.

1. It is a pity that such a conflict broke out in Europe between Europeans of the same stock (i.e., Slavic cousins), while a non-European colonial invasion, as we know, is well underway. This is reminiscent of the civil war in Northern Ireland. We tear into one another while our real enemies are completely different.

2. Ukraine is probably not a viable country in the medium term. Its partition, with Russia annexing the East and South, is both politically obvious and an insurmountable problem for international law. It is a matter of the doctrine of nationalities at the foundation of international law. Ukraine will break up sooner or later. Morality always yields to facts. Cedat lex reibus.

3. The Ukrainian crisis will revive the Cold War against Russia, which is a terrible mistake.

4. So-called “pro-European” Ukrainians have no idea of what will happen if they join the European Union: uncontrollable immigration far worse than the imagined Russian menace, loss of border controls, and partial loss of sovereignty.

1. No serious investigation has determined who was responsible for the deaths, nor who were the snipers who killed protesters. The responsibility of the Yanukovych regime is not proven. The Western media have not identified the shooters.

2. The entry of Ukraine into the EU would be an economic headache. Dangling that possibility was part of a political maneuver that the Kremlin interpreted as a provocation.

3. Mr. Hollande was received like the king of the Moon by Obama in Washington (state visit) and was totally bamboozled. Flattered like a poodle, he wanted to improve his image but did not understand the script: put France on the road to Atlanticism just when Germany steps off and enters a major economic partnership with Russia.