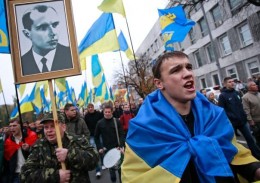 White Nationalists believe that multiculturalism—i.e., racial and ethnic diversity within the same state—leads inevitably to conflict and bloodshed. Therefore, the best way to insure peace and harmony is to replace multiculturalism with ethnonationalism, which is the principle that each distinct people should have its own homeland.

The strife in the Ukraine is not, at root, caused by Russian or “Western” intervention, for these would find no purchase if Ukraine were not already an ethnically divided nation. Although Ukraine is overwhelmingly ethnically Ukrainian, like Yugoslavia and Czechoslovakia, it is still an artificial state containing a number of distinct national groups: Ukrainians, Russians, Tatars, Poles, Bulgarians, Hungarians, Romanians, Moldovans, Armenians, Jews, etc.

The Crimean peninsula was part of Russia from when it was wrested from the Turks until Nikita Khrushchev attached it to Ukraine in the 1950s. The Crimea contains a large ethnic Russian population and Russia’s Black Sea naval base.

Even in the absence of outside intervention, the ethnic and linguistic diversity of Ukraine is a recipe for conflict. Such conflicts can be mitigated or postponed by such policies as federalism, decentralization, assimilationism, or granting quasi-autonomy to restive minorities. Such half-measures are perennial temptations, based on the hope that one can hold onto territory and resources by placating or corrupting or co-opting the leaders of other ethnic groups.

But the problem of ethnic or racial diversity can only be settled, once and for all, in two ways.

First, there is the Czechoslovakian model: like the Czechs and the Slovaks, the different peoples of the Ukraine could simply “divorce” and go their separate ways, partitioning the country between them. Once the country is partitioned, people would be free to move at their leisure to whichever nation they prefer. Crimea and other parts of Eastern Ukraine could, if they wished, join Russia.

Second, there is the Yugoslav model: through civil war and military intervention, Ukraine could be partitioned along ethnic lines, although at the cost of great suffering and bloodshed. Instead of peaceful, voluntary population transfers, there would be forced ethnic cleansing.

And, since neither Russia nor the United States can resist meddling in such conflicts, the stage would be set for a much wider conflict, even a Third World War. The First and Second World Wars started with small, regional disputes too.

Furthermore, even in the absence of outside influence, Ukrainian President Viktor Yanukovych had to go. Yanukovych is a crook who plundered his country and was essentially selling its geopolitical alignment to the highest bidder in order to retain his grip on power. Yanukovych was from Eastern Ukraine. He is of Russian, Polish, and Belarussian descent. His regime and his power base already leaned toward Russia. But what decided the matter is simply that Russia was the highest bidder. Thus, from an ethnonationalist point of view, Yanukovych had to go, not because he chose Russia over the West, but because no self-respecting people can tolerate its destiny being sold to the highest bidder merely to keep a criminal in office a little longer.

It does not matter if such a criminal regime was democratically elected. Legitimacy derives from serving the common good, not getting the most votes in an election. It does not, moreover, matter if such a regime is deposed by violence and lawlessness, since the good of the people is the supreme law, and Yanukovych left no other options.

One of the most remarkable features of the Ukrainian revolution is the open participation of far Right groups, most prominently Svoboda (Freedom) and Right Sector, which is a more radical, activist-oriented group that split off of Svoboda. These groups are being smeared as “neo-Nazis” by both the anti-American Left, which is always eager to paint US interventions in the worst possible light, and by the Russian regime, including its apostle and apologist to the Far Right, Alexander Dugin, whose credibility with ethnonationalists should be reduced to zero by now. Some Leftists are even deeming Yanukovych’s overthrow the “Brown Revolution.”

It is a lie, however, to label the Ukrainian revolution “neo-Nazi,” for two reasons. First, Right Sector and Svoboda were only part of the coalition that brought down Yanukovych, which also included centrists, Leftists, feminists, gay rights advocates, and ethnic minority agitators, including Jews, Tatars, and Armenians.

Svoboda was founded in 1991 and is one of the five leading parties in Ukraine. Its strength is based in Western Ukraine. Svoboda regards Russia as the chief enemy of Ukrainian sovereignty, which is obviously true, but Svoboda is not pro-EU or NATO. Svoboda is a nationalist populist party, which quite clearly draws inspiration from German National Socialism, but with a post-War, pan-European sensibility. Ukrainians are also well-aware that Hitler wanted to make Ukraine a German colony, not an independent nation. Svoboda leader Oleh Tyahnybok has been widely criticized for his anti-Semitic statements, but he has never backed down. The World Jewish Congress has called for Svoboda to be banned. Svoboda members and sympathizers also draw inspiration from Traditionalism, the European New Right, and the writings of Kevin MacDonald. Svoboda members and sympathizers are, moreover, among Counter-Currents’ healthy Ukrainian readership.

Of all European nationalist parties, Svoboda is probably the most radical and consistent, yet it is also one of the most successful. It deserves to be studied and emulated. Unfortunately, despite an admirable political platform, Svoboda is at present committed to maintaining the artificial Ukrainian state.

That stance could change, however. Indeed, Svoboda is the only Ukrainian party that could appeal to its fundamental principles to ratify the loss of the Crimea and Eastern Ukraine, should the widening Russian intervention make that a fait accompli. Furthermore, since Svoboda’s power base lies in Western Ukraine, the loss of the East would increase its percentage of the overall electorate.

The new interim government in Kiev appears to be as corrupt as the old one. Ukraine’s political culture as a whole is one of the most corrupt in Europe, which is the cause of widespread cynicism. As long as Svoboda represents the interests of the people and stays relatively aloof from corruption-as-usual, they will only gain in future elections.

Like many White Nationalists, I admire Vladimir Putin because he is an important geopolitical counterweight to the United States and Israel (blocking the road to war in Iran and Syria), he has sought to address Russia’s demographic crisis, and he looks and acts like a real-life James Bond. But Putin is not an ethnonationalist. Indeed, he imprisons Russian nationalists and is committed to maintaining Russia’s current borders, which include millions of restive Muslims in the Caucasus.

Putin’s interest in the Ukraine is purely geopolitical. He is playing chess with NATO. His only concern with Russians in the Crimea or pro-Russian Ukrainians in the East is the pretext they provide for interventions that might strengthen Russia’s geopolitical standing at the expense of NATO.

From a global White Nationalist perspective, anything that weakens NATO and the US is a good thing, but I cannot approve if it conflicts with the ultimate principle of ethnonationalism. If, however, Putin were to take back the Crimea, virtually ridding Ukraine of its Russian and Tatar minorities and leaving Ukraine smaller but more racially and culturally homogeneous, it might be a case of doing the right thing for the wrong reason.

The one power that has absolutely no business in the Ukraine is the United States. The US has been pursuing a recklessly anti-Russian foreign policy since the collapse of the USSR, egged on largely by Jews consumed by a neurotic hatred of Russia. Americans need to wake up and speak out before the same people who sold us the ruinous Iraq and Afghan wars light the fuse of World War III.

Counter-Currents will continue to follow the Ukraine crisis. We will publish articles by and interviews with Ukrainian nationalists and others who are there on the ground. As a White Nationalist, I believe in nationalism for every nation, and I hope that the Ukrainian revolution leads, eventually, to national autonomy for all peoples within the current Ukrainian borders. I also wish the best for Svoboda and other Ukrainian racial nationalists, who might well bring about such a bright future and serve as models for other European nationalist movements. White Nationalists in North America will do whatever we can to lend moral support and fight against US intervention.